What Was Missing from Trump’s Inaugural Address?

John Fea teaches American history at Messiah College in Grantham, PA.  He is the author of Why Study History?: Reflecting on the Importance of the Past. He blogs daily at www.thewayofimprovement.com 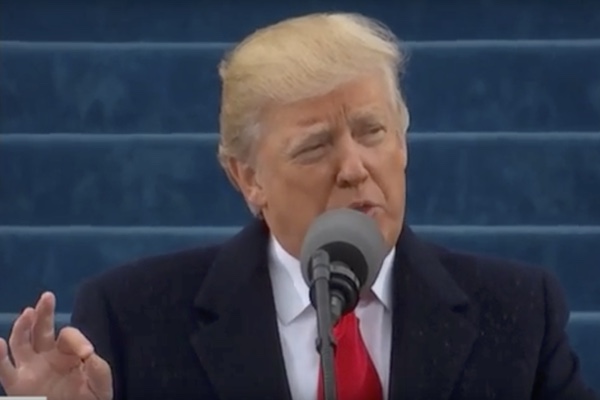 Four days before Inauguration Day 2017 Civil Rights hero and Georgia Congressman John Lewis questioned, in light of Russian hacks that seemed to hurt the candidacy of Hillary Clinton, the legitimacy of the Trump presidency.  As is his custom, Donald Trump responded via Twitter: “Congressman John Lewis should finally focus on the burning and crime infested inner-cities of the U.S….”  It happened on the day before America celebrated Martin Luther King Jr. Day.

As expected, this exchange of words fueled the usual partisan politics in Washington.  Some thought Lewis was out of line to say that Trump was not a legitimate president.  Others were appalled that Trump would respond in the way he did to a living legend who almost gave his life in the Civil Rights Movement.

Washington Post columnist Michael Gerson tried to steer a middle course in the debate, but in the process he put his finger on a serious problem with the Trump presidency.  Trump’s response to Lewis, Gerson wrote, suggested that he “seems to have no feel for, no interest in, the American history he is about to enter.”  Gerson added, “He will lead a nation that accommodated a cruel exception to its founding creed; that bled and nearly died to recover it’s ideals; and that was only redeemed by the courage and moral clarity of the very people it had oppressed.”

Gerson is right about Trump’s failure to understand his presidency as part of a larger American story.   His inaugural address only reinforced this point. Trump made no attempt to situate his vision for the nation in a shared past.  In this sense he echoed the revolutionary Thomas Paine who told the British-American colonists in 1776 that “we have it in our power to begin the world over again.”

Paine was writing at the beginning of the nation.  Trump, on the other hand, stood before the country on Friday with 240 years of history behind him.  Instead of recognizing that history, he told the people of the United States to rise above the “carnage” and follow him to greatness.  As Trump said on the campaign trail, “I alone can fix it.  I will restore law and order.”

Presidential inaugurations, especially modern ones, are often about looking backward in order to move forward.  New presidents place situate themselves in American history.  They build off the past in order to advance the American experiment.

For example, the last three American Presidents—Bill Clinton, George W. Bush, and Barack Obama—all made multiple references to the Founding Fathers in their inauguration addresses.

Bush said that he was “honored and humbled to stand here where so many of America’s leaders have come before me….”  He mentioned slavery, the Declaration of Independence, Jefferson, the Homestead Act, the Social Security Act, the G.I. Bill of Rights, and the Liberty Bell.

All of these men understood their presidencies in the context of something much greater than themselves.  As historian Sam Wineburg has written, history relieves us of our narcissism because it “teaches us to go beyond our own image, to go beyond our brief life, and to go beyond the fleeting moment in human history into which we have been born.”

Trump made virtually no references in his speech to the American past and our shared traditions.  As Gerson noted, such a dismissal of history is a clear sign of a narcissistic personality.  The late Christopher Lasch, in his 1979 best-seller The Culture of Narcissism, defined a narcissist as someone who lacks “any real intellectual engagement with the world.”  The narcissist has “no interest in the future because, in part, he has so little interest in the past.”

When we see ourselves as part of a larger story, a common past, it can only lead to humility.  History forces us to come to grips with the fact that we are only a small part of the human experience as it unfolds through time.  Previous American Presidents understood this.  Donald Trump does not.