What Was It Like to Be a Jew in the Past? How a New Play, "If I Forget," Answers this Question. 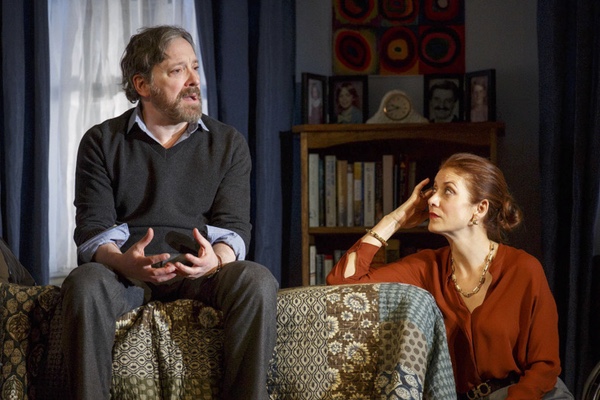 Lou Fischer, a Jew, one of the U.S. soldiers who liberated the Dachau concentration camp at the end of World War II, is very sick and needs round the clock care. He depends on his three grown children, living in New York suburbs, to take care of him but they are up to their necks in their own financial woes and do not have the money (they say). The three of them are also reeling from the awful reception that son Michael’s controversial new book on the Holocaust is receiving (Jews hate it). They ponder their fate while they watch the Camp David peace talks and civil unrest in the Middle East on television in 2000. And they fret.

They fret over their Dad, over the memory of their mom, who recently died, the troubles in their lives and, importantly, their Jewish heritage. What was it like to be a Jew in the past? In Israel? In America? Will the Jews survive in the Middle East? Has the U.S. forgotten the long and rich heritage of the Jews in Israel? The Jews in America?

All of this is explored in If I Forget, a poignant, powerful drama by Steven Levenson that explores the erosion of Jewish identity in America since World War II in the middle of a scorching family drama in which everybody threatens to tear everybody else to pieces.

The story, full of very funny dialogues and deep, finely etched characters, just opened at the Roundabout at Laura Pels Theatre, 111 W. 46th Street, New York. It is a wrenching family story and a nice look at a religion in which many of its members worry. And worry. And worry.

The play starts out simply enough. Son Michael, a professor up for tenure, has just published a book that urges Jews to forget the Holocaust. They should put it out of their minds and move on. The book inflames Jews everywhere and Michael has to fight for his academic life. He argues, in dialogues with his family, that the Jews are ruining themselves with endless chatter about the past and the Nazi persecution. They need to forget about it and plunge into the future. This sets off a chain of events that takes the play in a different direction, a family direction, and it is riveting.

Playwright Levenson then opens up the play and highlights the folks in it. There is in-trouble Michael and his non-confrontation wife Ellen. Off stage is their troubled college age daughter Abby, who is going to pieces psychologically in Jerusalem at the time. Then comes sister Holly, who talks incessantly and finds fault with everyone, especially her very rich and very quiet lawyer husband Howard and oddball teenage son Joey. Finally, there is Sharon, aged 39, a real whiner, who has fallen in love with a 51 year old married Guatemalan with four kids. That, she claims, is the future she always sought.

Each tries to get the others to pay for Dad’s care. The audience learns, though, that they all have financial problems, in addition to a lot of other troubles (or do they?), for remarkable, and I mean remarkable, reasons. Can they pay? Will they pay?

Levenson has written a rich and yet tortured family drama in which everybody pulls together, until it is no longer in their best interests to do so. Then they battle each other. They are, really, a family like all families, on an exaggerated scale. The playwright tells their stories in searing scenes, one stronger than the next. Their problems are happening at the same time, too. All of them are on a boat headed for a waterfall. Through it all, they turn to their Judaism for strength, as they always have and as the playwright reminds us have done so for thousands of yet. Yet as they do so we learn that they are not very good Jews at all.

The play tells a lot of solid history. The playwright explores the creation of Israel and its confrontation with the Arab world since 1947 and the constant struggles of Israel’s residents over those years. It explores similar problems the Jews have in America. The play deals with the Holocaust in several ways. There is a haunting scene in which Lou, 75, recalls the liberation of Dachau in 1945 and the carnage soldiers witnessed when they opened up the doors to buildings only to find hundreds of dead bodies piled on top of each other.

The play is nicely directed by Daniel Sullivan and is staged in a two story, revolving house with action on both levels. Sullivan gets strong individual performances from his actors – Jeremy Shamos as Michael, Tasha Lawrence as Ellen, Kate Walsh as Holly, Gary Wilmes as Howard, Seth Steinberg as Joey, Maria Dizzia as Sharon and Larry Bryggman as Lou.

If I Forget is a taut drama on two levels, history and family battling.

You will never forget If I Forget.

PRODUCTION: the play is produced by the Roundabout Theater Company. Sets: Derek McLane, Costumes: Jess Goldstein, Lighting: Kenneth Posner . The play is directed by Daniel Sullivan. It runs through April 30.