Did Donald Trump Win Because He Had a Better Slogan?

Donne Levy is a retired instructor in U.S., Asian, and European History. 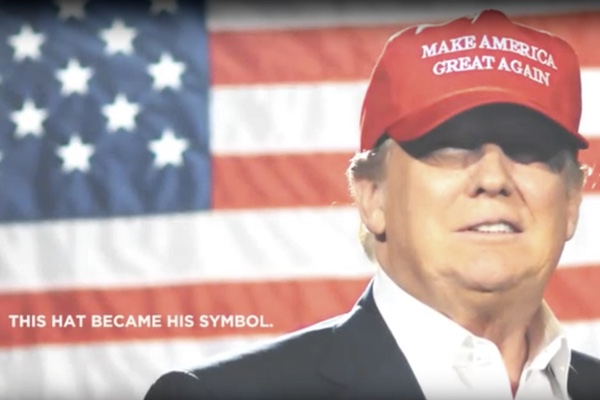 “Make America Great Again.” That is a presidential campaign slogan promoted by a winning candidate in 2016. Such slogans have been a part of American political culture since the first half of the Nineteenth Century. These campaign slogans tell us much about American political history and the priorities of the American people at the time of a presidential election. Furthermore these slogans are designed to convince voters that electing the party out of power will correct the defects of the past, thereby making the future better.

Using a slogan or pithy statement to win the presidency would have been completely alien to our Founding Fathers. Finding ways to lure masses of voters in one direction was something George Washington or John Adams would have considered inconceivable. Both men, like other Founding Fathers, had aristocratic tendencies. Moreover, the way presidential politics began with white male property owners choosing legislators who in turn chose electors, was not conducive to campaign sloganeering.

However, much changed by the Presidential Election of 1840. Gone was the property requirement for voting and voters choosing the electors directly through political parties arose making the presidential election process more democratic and dependent upon voters.

The transformation that turned presidential elections into popular campaigns began in earnest with the movement to elect the so-called common man Andrew Jackson president. However, the transformation did not come into full-flower until the 1840 election when the Whig Party devised the slogan and campaign song “Tippecanoe and Tyler Too”

Campaign slogans became an increasingly prominent part of presidential elections through the rest of the 19th century and on to the 21st century. We can see a progression of recent American history by examining campaign slogans.

The presidency of Jimmy Carter has been called the most pessimistic administration since Herbert Hoover’s. With inflation and interest rates in double digits, in addition to an energy crisis that caused soaring gasoline prices and dreadfully long lines at gas stations, Carter delivered a speech in July 1979 commonly known as the “malaise speech.” Carter never actually used the word “malaise” but his pollster Pat Cadell did when speaking to reporters before the speech. Cadell’s polls were indicating that Americans had become pessimistic about their future. The speech became an announcement of energy policies to deal with the crisis and a frank admission about America’s crisis of confidence. This aura of pessimism opened the White House door to the Republicans and Ronald Reagan.

Reagan in 1980 could easily use a campaign slogan framed in a question: “Are You Better Off Than You Were Four Years Ago?” Never mind that economic studies indicate that many Americans were better off, but no one felt that way. Reagan rode the slogan to the White House and four years later with inflation and interest rates down to single digits, Reagan could run on the slogan “It’s Morning Again in America.” That slogan befit the incessant smiler as Americans wanted to feel good about themselves.

In 1988, Vice President George H.W. Bush became the Republican presidential nominee and a new slogan was needed. “Re-Elect Reagan For a Third Term With a Vote for Bush” would not have worked as a campaign slogan. Despite Reagan’s popularity, a sharp edge appeared. Reagan’s 1981 Economic Recovery Act was a huge across the board tax cut, but the wealthy took great advantage while funding was cut for social programs involving the poor, elderly, and children. It was Reagan who chose to label ketchup a vegetable as a way to cut the school lunch program that goes to the children of poorer families.

To soften the hard edge, Bush and his advisors with the help of focus groups came up with “A Kinder Gentler Nation.” The idea was to tell the American people that Bush would follow Reagan’s popular low-tax policies, while being more humane toward the truly needy. The Bush campaign was vague about how to do that, but it worked. Bush won 40 states in 1988.

By 1992 much had changed. The real estate boom was over and by mid-1991 the economy had slowed enough to meet the definition of recession. In June 1992 the unemployment rate was at 7.8 percent and much higher in some key states. California unemployment was over 9 percent with some counties suffering from double-digit joblessness. Bush, who grew up in one of America’s privileged families, seemed out of touch with the American people.

This time the Democrats were in position to take advantage. The Bill Clinton campaign released a pamphlet titled “Putting People First” and that became a campaign slogan In the Spring of 1992 polls showed Clinton in third place behind Bush and the quirky third-party candidate, Ross Perot. But, Clinton, emphasizing a presidency that would put people first, soared to first place.

With the return of prosperity Clinton easily won re-election with the slogan “Building a Bridge to the Millennium.” Then came 2000 when a younger Bush and the Republicans were told by their focus groups that a slogan similar to the 1988 campaign would work nostalgia magic for the pre-Clinton 1980s. That gave birth to “Compassionate Conservatism.” Basically that meant going back to low taxes, but with a strong safety net of Social Security, Medicare, and social programs. Despite continued prosperity, it worked enough to barely win Bush victory in the Electoral College. In the wake of 9/11, Bush narrowly won re-election in 2004 with “Safer World and a Better America.”

In 2008, Barack Obama sensed a hunger for change. Demographic change had made it possible to win if a candidate could generate a huge turnout of Latinos, African-Americans, and women who viewed Republicans as the party that stood against equality. The candidate who could do that was an African-American with the slogan “Change You Can Believe In.” That slogan did not specifically address the rise of ethnic or racial minorities, but with Obama at the head of the national ticket this was the effect. Coupled with the economic collapse in September 2008, Obama had no trouble winning. By 2012 with the recession being reversed, the single word slogan “Forward” was enough to win re-election.

Although the Great Recession was clearly over by 2016 many Americans remained fearful. Large areas in midwestern states were still suffering from economic change and people looked for someone to blame. Too many illegal immigrants were in America and some thought they were competing for American jobs. Government leaders let jobs go abroad. Too many terrorist attacks were being committed abroad by Muslims and they were coming into the country. Many felt America was not the country it once was. Conditions were ripe for Donald Trump and the slogan “Make America Great Again.”

This slogan is extreme in that it implies that all was wrong or substandard previously. It gave rise to the assertion that African-Americans live in horrible conditions. We can’t trust Mexicans or Muslims because they harm American greatness. Our leaders in Washington harm our greatness because they are the ones who gave the jobs away. This means that Washington is little more than a swamp and that gave birth to a secondary campaign slogan “Drain the Swamp”

We should be cautious in assessing the extent to which the “Make America Great Again” slogan succeeded in capturing American people. It won over enough people fearful of the future in certain geographic regions to win the Electoral College. But Hillary Clinton won 2.8 million more popular votes.

It remains to be seen whether the mixed election results will have an impact on Trump. So far it has not. His executive orders and policies regarding Muslims and undocumented residents are in line with his campaign slogan. So too is his rhetoric. For example, in his speech to Congress, Trump pointed to horrendous employment figures stating that 94 million people are out of the workforce. He neglected to state that 88 million of those don’t want jobs because they are retirees, students, or disabled. That coincides with his slogan that implies that America is not great.

What can we learn from a history of successful presidential campaign slogans? These are snapshots in a presidential election year capturing the desires, aspirations, and sometimes fears of the American people. When an opposition party is trying to achieve power, the campaign often points out the weakness of the party in power and how that will be corrected if voters make right decisions. Increasingly presidential campaign slogans are indicative of the political parties operating more as followers than leaders. Polling, focus groups, and demographic studies have become the source of the slogans. That’s unfortunate.