Jefferson Vs. Trump: How Their Two Inaugurations Differed

John Boles is the William P. Hobby Professor of History at Rice University and the former editor of the Journal of Southern History. His latest book is Jefferson: Architect of American Liberty (Basic Books, 2017). 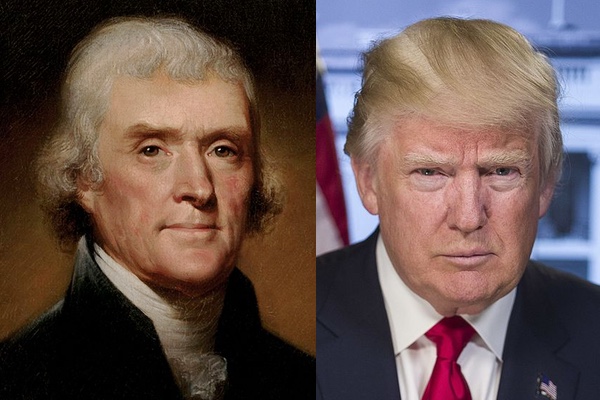 What a difference two centuries makes! Thomas Jefferson was inaugurated on March 4, 1801, 216 years ago, after an unusually bitter election campaign in which he had been portrayed as a radical French Jacobin opposed to the American system of government and an atheist as well who would destroy religion, while his chief opponent, Federalist John Adams, had been portrayed as an elitist who sought to impose British-like monarchical government. To make matters worse, Adams had been bitterly opposed by a faction within his own party. Because the Constitution did not yet allow political parties to run electoral tickets, Jefferson ended up tied with Aaron Burr with the most number of electoral votes. But some Federalists plotted to deprive Jefferson of victory and hoped to have the House of Representatives chose the unprincipled Burr, who they thought they could manipulate. After thirty-seven tie votes in the House, and in part because Alexander Hamilton had thrown his support to Jefferson, the Virginian was chosen as president on February 17, hardly more than two weeks before the March 4 inauguration. 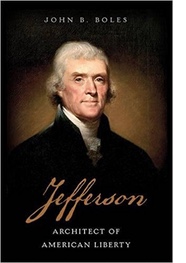 There was no transition team, barely time to chose cabinet members, and Jefferson had to hurriedly write his inaugural address. He understood that his most important task was to cool the partisan anger and restore harmony to the nation. He betrayed no hint of us against them. Jefferson also wanted to model anti-monarchical leadership and lay out a positive vision for the future, all the while treating the political opposition with a generosity of spirit that removed any fears of his radicalism or irreligion. He did this in a brief but elegant inaugural address that both summarized his ideals of governance and suggested his style of leadership.

Intentionally downgrading the kingly pomp of the previous inaugurations, in this, the first to be held in Washington, D.C., Jefferson chose to walk from his boarding house to the capitol building, wearing relatively plain clothes and without an elaborate parade. The inauguration itself took place in the Senate chamber, and no member of his family was present—nor was the previous president and losing candidate, John Adams. After the oath was administered, Jefferson, who had a weak voice, proceeded to read his address in so low a tone that few could hear him, but he had arranged for it to be printed and distributed after the ceremony. There were no crowds, no parade to the president’s mansion (not yet called the White House), no fancy balls that evening, none of the spectacle of today’s event.

Jefferson—whose background included being a legislator in Colonial Virginia and then the new state, governor of Virginia, a member of the Articles of Confederation Congress, then U. S. minister to France, only to be appointed by George Washington as the first Secretary of State, and several years later serving as vice president during Adams’s administration—began on a note of humility, declaring that the presidential job was “above my talents.” He stated that he found comfort in the expertise and wisdom of others in the government, including the Congress. With their combined support he expected to be able to “steer with safety the vessel in which we are all embarked amidst the conflicting elements of a troubled world.” Then to his first priority, defusing the political animosities. He stated that all would remember that the will of majority would “prevail,” but that “will to be rightful must be reasonable”; the winners must recognize that the “minority possess their equal rights . . . [which] to violate would be oppression.” He emphasized that “every difference of opinion is not a difference of principle,” pointing out that between the two parties there were different emphases on the relative importance of the executive branch and the legislative branch, in the central government and the state governments.

Having already optimistically portrayed the nation—he mentioned “the honor, the happiness, and the hopes of this beloved country”—whose commerce was thriving, whose values were strong, whose prospects both moral and economic were rising, he went on to spell out his central political views concisely and persuasively. He praised “a wise and frugal Government, which shall restrain men from injuring one another, shall leave them otherwise free to regulate their own pursuits of industry and improvement. . . .” Jefferson upheld “equal and exact justice to all men, of whatever state or persuasion, religious or political. . . ; peace, commerce, and honest friendship with all nations . . . ,” indeed, the whole panoply of principles associated with Jeffersonian democracy.

Here as elsewhere Jefferson seemed uncannily modern; he was a strong proponent of free trade, for example, and by religious freedom he included the Muslim and Hindu faiths. (Though in his traditional attitudes toward women he showed himself very much a man of his times; similarly, while he genuinely believed slavery wrong, for complicated reasons he never saw a way to free all his own slaves.) The even-tempered Jefferson attacked no one in his inaugural address, neither explicitly or implicitly, not even his political foes; he did not describe the state of the nation he had just become the leader of in harsh, lurid terms; he did not seek to exacerbate tensions between groups; he did not suggest that only he possessed the skills to deliver the nation from its various problems and transform its prospects: it already was “the world’s best hope.” He chose an able cabinet team and consulted with them closely. His tone was neither angry nor, to his opponents, scary. Jefferson proceeded to govern moderately. He did not try to dismantle every aspect of Hamiltonian economics, he did not try to force all existing officeholders from their position.

He believed that by governing with moderation, by laying out a series of ideals, by appealing to the people’s best instincts, he could gradually remake the nation to better fit his idea of constitutional democracy. In his conclusion Jefferson humbly requested “may that Infinite Power which rules the destines of the universe lead our councils to what is best, and give them a favorable issue for your peace and prosperity.” To the surprise of many, this scholarly, polite, gentle man proved to be an exceptional politician, one whose policy successes easily won him reelection in 1804 and established the party named after him in power for four more terms.

As much as we might wish, lessons are difficult to draw for today from Jefferson’s inauguration. By contrast, for example, President Trump raised $107 million to cover his inaugural events. The strength of the competing parties is now so much greater, the power of the media so extensive, the sheer size and diversity of the nation and its influence on the rest of the world so incomparably greater (the U.S. population in 1800 was only 5.3 million), that the events of 1801 may seem quaint and of only antiquarian interest. But humility, generosity, moderation, fairness, and respect for the foundational values of the nation never really go out of style. Inaugurations sometimes represent turning points in a nation’s history. They should always be occasions for national self-examination.