Review of Hugh Kennedy’s “Caliphate: The History of an Idea”

Daniel Lazare is the author of The Frozen Republic: How the Constitution is Paralyzing Democracy and other books. He writes regularly for Jacobin and Consortium News. 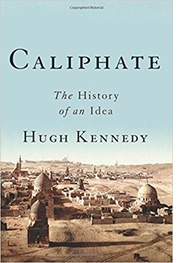 Somebody slapped the wrong title on Hugh Kennedy’s political history of Islam from Muhammad to the Ottomans. His book is about many things – about how rival factions battled for control in the new Arab empire of the 640s and 50s, about the glittering court culture they created, and about the anarchy that overtook the caliphate some two centuries later.  But it’s not a history of an idea for the simple reason that it has little to say about what was new about the caliphate or why it was different from all other empires.

“Caliph” means successor, deputy, or representative, and while the term now inspires fear and awe, originally it meant little more than a temporary stand-in. Thus, Kennedy tells us that the prophet would sometimes appoint a khalifa to look after his affairs while he was away on battle [Caliphate, pp. 1-2]. But this changed with Muhammad’s death in or around the year 632. (The date is only approximate.)[1] Once his followers had suppressed resistance inside Arabia, they turned their attention outward, driving the Byzantines out of the Levant and then humbling the mighty Sassanid empire in Iran. With that, the term acquired new heft.

But questions soon arose. If a caliph was just a deputy, then whom was he a deputy of – Muhammad or God himself?  How was a caliph to be chosen – by election, descent, or some different way altogether? What should his qualifications be, and what was he supposed to do once he took office?  Amass treasure and territory or concentrate on spreading the word of God?

Issues like these were not unique to Islam.  Charlemagne, who postdates Muhammad by less than two centuries, also conquered in the name of God.  But while he called himself “King of the Franks,” Muhammad’s followers refused to call themselves “King of the Arabs.”  Indeed, when the son of the Muslim conqueror of Spain donned a crown at his Visigothic wife’s behest, his troops were shocked. “He has gone Christian!” they supposedly exclaimed in indignation.[2] Why was kingship problematic in one society but not in another?

Similarly, where Charlemagne doled out newly-conquered possessions to his followers, the caliphs believed in centralized control.  Was it because they were greedy or because, as they insisted, they were holding it in safekeeping it for the umma, the community of the faithful?  Charlemagne regarded himself as a lawgiver in the style of Moses or the ancient Jewish king Josiah.  But the caliphs relinquished legislative authority beginning in the 830s when a hard-nosed mullah named Ibn Hanbal argued that such powers belonged exclusively to the religious scholars.  Unable to make law in their own right, caliphs found themselves reduced to the role of enforcers of law that others formulated, interpreted, and adjudicated.  Muhammad’s successors were marginalized by their own society.

The “Islamicate,” as the historian Marshall Hodgson called it,[3] thus veered off in a very different direction.  But while Kennedy, a professor at the School of Oriental and African Studies in London and the author of more than a dozen books about Muslim history, tells us what happened, he has much less to say about why.  He notes the accelerating cycles of internal violence that led to the assassination of the third caliph, Uthman, in 656 and then the death of the fourth, Ali, in 661 and suggests that it had something to do with the fact that “[t]he conquests had stalled and resources were under pressure and many of the Muslims felt excluded and impoverished while they observed others living in the lap of luxury” [18].  Yes, but this hardly describes the outrage of Muslim troops at irreligious upstarts whom they said had hijacked a divinely-sanctioned movement for their own purposes.

It also doesn’t explain why such bitterness has persisted through the ages. Charlemagne’s empire also devolved into civil war following his death in 814.  But today no one other than a handful of medieval specialists knows who the emperor’s grandsons were or why they went at one another so viciously.  The idea of followers of Pepin II or Louis the Pious battling it out in the streets of today’s Brussels would be ridiculous.  Yet Uthman and Ali’s successors, now known as Sunnis and Shi‘ites, continue to blast away at one another in the rubble of Syria and Iraq.

Why? Kennedy is an old-school historian who is more interested in the narrative than what it signifies. Hence, readers who look to Caliphate for an explanation are likely to be disappointed.