Was It Bad Luck or Climate Change?

Sam White, an Associate Professor in the Department of History at Ohio State University, is the author of the new book, A Cold Welcome: The Little Ice Age and Europe’s Encounter with North America (Harvard University Press, October 2017). 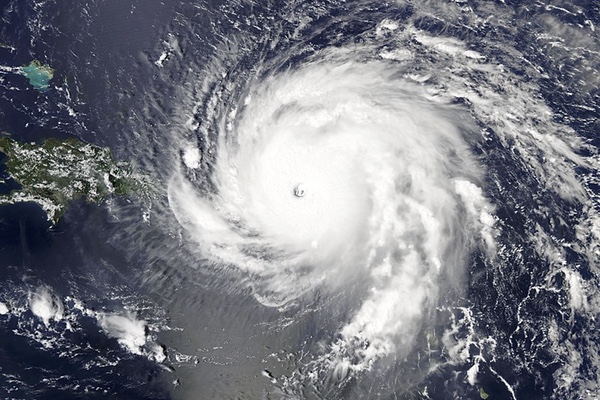 Hurricane Irma over the Virgin Islands at peak intensity on September 6, 2017 as the second most intense Atlantic hurricane on record in terms of sustained winds.

Last month, Hurricane Harvey dumped more rain on the Texas coast in a week than most states see all year. As I write, Florida is engulfed in a hurricane expected to cause tens of billions more in damage. We know rising sea levels mean higher storm surges. We know hotter air means potentially larger hurricanes with more rain and winds. What’s harder to say is whether we should blame these particular storms—or any other weather event—on global warming. This issue first came to the attention of most Americans in the wake of hurricanes Katrina and Rita, when the fate of New Orleans was in doubt. In a way, however, the question of bad luck versus climate change has been with us at least since the first Europeans arrived in America. And as it turns out, we’ve often gotten the answer wrong. 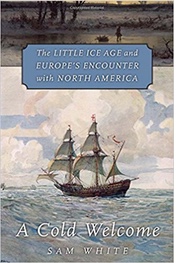 Climatically speaking, America has always been a land of variability and extremes. Early explorers and colonists arrived expecting climates in America to resemble those at the same latitudes in Europe, so that orange trees would grow in Maine and sugar and spices in Virginia. Instead they encountered America’s stronger continental seasons, with storms, frosts, and heat waves of a kind rarely felt in Western Europe.

Worse still, they arrived at the nadir of the so-called Little Ice Age. The mid-1500s to early 1600s—roughly the time from the Coronado expedition to the founding of colonies at Jamestown, Santa Fe, and Quebec—brought probably the fast cooling and lowest global temperatures of at least the past two millennia. Early colonial accounts include some remarkable extremes, including winters with heavy snows across the Gulf states, and when the James River froze halfway across at Jamestown and the Rio Grande all the way across around present-day Albuquerque. Much of today’s eastern US suffered exceptional droughts, and the Gulf of Mexico and Atlantic were unusually cold and stormy.

Re-examined with the help of new historical records, recent archaeology, and new techniques in climate reconstruction, much of early colonial history looks like a story of climate-related disasters. Jamestown’s infamous “starving time” during an extreme winter and unprecedented drought was only the best-known example. A sister colony in Maine gave up after a few months of severe cold in 1608. Early French colonies in New England and Canada suffered appalling rates of scurvy during the long winters. Things were no better in the South and Southwest. Officers in Hernando de Soto’s expedition wrote of “such great snows and cold we thought we were dead men.” The little-known conquistador Tristán de Luna brought a thousand colonists to Pensacola Bay in August 1559 and reported it was “the best port in the Indies.” Less than a month later, a hurricane smashed into the harbor, sinking nearly all his ships and supplies. In 1600, Juan de Oñate’s conquest of New Mexico nearly collapsed when drought and freezing weather brought conflict and hunger. Half his followers deserted, with one complaining that the climate was “eight months of winter and four of hell.” These climatic accidents changed the course of early colonial history.

Yet the issue for early colonists was not so much the climate or weather as the uncertainty. Extremes of the Little Ice Age only added to the real challenge, which was to figure out what to expect from the New World and to prepare accordingly. Every storm or extreme season in America raised the same questions: Was it just an anomaly, or something to be expected here from now on? Was it just bad luck, or a change of climate? Without the data or science to answer those questions, colonial plans were swayed by the exaggerated praise of promoters and despair of detractors. Good opportunities were abandoned for fear of worse to come, while other ventures ignored climatic realities and met disaster.

Modern progress in weather measurement and climate science should have helped Americans avoid those mistakes again, but often didn’t. Thomas Jefferson thought the mild years after the mid-1700s meant farming had improved America’s climate. (They hadn’t.) The cold decade of the 1810s raised apprehensions of global climatic disorder. Over the following century, Americans debated whether the West could grow plantation crops, whether it was all a great desert, and whether rain would “follow the plow.” (It didn’t) In our times, the reality of man-made global warming has been met with a mix of denial and apocalyptic fears rather than informed national policy. Optimism and anxiety, political prejudices and economic interests guided debates about climates then as now.

If present global warming continues to accelerate, we will soon enter a “no analog” situation, where past experience offers little guide to actual climates. In effect, we’re crossing into another new world, as far as climate goes. Our circumstances have changed a lot since early colonial times and the Little Ice Age. Unfortunately, our thinking about climate hasn’t changed enough. Too often, climate remains an abstraction onto which Americans project their hopes and fears. At least now we have solid climate science and climate models as well as history to help guide us, if only we choose to use them.