When Herbert Hoover Ended the Great Depression. (No, I’m Not Kidding)

Kenneth Whyte is the author of The Uncrowned King: The Sensational Rise of William Randolph Hearst, a Washington Post and Toronto Globe and Mail Book of the Year, and a nominee for four major Canadian book awards. He is a publishing and telecommunications executive and chairman of the Donner Canada Foundation. His latest book is Hoover: An Extraordinary Life in Extraordinary Times (Knopf, 2017). 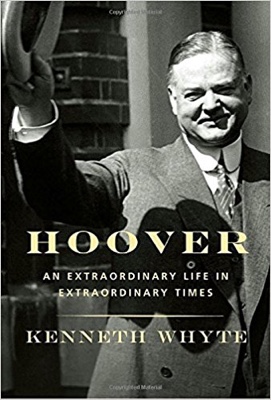 No one has ever taken seriously Herbert Hoover’s claim that he broke the Great Depression in the summer of 1932, not least because the Great Depression ran another seven years before dissolving into the Second World War. It is also well known that the economy was hit by a severe banking crisis in the winter of 1932-33 and that the Depression reached its nadir in the last hours of Hoover’s term of office, which expired on March 4, 1933. It would seem that Hoover had to be either dishonest or delusional to claim any manner of recovery before he was emphatically dumped by the American electorate. But let’s review the evidence, just for the sport of it.

In June, 1932, on the eve of the national party conventions, things looked much as one would expect of the worst economic calamity in U.S. history. There had been an epidemic of bank failures in the first half of the year. Gross National Product was at $60 billion, down from $75 billion a year before, and a peak of $105 billion in 1929. Unemployment, by later estimates, was over 20%. The Dow Jones Industrial Average hit 41.2 that month, a sickening slide from its peak of 381.2. The federal deficit for the fiscal year was 43.3% on spending of $4.7 billion.

On the bright side, Hoover’s Republican administration had managed since his state of the union address the previous December to strike deals with a Democratic Congress and a nominally Republican Senate to balance the federal budget, make capital available to farmers and home builders at low rates, release money stuck in closed banks, and create the Reconstruction Finance Corporation, a multipurpose agency that would lend to a broad range of challenged financial institutions and expand the capital stock of the financial system.

These measures worked. By October, virtually every important economic indicator in the U.S. was on a positive track. The outflow of gold from the United States was dramatically reversed. Industrial production had arrested its three-year slide and improved by 15% in the third quarter. Three year slumps in production of consumer goods, production of durable goods, and production of machinery, of capital expenditures for plant and equipment, of the general price index, of the wholesale price index, and of employment, had all been broken and turned around.

There is more evidence of recovery. The Dow Jones Industrial Average had shot from its June low to 71.6 point in August, an astounding 67% gain. Real gross national product, which had declined an average of 9.3 percent annually in the years 1929-31, fell a mere 1.3% in the whole of 1932, and was likely flat or better in the second half of the year. At the time a more finely calculated metric than GNP was industrial production, and it would never again reach its lows of July, 1932. Nor would the Dow repeat its bottom of June, 1932.

After three years of backbreaking work, Hoover had stopped the Depression in its tracks and by most relevant measures forced its slight retreat. It is on this evidence that he based his claim to have fixed the Depression. He was not alone in this impression. A scientifically valid poll taken in the last days of the 1932 campaign found that slightly less than two thirds of Americans believed “business in general is picking up.”

Franklin Delano Roosevelt was elected on November 8, 1932 but would not take office for four months (the last of the long interregnums). The accepted narrative of what happened during the interim is that another banking crisis landed because the administration had not actually fixed anything, that Hoover failed to act in the face of this fresh disaster, that most economic indicators turned down again and unemployment shot back up, and that Roosevelt was left to pick up the pieces of America’s shattered economy in March, 1933 which he did to his everlasting glory and his predecessor’s everlasting shame. This is where it gets tricky.

As the economist James Butkiewicz has demonstrated, Hoover’s Reconstruction Finance Corporation was working its recovery magic until September, 1932 when Democratic congressmen, determined to embarrass his administration and the banking sector, started publicizing the names of recipient banks, outing them as weak, scaring away their customers, and discouraging other banks from using its funds. By October, industrial production lost momentum and began to fall again.

On top of this, asBarry Eichengreen recently wrote in Hall of Mirrors, investors were worried in the wake of the election that Roosevelt, who had been busily meeting with gold skeptics, would abandon the gold standard. They began exchanging U.S. dollars for specie, reducing the federal reserve’s gold stock and further undermining the stability of the financial sector. It was these two primary factors, the sabotage of the RFC and uncertainty over gold, the first conjured by a Democratic Congress and the latter by FDR, that produced the new banking crisis.

As for Hoover’s actions, he pushed Democratic congressional leaders and the incoming administration for action. He wanted RFC loans to be kept confidential. He asked for bankruptcy legislation to prevent foreclosures and for new banking regulations, including measures to protect depositors. He wanted to extend federal regulations to banks operating on an interstate basis, and to separate investment banking from commercial banking, among other measures. He was frustrated at every turn by Democratic Congressional leaders taking cues from the president-elect, a part of the story that has been entirely forgotten.

While pretending to stay out of Hoover’s way, Roosevelt, reported the New York Times, was calling the shots in Congress, “more and more assuming, in a political sense, the domestic section of the burden which will be officially his on March 4.” Said John Nance Garner, Democratic Speaker of the House and incoming vice president, “it is a waste of time to try any legislation to which [FDR] will not agree.”

On February 5, Congress took its obstructionism a radical step further by closing shop with twenty-three days left in its session. Virtually all work was put off until the incoming administration was in a position to introduce its own sweeping recovery program. Roosevelt wanted a free hand to implement his as yet unannounced plans for dealing with the crisis.

Still refusing to go down without a fight, Hoover wrote Roosevelt begging his assistance with Congress and asking him to commit to balancing the budget, to promise that there would be no tampering with the currency, and to cease publication of RFC business. The letter was hand-delivered to the President-elect by a secret service agent. Roosevelt deliberately left it unanswered for eleven days by which time more than thirty states had closed their banks.

Hoover also made a surprise visit to Congress on February 20 and delivered a special message repeating his requests only to be told by Democratic leaders that he was too late. He again tried direct appeals to Congressional leaders to have the publication of RFC loans discontinued and briefly gained the crucial support of Senate minority leader Joseph Robinson (Dem.) until he, too, decided to stand down and await Roosevelt.

FDR partisans have long claimed that their man was justified in his stance. He smelled a rat in the President’s machinations and it later came out in private correspondence that Hoover had hoped to scare Roosevelt into collaborating with him and, by so doing, renounce New Deal promises of change and experimentation. But while Hoover was condescending to his successor and would have been delighted to see him foreclose some of his options, he had asked nothing of Roosevelt in his letter or in his message to Congress that FDR and the Democratic platform had not promised during the campaign, with the exception of keeping RFC loans confidential. (The new administration would halt the publicity of RFC loans immediately upon taking office.)

New Deal insider Raymond Moley said that Roosevelt either “did not realize how serious the situation was” during the interregnum or “preferred to have conditions deteriorate and gain for himself the entire credit for the rescue operation.” The latter is the more likely explanation. Bernard Baruch and Carter Glass, two of the Democratic Party’s most respected voices, together with the Federal Reserve Advisory Board, echoed Hoover’s requests of the president-elect, and with the same sense of urgency. Roosevelt, in choosing to ignore them, was acting on his stated belief that “the goad of fear and suffering” facilitated his “progressive purpose.” A devastated economy, along with any credit he would receive for an upturn, would bring Roosevelt the political capital he needed for the legislative onslaught he had in mind for his first hundred days.

Sworn in on March 4, 1933, Roosevelt enacted many of the legislative initiatives that Hoover had urged upon him. From that moment until the Depression ended seven years later, he received all credit for every sign of economic improvement in the United States, while every shantytown that sprang up over that same period was called a Hooverville.

Of course, none of this changes the fact that the Great Depression began on Hoover’s watch and did a great deal of damage during his term. Nor does it deny that Roosevelt took measures that Hoover would not have attempted, or that FDR was in office when the fight against the Depression finally ended. In those crude terms, the old narrative can stand for people who insist on overstating presidential agency in economic matters. But perhaps Hoover can be forgiven for having insisted over the remaining three decades of his life that he had rescued a drowning economy only to have Roosevelt and the Democrats kick it off the dock.