What Do Nixon, Reagan and Trump Have in Common? 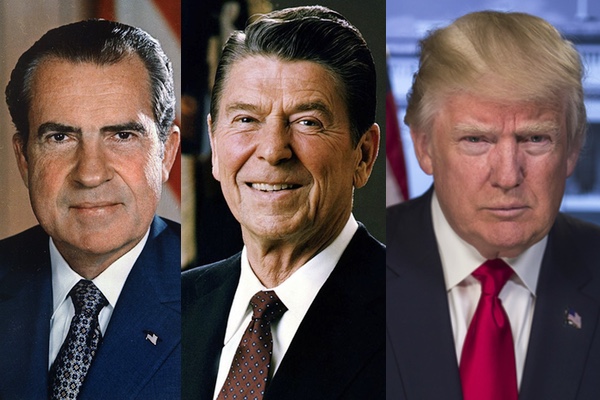 All three came to power after their campaigns resorted to reprehensible tactics.

As the investigation into the Russian collusion in the 2016 Presidential campaign by Special Counsel Robert Mueller moves forward at an accelerated pace, it is becoming clear that we can now declare that three Republican Presidents in the past half century won their elections with the assistance of contact with foreign nations which helped to affect the result. Therefore, corruption and deceit were endemic.

Richard Nixon in 1968 was able to convince South Vietnamese President Nguyen Van Thieu at the end of October to refuse to participate in peace talks in Paris, which President Lyndon B. Johnson had promoted with North Vietnam and the Viet Cong guerrillas. This intervention, which Johnson considered treason, helped Nixon to slow the surge of support that Vice President Hubert H. Humphrey, the Democratic nominee, had gained in the last two weeks leading up to Election Day. If this had been revealed at the time by President Johnson, it might have changed the result of a very close election, but Johnson chose not to do so, and it transformed history in a major fashion, as the Vietnam War continued for another six years until 1975. Richard Nixon’s “secret” plans were nonexistent.

Ronald Reagan in 1980 had emissaries who secretly made contact with Iran’s revolutionary government of Ayatollah Khomeini, which was holding 52 Americans hostage since November 4, 1979, at the US Embassy in Teheran. President Jimmy Carter, running for reelection, was dogged by the stalemate in releasing the hostages, which reached a full year by Election Day, and the Reagan emissaries arranged for the hostages to be freed, only upon the hour of the inauguration of Reagan on January 20, 1981, therefore destroying any chance that Carter could claim the credit. It is now well known that there were Reagan loyalists who had managed, behind the scenes, to help affect the election result by use of “dirty tricks,” swaying public opinion in a dishonest manner. And of course, later we had the Iran Contra Affair, a major scandal in the Reagan Presidency.

Now, we have Donald Trump, who manipulated public opinion on the issue of Hillary Clinton’s private email server (it has been revealed that top Trump administration figures, including his daughter, son in law, and others, also used private email servers while serving in the government, though no evidence has surfaced suggesting they used personal email to communicate confidential information).

But there is much more than that which has been revealed. We now know, despite vehement denials by President Trump and Press Secretary Sarah Huckabee Sanders and others, that there were all kinds of contacts and involvement between the Trump campaign and administration figures and Russian agents. The leading news media sources, derided as fake media by Trump, including the New York Times, Washington Post, Los Angeles Times, Wall Street Journal, and CNN, have provided evidence of Russian interference in the election. This includes the purchase of advertising and promotion of “fake news” by Russian operatives on Facebook; and growing evidence of hacking in 21 states, including those which decided the narrow victory of Donald Trump last November. This brings into question whether the awarding of the electoral votes in crucial states was legitimate, and therefore, whether Donald Trump actually won the Electoral College majority in a moral and ethical fashion. Whether the Trump campaign is guilty of a crime for allegedly colluding with Russia is under investigation by Robert Mueller.

On top of this sad and disturbing tale of manipulation by the Republican Party in presidential elections since 1968, is that questions still remain about George W. Bush’s victory in 2000 over Vice President Al Gore. The Republican majority Supreme Court decision awarding Bush the Florida electoral vote at a time when the Sunshine State was under the control of his brother Jeb only contributes to the sense that we might have had four corrupt elections, all of which benefited the Republican Party over the opposition Democrats in the past half century.

Can we ever trust in the future that we will have a fair and honest national election for the Presidency? Or will history repeat itself?

KEVIN PHILLIPS, AMERICAN DYNASTY: ARISTOCRACY, FORTUNE, AND THE POLITICS OF DECEIT IN THE HOUSE OF BUSH (PENGUIN PUBLISHERS, 2004)

JEFFREY TOOBIN, TOO CLOSE TO CALL: THE THIRTY-SIX DAY BATTLE TO DECIDE THE 2000 ELECTION (RANDOM HOUSE, 2001)