Dr. Joe Renouard teaches history and diplomacy at the Johns Hopkins University School of Advanced International Studies (SAIS) in Nanjing, China. His latest book is Human Rights in American Foreign Policy: From the 1960s to the Soviet Collapse (Penn Press). His recent work has also appeared in The National Interest, The Diplomat, The Los Angeles Times, and American Diplomacy. He has taught at Emory University, Oxford College, Virginia Tech, Kennesaw State University, and The Citadel. 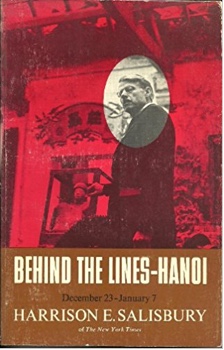 Fifty years ago, the Pulitzer Prize-winning New York Times reporter Harrison E. Salisbury published Behind the Lines – Hanoi, a detailed account of his experiences as the first American journalist allowed into North Vietnam in the late 1960s. It was a groundbreaking and controversial work. His candid criticisms of the American bombing campaign touched off a public debate over military tactics and the morality of America’s Vietnam War effort. They also elicited harsh reactions from the Lyndon B. Johnson administration, the Pentagon, and even from within Salisbury’s own profession as he joined the ranks of early dissenters against Johnson’s Vietnam strategy. Yet although the criticism tarnished Salisbury’s reputation in the short term, his most provocative claims would stand the test of time. 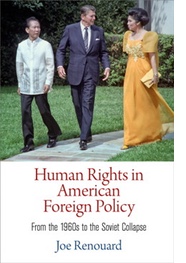 Salisbury was firmly positioned in the top tier of American journalists long before his trip to North Vietnam in the opening days of 1967. He had won his Pulitzer for international reporting in 1955 after five years as the Times Moscow bureau chief—his dispatches having done much to demystify life in the Soviet Union—and in the meantime he had served as a correspondent in Eastern Europe and a beat reporter in New York. A prolific writer and editor, Salisbury would go on to author twenty-nine books in his storied career, perhaps none more divisive than Behind the Lines.

Although a handful of antiwar activists and a few reporters from other nations had visited North Vietnam before Salisbury, it remained an isolated and mysterious place. As Senator J. William Fulbright noted early in 1967, “There has probably never been a war in which we knew so little about the people with whom and against whom we are fighting.”

By contrast, there was little mystery about the Johnson administration’s principal goal of maintaining a viable, independent South Vietnam. In military terms, this objective entailed providing the Sài Gòn government with aid, weapons, training, air support, and ultimately American ground troops in an effort to crush the southern guerrilla insurgency. Meanwhile, the U.S. would bomb military targets in the North to prevent the resupply of the guerrillas and, American strategists hoped, drive the Hà Nội leadership to quit the fight. The bombing also had clear psychological goals: it would demonstrate that the U.S. could destroy Hà Nội if necessary, and it would boost South Vietnamese morale by proving the seriousness of the American effort.

Salisbury’s reports challenged the administration’s claims on three fronts. First, he showed that American bombs had hit many non-military targets in Hà Nội, the nearby city of Nam Định, and the town of Phủ Lý. “Contrary to the impression given by United States communiqués,” he wrote in his first Times dispatch, “on-the-spot inspection indicates that American bombing has been inflicting considerable civilian casualties in Hà Nội and its environs for some time past.” Phủ Lý had been largely destroyed in U.S. bombing raids in 1966 despite its apparent lack of military significance. Indeed, there were few large targets in this agrarian landscape beyond bridges, oil storage, and small railroad depots, and most everything of value was distributed to inconspicuous farms and villages, not concentrated in one place.

Second, while the bombing did seem to be hindering the North’s war efforts, it was not stopping the transportation of goods and combatants to the South. Salisbury witnessed the nightly southward movement of men and matériel, as well as the ingenious adaptations of North Vietnamese civilians, who quickly repaired damaged roads and rail lines, erected makeshift pontoon bridges, and deployed “bicycle brigades” to carry heavy loads.

Third, far from breaking the people’s resolve, the bombing seemed to be strengthening North Vietnamese national unity and muting social divisions through a sense of common cause and collective suffering, much like London during the Blitz. “It is my feeling that the bombing has caused the country to acquire a spirit of national purpose or unity which it would not have otherwise,” Salisbury told a congressional committee after his trip. “The people have a feeling of the mass participation in this war.” In short, although the bombing was aimed, in part, at strengthening the morale of America’s ally in Sài Gòn, it was having an unintended parallel effect in the North.

Salisbury’s image of the undaunted North Vietnamese was ahead of its time, and would become deeply embedded in the popular memory of the war. He found an overwhelming sense of confidence at all levels of North Vietnamese society. “From our point of view,” Premier Phạm Văn Đồng told him, “it is a sacred war for independence, freedom, life. It stands for everything, this war, for this generation and for future generations. That’s why we are determined to fight this war and win this war. Our victory stems from this very resoluteness.”

A group of teenaged soldiers similarly gave Salisbury the impression that the bombing had only amplified their will to fight. “The youngsters did not take seriously the possibility of defeat,” the writer concluded. “They simply took it for granted that they would win.” And nearly every civilian he met told him that the people were prepared to fight for ten or twenty years to achieve victory. At first, he thought that they had been compelled to say these things, but no amount of coaching could have occasioned so consistent a line across such a wide social spectrum, from simple peasants and Buddhist monks to Catholic priests. “I began to realize that this was a national psychology,” he wrote in Behind the Lines. “No one had put them up to this. This was their way of talking and acting.”

Salisbury’s skepticism about the bombing was particularly jarring to his American audience. Seeing the damage firsthand, he wondered just how much the strategists and politicians really knew about the war’s effects on both Vietnamese civilians and the American flyers asked to carry out the missions. Had the military been frank in their presidential briefings, he asked, or were they sandbagging Johnson—highlighting the positives and overlooking a profoundly ambiguous set of facts on the ground? He even proposed that “their deep commitment to the theory of air power” may have driven them to overlook key elements of the national interest.

These were bold assertions in an America growing more divided with each passing day. As Stanley Karnow noted in his prize-winning Vietnam War history, “For a while in early 1967 it seemed that Salisbury had replaced Ho Chi Minh as the [Johnson] administration’s prime adversary.” The Pentagon and the White House accused the reporter of parroting enemy propaganda, of writing reports favorable to Hà Nội, and of citing dubious North Vietnamese casualty figures. Assistant Secretary of Defense Arthur Sylvester publicly chastised him, while Johnson administration insiders privately argued that the reports contained “exaggerations” and “lean heavily on North Vietnamese propaganda.” One Times reader wrote that Salisbury “is lending the tremendous prestige of your newspaper and his own byline to tell the other side’s story . . . he is condemning half of the war only—our half—leaving the Communist side untouched.”

Most painful to Salisbury were the broadsides from within the journalistic profession. ABC news anchor Howard K. Smith called his dispatches “careless, erratic and misleading.” A Time magazine author suggested that Hà Nội had given the reporter a Potemkin village tour to reinforce “the widely held impression that the U.S. is a big powerful nation viciously bombing a small, defenseless country into oblivion.” In a politicized vote, the Pulitzer committee decided not to recognize Salisbury’s trailblazing work.

Salisbury also had his defenders. Senator William Proxmire of Wisconsin—an early critic of the American bombing strategy—called his reports “a very serious statement by a highly respected reporter.” A Times reader argued, “If the American people are truly unreceptive to Washington and quick to believe Mr. Salisbury, this is because the administration’s consistent lack of candor has created a public attitude of deep suspicion.” USIA surveys of world press opinion found that while Salisbury’s reports fueled criticism of the American war effort, they also elicited high praise for the nation’s press freedoms. “American democracy is not a mere word,” concluded the editors of France Soir.

In truth, Salisbury had left some stones unturned. He erroneously reported that Nam Định had no military targets. He did not explore the North’s role in continuing the war through its aid of southern guerrillas, nor did he probe the extent to which the North’s defenses stymied American “precision bombing” efforts. Some of his long-term projections also proved wrong, including his belief that President Johnson could pursue a “guns and butter” strategy of continuing the war while funding the Great Society.

Yet the essentials of Salisbury’s thesis were vindicated in the long run. The State Department privately concluded that his reports could not “be dismissed out of hand,” and intelligence agents secretly confirmed his suggestion that bombing alone would not compel the North to capitulate. In the words of a 1967 CIA report, “27 months of bombing of North Vietnam have had remarkably little effect on Hà Nội’s overall strategy in prosecuting the war, on its confident view of long-term Communist prospects and on its political tactics regarding negotiations.” The Pentagon Papers would later reveal that the Johnson administration was divided over the air war strategy. By the time of Salisbury’s Hà Nội trip, Defense Secretary Robert McNamara had already rejected the theory that bombing would bring victory, yet administration officials seemed unable to chart a viable alternative course.

Reading Behind the Lines today, one is struck by Salisbury’s vivid descriptions of life in a wartime capital. Fully one-third of Hà Nội’s 600,000 residents had fled to the countryside, and those who remained enjoyed few modern comforts. The danger from the skies had given the city an “atmosphere of grimness and foreboding,” he wrote; it was “small, shabby, and incredibly run down after more than 20 years of almost continuous warfare.” North Vietnamese officials were so convinced that Hà Nội and the port of Hải Phòng would be destroyed that they drafted elaborate plans to construct a new capital elsewhere.

But even amid the anxiety and the shortages, the city’s hardy residents carved out space for entertainment, family life, and comforting social routines. Anyone familiar with today’s bustling Hà Nội will find much that is familiar in Salisbury’s 1967 description of Hoàn Kiếm Lake and the city’s Old Quarter: “There were beer parlors and bars which began to fill up in the late afternoon and which were jammed by 6 p.m., with hundreds of bicycles parked outside. There were many small restaurants. And around the lovely little lakes which form islands of greenery in the midst of the city there were still waterside cafés. Young people strolled through the parks along the lake fronts and idled away the late afternoon.”

It is this love for life that links the austere Hà Nội of Salisbury’s experience with today’s vibrant, modern metropolis of 7.5 million people, as can be gleaned from the picture below. Now the capital of a proud, dynamic nation, Hà Nội has opened itself to the world, and its people now welcome Americans with open arms.