Paola Bertucci is associate professor of history at Yale University. She has published extensively on the public culture of science in eighteenth-century Europe, and is the author of prize-winning essays on secrecy, selective visibility, and industrial travel in the Enlightenment. Her latest book is Artisanal Enlightenment: Science and the Mechanical Arts in Old Regime France. 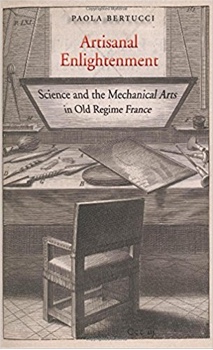 The Greek philosopher Plato tells in his Theaetetus that the astronomer and early philosopher Thales was looking at the sky on a starry night, when he stumbled and fell into a pit. A Thracian servant girl, who had observed the scene, was amused by the fact that Thales was so eager to know the things above that he could not see what was at his very feet, and so she laughed. Was her laughter a sign of scornful ignorance, motivated by her inability to understand the philosopher’s need for higher learning? Or was it a witty challenge to the philosopher’s quest for abstract theory?

Since the times of Plato, the story of Thales and the Thracian servant has been revived many times to emphasize the value of theory. Plato himself used the anecdote to highlight the features that distinguish the philosopher, represented by Thales, from other people, represented by the Thracian servant. In his interpretation, the material world gets in the way of sophisticated thinking, while it constitutes the limited domain within which ordinary people operate. In this opposition between the higher world of theory and the lower world of practice, the philosopher goes on to create knowledge by means of words, whereas the Thracian servant can only laugh.

Several centuries later, Diderot and D’Alembert built their encyclopedic project on the same dichotomy between the wordy savant and the unarticulated practitioner. They characterized their visits to artisans’ workshops as fundamental fieldwork for their encyclopedic projects. In his Encyclopédie article “Art,” Diderot emphasized the linguistic difficulties he encountered while writing about the arts and crafts, and urged the creation of a dictionary of the terms of the arts. Artisans, he explained, were extremely imprecise when it came to verbalize their practice. They were so accustomed to their routines that they employed the same word to identify different tools, or different words to identify the same tool. In the Preliminary Discourse to the Encyclopédie, D’Alembert defined himself as a “midwife of the mind” (obstetrix animorum), who had put words in the artisans’ mouths and order in their practices. In the workshop, he memorably concluded, “it is the moment that speaks, not the artisan.”

Artisans, however, did speak. Or, rather, they wrote. Artisans used written words and images to describe their practices and to highlight their particular way of knowing even before the invention of the printing press. Printed or manuscript books on the arts written by artisans abounded at the time of the Encyclopédie. The very idea of a total work on the mechanical arts circulated among artisans. My new book, Artisanal Enlightenment, casts light on the writing activities of artistes in the several decades preceding the publication of the first volumes of the Encyclopédie.

Artistes were self-defined, learned artisans, who set themselves apart from theory-inclined savants and routine-bound craftsmen. I argue that their writings about the arts were normative, not simply descriptive. As such, they had political significance. At a time of colonial and imperial competition, the mechanical arts constituted a domain of human activity that acquired strategic relevance. The search for a reliable method for finding longitude at sea, for example, was a practical problem of momentous significance for the colonial and commercial pursuits of European states. Books about the mechanical arts set the standard of excellence to which other artisans ought to conform. Through their written works, artistes presented themselves as the useful experts that the state needed to advance its imperial pursuits. This was quite a claim in France, where artisans were ordinarily disregarded in decision-making processes concerning economic and technological matters.

Several times, while writing Artisanal Enlightenment, I felt I was hearing the irreverent laughter of the Thracian servant girl. By shifting the focus of my historical analysis away from philosophers, I show that artistes too thought of themselves as enlightened. They distinguished between practice and theory in order to challenge the philosophers’ aptness to serve the state.

In their challenge, there was a subtle, yet crucial reversal of the hierarchical relationship between practical and theoretical knowledge. France’s leadership in the international scene, they claimed, could only be achieved through new machines and technical devices. These would not result from the philosophers’ quest for abstract causes, but from the artistes’ intimate knowledge of materials and how to manipulate them. Like the Thracian servant girl, artistes kept their gaze down to earth, subtly challenging the usefulness of abstract theory. They redefined improvement and progress as practical endeavors linked to technological advances, which the state should entrust to learned practitioners such as themselves. This I call the “artisanal enlightenment.” Whether we like it or not, its legacy did not get lost.