When Mississippi Basketball Was Integrated. (Sort of.)

Luther Spoehr, a senior lecturer at Brown University, teaches a course on the History of Intercollegiate Athletics. 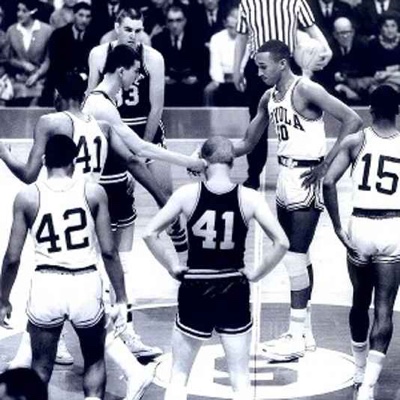 Loyola of Chicago’s Cinderella surge to the Final Four of the 2018 NCAA men’s basketball tournament has sparked memories of that school’s run to the national title in 1963, marked most notably by what came to be called the “Game of Change” against Mississippi State. A regional semi-final game played in East Lansing, Michigan, it pitted the Ramblers, with four black starters, against the all-white Bulldogs, and it began with Loyola captain Jerry Harkness shaking hands with Mississippi State’s Joe Dan Gold at the center court tipoff. The game then proceeded without incident.

Loyola’s ten-point victory was arguably as significant as Texas Western’s more famous victory, three years later, when the Miners started five African American players and defeated coach Adolph Rupp’s all-white Kentucky Wildcats. Loyola’s road to the title was not easy, even though they won their first-round game, against Tennessee Tech, by a record 69 points. In the final they needed overtime to defeat the University of Cincinnati Bearcats by two points. But, far more seriously, they had to deal with racial taunts and even death threats at each stop along the way. In many ways, the basketball games were the least of their worries.

Loyola’s historic run in 1963 is getting well-deserved attention again this spring. But a look at Mississippi State, their opponent in the “Game of Change,” is rewarding, too, because of the light it casts on how changing times altered white Southerners’ priorities, bit by bit, inch by inch, one or two or dozens or perhaps even hundreds of minds at a time.

America in 1963, prosperous and expansive, had been caught up in the civil rights movement for some time. Brown v. Board of Education was nine years in the past, but struggles over its implementation continued. Some Southern school districts had closed down rather than integrate. Sit-ins at lunch counters and other public facilities, begun by four black college students from North Carolina A&T in 1960, were happening all over the country, North and South; Freedom Rides and other protests proliferated. President John Kennedy, caught between his rhetorical commitment to civil rights and his desire for Southern conservative votes in Congress, tried to find policies that would thread the needle. In the fall of 1962, however, he was forced to take a stand and finally sent federal troops to ensure the enrollment of James Meredith at the University of Mississippi, thus integrating a bastion of segregation. The event was marked by rioting, in which two people were killed. Many white Southerners did want to yield: in January 1963, George Wallace became governor of Alabama and pledged, “Segregation now, segregation tomorrow, and segregation forever.”

Although Bob Dylan would not announce that “the times, they are a-changin’ ” for more than a year, the ground beneath segregationists’ feet was shifting rapidly. New priorities were emerging, and they gradually eclipsed the old racial one. They didn’t triumph overnight, nor were their achievement always celebrated or even acknowledged by those who pushed for them. But they were real nonetheless.

One instrument of change was white Southern businessmen. As the South began a transition from “Dixie” to the “Sun Belt,” they were sometimes painfully aware of the low regard in which the region was held—not merely for its backward race relations, but for the concomitant lack of economic development. Race riots like the one that greeted Meredith in Oxford, Mississippi, were, at the least, bad publicity, and worries about that publicity generated pushback against segregation that avoided addressing it directly but appealed to other values, such as the need to obey the rule of law. For instance, on the morning after the Oxford riot, with the possibility of another night of violence staring him in the face, well-known Oxford businessman Billy Mounger went on the air at his radio station and, as reported in William Doyle’s fine American Insurrection (1), spoke out to a broad public: “As a citizen of Mississippi, I apologize for not having spoken out. We adult leaders have failed our children. We have allowed them to be incited to the point where they themselves have caused violence and resisted the United States of America…. We are part of the United States of America, and we must obey the laws of the United States of America.” This was also the stance taken, more privately, by—of all people—Ross Barnett, Jr., son of Mississippi’s segregationist governor and a member of the National Guard: “I’m heading to the Armory. I’ve been federalized. I’m going to do my duty, “ he said.

Barnett, Jr., and Mounger’s actions in the fall of 1962 produced just a few of many cracks appearing in segregation’s façade. College sports provided the vehicle for many of them. Mississippi State’s basketball team had won the Southeastern Conference title in 1959, 1961, and 1962, but the state’s unwritten-but-inflexible policy prohibited playing in the NCAA tournament because they would play integrated teams. MSU won it again in 1963, and coach Babe McCarthy, on his radio program broadcast all over the state, appealed to be allowed to participate: “It makes me heart sick [sic] to think that these players … will have to put away their uniforms and not compete in the NCAA tournament…. This is all I can say, but I think everyone knows how I feel.” (2) Others could say and did more. MSU students staged a sit-in outside President Dean Colvard’s house, and, when he responded evasively, some said they would “march on to Jackson, to the Capitol, on the basketball team’s behalf.” The Student Senate voted unanimously in favor of going and collected two-thousand signatures on a petition supporting their position. Alumni groups, fans, and the faculty said the same.

All that enthusiasm could have come to naught, however. President Colvard wasn’t cautious for no reason: as a public university, MSU depended on the state for its funding, and Mississippi’s College Board would not want to cross the governor or the legislature. Coach McCarthy, a native Missippian and an MSU alumnus, knew that as well as anyone—earlier in his career, he had described himself as a “real true segregationist.” But Meredith’s admission to Ole Miss changed his mind, and he wanted to give his team—particularly the seniors—a taste of tournament action. Fearing another federal intervention (or even sanctions by the Southern Association of Colleges and Schools, the region’s accrediting agency), state leaders deferred to President Colvard, a North Carolinian and the first non-Mississippian to head the university. As historian Russell Henderson puts it: “Challenged as a leader, confident of alumni, faculty, and student support, emboldened by the public outpouring of sentiment favoring the team, and concerned that he ‘might not have the opportunity again,’ ” Colvard decided to let the team go. The state’s College Board reluctantly confirmed his decision.

Then a state senator and a former state senator obtained a temporary injunction from a county court, prohibiting the team from leaving the state. As Hinds County officers arrived to search for University officials and serve the injunction, the MSU athletic department put the team on a private plane and whisked it out of the state and out of harm’s way. One player reportedly said, “Now I know how those East Berliners feel when they make it past the wall.”

So the Bulldogs made it to the tournament, Joe Dan Gold shook hands with Jerry Harkness, the Loyola Ramblers won (with their African American players scoring all but two of the team’s 61 points), and the sky did not fall. In April, Mississippi’s College Board declined to make the “unwritten law” against playing integrated teams official, effectively ending official efforts to keep Mississippi out of the mainstream.

Of course, this hardly meant that resistance to integration disappeared overnight. Playing against integrated teams was one thing; having integrated teams was another. Perry Wallace, the first black basketball player in the Southeast Conference, took the floor for Vanderbilt (a private institution) in 1966. Frank Dowsing and Robert Bell, both football players, integrated varsity sports at MSU only in 1969.

Mississippi State’s story, however, is historically important for reasons beyond serving as a foil for Loyola’s inspirational narrative. It is one episode of many that not only reveals how important college athletics was to the South, but also how placing so high a value on athletics helped to displace segregation. On campus and especially off it, the great majority of the growing number of white Southerners—fans, alumni, faculty, businessmen, professionals, and others--who called on authorities to let the team go to the NCAA tournament were not civil rights crusaders. Like Billy Mounger and Ross Barnett, Jr., at Ole Miss, they wanted to repair the South’s reputation for their own reasons—to rehabilitate its reputation nationally and even internationally, to help the South participate in America’s life and prosperity. Consciously or (more likely) unconsciously, they were changing their minds, rearranging their priorities, even though for most of them there was no single, dramatic moment when they decided to change them. The path to the gym is not the road to Damascus.

“We were ambassadors for the South,” MSU player Leland Mitchell said years later, “though none of us realized it at the time.” In retrospect, it all seems clearer, at least to some of the participants. Harkness and Gold became friends, and, the Washington Post’s John Feinstein reports, “when Gold died [in 2011] Harkness attended the funeral. When he walked to the front of the church, the photo was next to the casket. ‘I lost it,’ Harkness said later. ‘There was no way I wasn’t going to be there. I know if it had been my funeral, Dan would have been there.’ ” (3) One small step at a time, repeated many times over. When you look back, it is remarkable how far you have come.

1. William Doyle, An American Insurrection: James Meredith and the Battle of Oxford, Mississippi, 1962).

2. The best, most detailed rendition of Mississippi State’s road to the 1963 NCAA tournament is Russell J. Henderson’s “The 1963 Mississippi State University Basketball Controversy and the Repeal of the Unwritten Law: ‘Something more than the game will be lost.’” in Journal of Southern History (November 1997), pp. 827-854.