The Long and Despicable Roots of Voter Suppression and Similar Tactics

by Frank Palmeri and Ted Wendelin 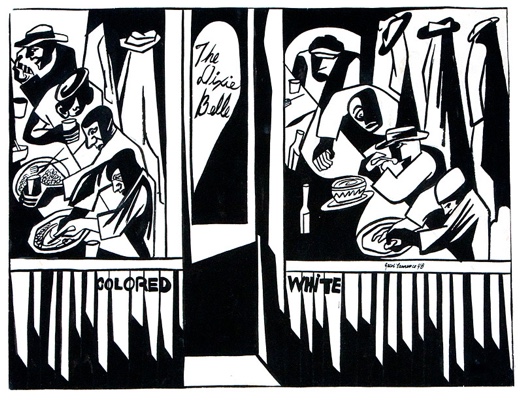 The South may have lost the Civil War militarily, but it won politically. For most of United States history, laws and policies that favor the South haveprevailed. Originally, this hegemonywas based on the Southern states’ paradoxical use of slavery to seize disproportionate power in national institutions. At the beginning of the Republic, slave states wanted to count each slave as one person for the purpose of apportioning representatives in the House. However, slaves had no civil rights, couldn’t vote, and would not in fact be represented by those elected on this basis; the North therefore took the position that slaves should not be counted as part of the population. As a compromise,the Constitution established that each slave counted as 3/5ths of a person. This compromise in effect gave the Southern states a third more seats in Congress, and a third more electoral votes than if slaves had not been counted as persons.

The 3/5ths rule guaranteed the dominance of Southern or slaveholder interests not only through the antebellum period but also thereafter through a long series of laws, practices, and Supreme Court decisions. For example, the Missouri Compromise in 1820 preserved the Constitutional compromise, and Southern ascendancy, by resolving that for each free state admitted into the Union, a slave state would also be admitted.

To prevent even any discussion of slavery from 1836-1844, the House of Representatives passed gag rules in the form of resolutions that tabled without discussion any anti-slavery petition. The Missouri Compromise was overturned by the Compromise of 1850, a body of laws that included the Fugitive Slave Act, which required citizens to assist in the recapture of escaped slaves. Further, in 1854, the Kansas-Nebraska Act left the decision of slave or free up to the territory applying for statehood, but resulted in battles between partisans of the two sides, as in Bloody Kansas, for example.

Of course, during the Civil War and Reconstruction, the South did not dominate national politics. However, as soon as the last Federal troops were withdrawn from the states of the Confederacy in 1877, the South developed new techniques for ensuring the disproportionate power of Southern white voters. Through murder, intimidation, and fraud, the former slave states disenfranchised their black citizens while using them to obtain anumber of representatives in Congress and the Electoral College based on total population in those states, including that black population. The South thus carried over the effects of the 3/5ths rule through the post-Civil War period of the nineteenth century and at least the first two-thirds of the twentieth century.

By the 1890s, Southern politicians had succeeded in imposing a legal regime of racial apartheid. Repeatedly re-elected by white voters in one-party states, Southern Democrats through their seniority controlled numerous chairmanships on important committees in Congress, giving them control over budgets, rules, and patronage projects. Their power enabled them to block federal legislation against lynching and other abuses in the South.

The racialsegregation of public schools, transportation, hotels, restaurants, restrooms, and drinking fountains, based on separate but supposedly equal accommodation of the races, was affirmed by the Supreme Court in Plessy v. Ferguson in 1896. This system for depriving blacks of their civil rights persisted for more than seventy years, until the effects of the civil rights legislation of the mid-1960s began to be felt.

Even the progressive reforms of New Deal legislation in the 1930s excluded African Americans from most benefits and protections. Since Southern Democrats were needed to pass any bill, Congress explicitly excluded occupations in which African Americans were strongly overrepresented, such as maids and farmworkers, from receiving Social Security benefits and worker protections such as minimum wage laws and the right to join unions. In addition, these laws were administered by local officials who were often ill-disposed toward African Americans, and Southern Democrats prevented Congress from attaching anti-discrimination provisions to social welfare programs.

Similarly, the practice of redlining developed by the Federal Housing Authority denied or limited mortgages and other financial services to neighborhoods based on racial composition. Redlining reduced the African American rate of home ownership, home values, and credit scores. In underdeveloped neighborhoods that local banks deemed unfit for investment because of redlining, African Americans’ access to banking, retail merchandise, and even groceries was and has continued to be severely limited.

The lack of financing that prevented most African Americans from buying homes limited their ability to leave their heirs an estate. Because inheritance is the principal driver for the acquisition of wealth in the United States, African Americans have thus been hamstrung for generations in the pursuit of the American Dream.

The only other time the South was unable to exert effective control over national political life, apart from the Civil War and Reconstruction, was during a period of about a decade beginning in the mid-late 1960's. The Civil Rights Act of 1964 and the Voting Rights Act of 1965 exemplify legislative accomplishments of this time that pulled the South into the twentieth century. The Fair Housing Act of 1968 outlawed redlining, but the damage had been done and could not be easily reversed.

Southern hegemonyreturned with the electoral “Southern strategy” pursued by Richard Nixon and subsequent Republican national candidates. The seventies saw a mass exodus of Southern whites and Southern politicians from the Democratic Party to the Republican Party, and that party moved further and further to the right, refining its use of racial code words to appeal to white voters centrally but not exclusively in the South. The Republican National Committee admitted the strategy of exploiting racial antagonisms and apologized for it to the NAACP in 2005; yet the party still pursues this path energetically, and the current Republican President has attracted and not disavowed the enthusiastic support of neo-Nazis and former Klan members in the South and in other regions.

Taking advantage of the elimination of crucial preclearance requirements in the Voting Rights Act by Shelby County v. Holder in 2013, current strategies for disenfranchising African Americans, college students, and the poorecho earlier Jim Crow, segregationist voter suppression tactics such as poll taxes, reading tests, and grandfather clauses. These practices include racially biased gerrymandering, extreme voter identification requirements, and use of the notorious Cross-Check system which allows state officials to purge from the rolls eligible voters who have the same minority-sounding names as others in different states, on the absurd theory that they may be the same person voting twice in the same election.

Thus, the instruments of racial oppression developed in the South continue to be employed today. Like wealthy slaveholders and their apologists, members of the far right today—and this includes a large majority of the Republican Party—share methods, language, and values that promote undemocratic results. They condemn the supposed tyranny of the federal government and feel themselves to be its innocent victims. As part of their plan to pursue small government and privatize enormous parts of public services, which the wealthiest among them will buy, control, and profit from, they attack public education, and attempt to deprive working people of retirement benefits, unions, healthcare, and safety and environmental protections.

The conviction by far-right Christians in the Bible Belt (and elsewhere) of their own righteousness arose in the post-Civil War era, when politicians who wanted to expel federal troops and force out African American officeholders came to call themselves Redeemer Democrats. White southerners appropriated the term from Christian theology to describe the political transformation they desired.

Thus, the disproportionate representation in the national government granted to the South by the 3/5ths rule in the Constitution was reestablished after the Civil War through voter suppression, backed up by terror, violence, and intimidation with the sanction of religion. As a result of the continuing dominanceof the South, the social welfare legislation of the New Deal applied almost exclusively to whites. Moreover, after the civil rights legislation of the 1960s, reactionary forces centered in and led by the South sought ways to evade or undermine these laws, beginning in the administration of Ronald Reagan, and continuing with increasing success in those of George W. Bush and Donald Trump.

For example, in 1981-82, as a conservative young lawyer in Reagan’s Justice Department, John Roberts crusaded against congressional renewal of the preclearance section in the Voting Rights Act. Thirty years later, as Chief Justice, he wrote the Shelby decision that invalidated that section and gutted the law. Roberts argued that preclearance violated the “equal sovereignty of the states,” a concept not found in the Constitution, but one which was used by Chief Justice Roger Taney as grounds for the notorious Dred Scott decision of 1857.

The results of the Civil Rights Act and the Voting Rights Act dragged an unwilling South into the twentieth century. In subsequent years the Republican Party, with its foundation now in the solid South, has done all it can to drag the country back into the nineteenth centurythrough egregious voter suppression, mass incarceration, and financial and economic deprivation—actions that are no longer limited to the South, but which manifest themselves in other regions of the U.S. as well. The intransigence of the South and its allies renders the future of the country contentious and bleak.