They Once Were the Future, then the Lowell, Massachusetts Textile Mills Went Out of Business

Robert Weible is past president of the National Council on Public History and the recently retired State Historian of New York and Chief Curator of the New York State Museum. He was the Historian at Lowell NHP from 1979 to 1989. 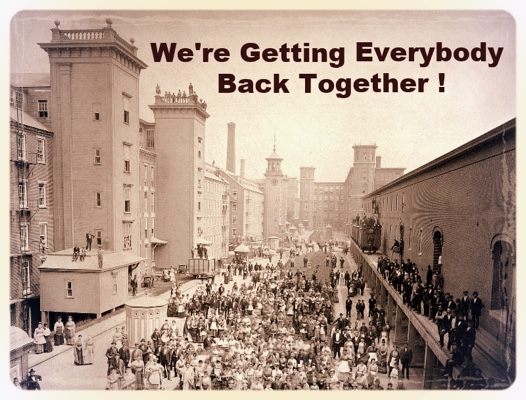 More than a few people thought Patrick J. Mogan was crazy when, during the 1960s, he proposed the creation of a national park in Lowell, Massachusetts—then one of the most depressed cities in America. A national park in Lowell? Please. Nothing there resembled Independence Hall or the Statue of Liberty, and there were no battles or presidents to commemorate in such a seemingly undistinguished factory town.

Mogan, though, was the city’s superintendent of schools, and he appreciated Lowell’s educational potential. So did Paul Tsongas, who argued before Congress that Lowell’s textile mills, canals, and especially its generations of immigrant workers were important, not just to Lowellians, but to the nation. Lowell, he said, was a place in which the good and bad in history could be preserved “rather than flattened or denied” and a place in which Americans could “rediscover a much neglected past.”

Historians, of course, knew all along that Lowell’s history was never really obscure. During the early 19th century, Lowell was America’s most heralded industrial city: the model for other manufacturing enterprises throughout New England and the place where Andrew Jackson, Charles Dickens, and many others came to see the future firsthand.

The people who claimed responsibility for all of this were wealthy merchants known as the Boston Associates. The Associates employed and provided wholesome, paternalistic care for young New England women (the famous Lowell “mill girls”), and theirs, they said, was a uniquely American undertaking: humane and socially beneficial, far different than the brutal English system and its dark satanic mills.

The Associates portrayed themselves as bold risk takers working in the public interest when they spent a million dollars or so on their 1821 development at East Chelmsford (renamed Lowell in 1826). And a number of Americans praised them for their efforts. East Chelmsford’s town minister, for example, had long believed that “on the enterprise, public spirit and religious example of the more wealthy and influential the prosperous state of society depends. They work the secret springs, which keep the life blood of community in motion and communicate vital warmth to the extremities of the body politic.”

Today we would call this kind of thing “trickle-down economics.”

Interestingly, the Associates never mentioned that their East Chelmsford risk was underwritten by an 1820 windfall from the federal government. As historians Carl Prince and Seth Taylor documented in 1981, Congressman-and-private-attorney Daniel Webster had arranged the transfer of at least a million dollars from the federal government to Associates-owned insurance companies (part of a settlement with Spain to cover Napoleonic Era commercial losses). A coincidence? Perhaps, but the Associates did reward Webster (alone among non-investors) with lucrative company stock and, for years afterwards, lined his pockets for helping out with tariff, bankruptcy, patent, and other legislation.

Clearly, conflict of interest laws were different then. But the practice of promoting laissez-faire public policies when it came to taxing corporate profits, regulating factory conditions, protecting workers’ rights, etc., while manipulating the power of government to guard well-to-do private interests seems to have been as common in the 19th century as it is today.

No surprise, then, that the Associates railed against paying taxes to support public education and other community needs in Lowell. And when “mill girls” protested working conditions in the 1840s, owners finally gave up the pretense of paternalism. They began recruiting wave after wave of poorly paid immigrant workers and left families to care for their own well-being, perhaps with whatever support religious or charitable institutions could muster. And although immigrants faced harsh and often difficult circumstances, these new Americans created the culturally vibrant communities that would become the heart of an innovative educational initiative a century-an-a-half later.

The textile mills continued to grow, meanwhile, and began to reach capacity in the 1890s. Afterwards, owners allowed the factories to deteriorate and invested in money-making schemes elsewhere. Most of the mills closed in the 1920s and when the last mill shut its doors in the 1960s, Lowellians decided to make their own history, not by waiting for wealth to trickle down magically from above, but by capitalizing on the power of their heritage. And now, forty years later, Americans everywhere have more reason than ever to come to Lowell, celebrate a determined people’s history, and learn from it.