Why the Wartime TV Series “A French Village” Is Important 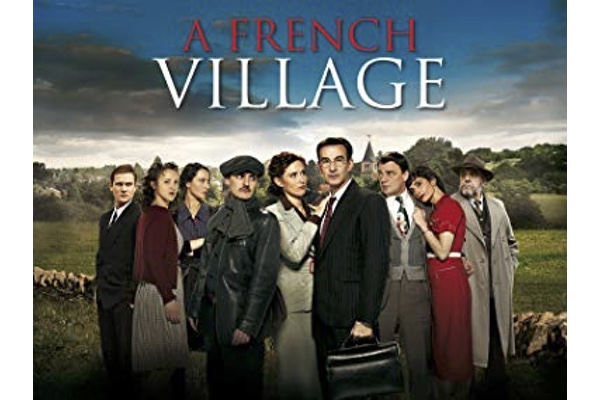 Having recently watched 72 full-length (42-55 minutes each) episodes and 18 shorter (none longer than 7 minutes) historical commentaries of the French TV series "A French Village"(FV), this reviewer feels enriched by the experience. Here's why it seems valuable, especially for potential viewers in this country.

● FV presents an interesting, entertaining, and nuanced depiction of the French fictional village of Villeneuve during World War II. Close to the French-Swiss border and just north of the puppet state of Vichy, it was occupied by the German Nazi regime from 1940-1944.

● The actors in the seven-season series are first rate. For example, Fabrizio, who has a central role as the communist Marcel Larcher, was Joseph in the excellent film The Son of Joseph. Two of the other lead actors, Audrey Fleurot (as Hortense Larcher) and Thierry Godard (as Raymond Schwartz) have main roles in the highly-rated series Spiral (like FV, available on the MHz streaming service). The most likable characters have their imperfections, and even the most despicable (like the German SS officer Heinrich Müller played by Richard Sammel) have some redeeming qualities. Although the series depicts some of the Germans' atrocities, e.g. in their treatments of Jews and hostages, it attempts to be realistic and fair in portraying the noble and ignoble actions of its characters whatever their nationality,

● Never having lived under military occupation by a hostile foreign power, most North Americans have little appreciation for how complex everyday life could become under such conditions.

● Although most people would like to think that they would resist the Nazi invaders and not cooperate with them in any way, the reality for occupied peoples—under the Germans and other occupiers—was usually much more varied. FV depicts this well. Some collaborated; some cooperated partly; only a small minority engaged in active resistance.

● The subjects treated in the 18 historical commentaries (six each at the end of seasons 1-3) give some idea of the content of the 72 episodes. They include treatments of the fate of the Jews, the origin and development of the resistance, the status of women, Franco-German love affairs, the French elites, hostages, police terror, London's connection with the resistance, French collaboration, the black market, the effects in France of the German invasion of the USSR in 1941, and a few other topics. The distinguished French historian Jean-Pierre Azéma provides an overview of selected topics and French men and women who lived through the occupation comment on them and on their experiences regarding them.

● Other occurrences that are well dramatized in the series include the effects of the occupation on marital and family dynamics (one main character, for example, has an adulterous affair with a German SS officer); the working and social relations between German occupiers and French authorities such as mayors, businessmen, police, and school principals; the excruciating moral choices often necessary for the French (for example, one French Jew is told that if he provides information about resisters his wife and daughter possibly could be freed from a Polish camp); the rivalries between various French political factions, especially among French communists and between them and other groups; in 1944 and 1945 the relations between the U.S. Army and the liberated French; the French treatment of various collaborators in that same period, ranging from execution to lesser punishments.

● As varied as the topics treated are the series settings: homes; a school; the offices of the French police and officials, the German military, and the SS; farms; streets, fields, yards; cafes; a brothel; a lumber yard; an art gallery; courtrooms; prison cells; military camps; and forest areas. In these locations we see eating, lovemaking, meetings, torture, hangings, shootings, parties, caring for the sick and wounded, and family interactions.

● Matters dealt with in the series continue to be important today, especially the individual's responsibility in dealing with social and political evils and how societies should deal with past evils they committed. Related to these items are:

A 2018 Polish anti-defamation law declaring that it is illegal to state that the Polish nation or state bears any responsibility for the Holocaust. One historian expressed the fear that it would “suppress genuine research and also open discussion about the truth and whether we are allowed to talk about our dark past openly.” She added, “The truth is that there were many extremely brave people who decided to risk not only their own lives but also the lives of their families to rescue Jewish people. But the truth is also that there were many Poles who decided to betray their Jewish friends and their Jewish neighbors who were often living in hiding.” “A French Village” and what we know of history indicates that this was also true of France and other German-occupied areas. And historian Daniel Goldhagen's Hitler's Willing Executioners: Ordinary Germans and the Holocaust (1996) stirred up considerable controversy about the extent of ordinary Germans' complicity in anti-Jewish atrocities.

Various historical examples of how to deal with collaborating with the enemy and other past evils.

For France, and Europe generally, historian Tony Judt provides a good overview in his chapter “Retribution” in Postwar: A History of Europe Since 1945 (2006). He indicates that in France about 10,000 people suspected of collaborating with the Germans were killed, many by armed resistance groups in ‘extra-judicial’ proceedings, most of them in 1944, before after the June Normandy Beach invasion. From 1944-51“official courts in France sentenced 6,763 more people to death, but “of these sentences only 791 were carried out.” The chief punishment the courts handed down to almost 50,000 persons, between 1944 and 1951 was “national degradation.” Those so sentenced included a variety of offenders who had given aid to Germany or other Axis powers. Those receiving the sentence included various Vichy officials and members of pro-collaboration organizations, and the sentenced lost their civil and professional rights, thus becoming second-class citizens—In “A French Village” a court makes an exception for Doctor Daniel Larcher (Robin Renucci), one of the main characters and also an ex-mayor of Villeneuve; because of the shortage of doctors, it allows him to continue his practice while still depriving him of other rights. (An official tried along with him was less fortunate and received the death penalty.)

FV illustrates well Judt’s contention that “many men and women were unfairly singled out and punished. Many more escaped retribution altogether. There were multiple procedural irregularities and ironies, and the motives of governments, prosecutors and juries were far from unsullied—by self-interest, political calculation or emotion. This was an imperfect outcome. But . . . . in the circumstances of 1945 it is remarkable that the rule of law was re-established at all.”

Judt also mentions that many French women were accused of “collaboration horizontale” with German soldiers, and “all over France there were scenes of women stripped and shaved in public squares, often on the day of local liberation from the occupiers or very shortly thereafter.” FV features two major female characters who have liaisons with German occupiers, one a soldier and the other the SS officer Müller. The latter woman, Dr. Larcher’s wife (Hortense), has her head shaved by angry townspeople after German authority in Villeneuve collapses.

The aftermath of World War II also produced the famous Nuremburg Trials (1945-49), which led to the execution of some leading Nazis. World War I produced nothing comparable, but the Germans and other defeated powers were forced to pay reparations worth billions of dollars because the victors declared them responsible for the war. Reparations were also paid by Axis countries following WWII.

A different approach than that of Nuremburg was taken in South Africa after the collapse of the evil of apartheid. In 1996 the Truth and Reconciliation Commission (TRC) began hearings. It sought reconciliation and what is sometimes called restorative justice rather than the retributive justice sought at Nuremburg. (As one source states it: “TRC represented a new global trend . . . by embracing reconciliatory and restorative measures, combined with an investigation into the past human rights violations.”)

Following South Africa's example, some other countries established TRCs truth and reconciliation commissions. One of them was Canada, where in 2008 a TRC on Indian residential schools was established.

In the commission’s summary of its final report (2015), it declared,

Canada’s residential school system for Aboriginal children was . . . . created for the purpose of separating Aboriginal children from their families, in order to minimize and weaken family ties and cultural linkages, and to indoctrinate children into a new culture—the culture of the legally dominant Euro-Christian Canadian society. . . . The schools were in existence for well over 100 years. . . .

. . . The central goals of Canada’s Aboriginal policy were to eliminate Aboriginal governments; ignore Aboriginal rights; terminate the Treaties; and, through a process of assimilation, cause Aboriginal peoples to cease to exist as distinct legal, social, cultural, religious, and racial entities in Canada. The establishment and operation of residential schools were a central element of this policy, which can best be described as “cultural genocide.”

Although the United States has never established a national TRC, U.S. governments have perpetrated or approved of great evils that have stained our nation’s history, especially our treatment of Native Americans and African Americans (slavery, segregation, etc.), and there have been several local TRCs. One was set up in Greensboro, NC following the 1979 killing of protestors against racial and economic injustice by Ku Klux Klan and Nazi Party members. In 2012 the state of Maine and the Wabanaki tribal governments located within its boundaries established a TRC to examine past state discrimination against Native American children, especially regarding forced foster care.

From time to time calls for reparations for blacks have surfaced. In 2014 Ta-Nehisi Coates, a regular writer for The Atlantic and author of the acclaimed Between the World and Me(2015) and other books, wrote an Atlantic essay arguing the case for reparations to blacks. He argued that the payment of reparations is a moral obligation and that it “would represent America’s maturation out of the childhood myth of its innocence into a wisdom worthy of its founders.”

Mistreatment of Native Americans has also been of epic proportions. Some have labeled it genocide. In 2014, a New York Times article declared that “America’s moral debts to African-Americans and American Indians are shockingly deep and wide. . . . But while African-Americans eye individual payments, Indian tribes seek control over lands and natural resources taken from them by the United States and state governments.”

Whether reparations, restitution of lands and resources, or some other type of amends for past wrongs, “until we reckon with our compounding moral debts,” Coats thinks, “America will never be whole.”

Although we Americans never experienced the type of evils depicted in "A French Village," we have had our own share of horrible experiences, ones that left deep personal, economic, and social scars among Native Americans and blacks. Like the French at the end of WWII, we still need to ask ourselves what responsibilities we have for these past evils and how best to atone justly for them and reconcile divided parts of our nation. Pervasive opposition to any sort of national atonement does not mean that fair-minded citizens should believe it is unnecessary.