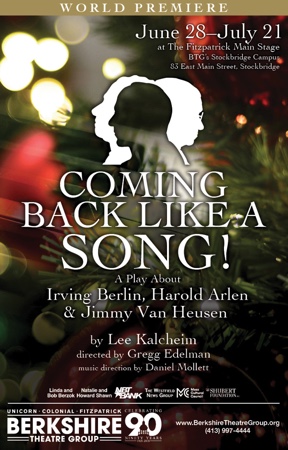 It is Christmas Eve, 1956, and three fabled American songwriters, Irving Berlin, Harold Arlen and Jimmy Van Heusen, meet in Berlin’s New York City apartment. It is snowing heavily outside as carolers roam from block to block. The three composers are angry because Elvis Presley and rock and roll music is pushing them off the music charts. “Is this the end?” one asks.

They sneer, they pout, they groan, they moan.

Coming Back Like a Song, a new musical by Lee Kalcheim, that just opened at the Fitzpatrick Theater, in Stockbridge, Massachusetts, in the Berkshires, tells their story in one holiday night. Throughout the evening the trio sing their hits, and it is a winter wonderland of music with songs such as “White Christmas,” “Always,” “God Bless America,” “Cheek to Cheek,” “The Man that Got Away,” and “Swingin’ On a Star.”

During the course of the night, Arlen learns that he will not be able to bring his wife home from the mental hospital, as he had hoped. The bad weather will prevent Van Heusen, who has so much bad luck with women, from flying to Palm Springs for Frank Sinatra’s annual Christmas Party.

Nothing really happens in Coming Back Like a Song. There is no substantial plot and little drama and just a thin coat of comedy. It is not memorable in any way. There is a lot of charm in it, though. It is a nice evening in the theater, a nostalgic chestnut, and there’s nothing wrong with that, especially for a summer theater.

The charm is in the songs, the stories connected to them, and the development of the characters of the three songwriters. It is also a nice little history play. You learn a great deal about entertainment history from 1911 to 1956. Berlin plays Alexander’s Ragtime Band, that got him started in show business, and then launches into his other big songs, such as “God Bless America” and the connection between show business and American life becomes obvious. He tells a lot of funny stories as he recounts his illustrious career, such as tales of working with the zany Marx brothers. Arlen does the same thing, sitting on a chair and singing “Somewhere Over the Rainbow.” You learn about the Broadway producing business, public relations, critics, the mob’s influence in show business, top tune charts, how to write a musical and how to toil in Hollywood for movie producers who may or may not understand what story a song is telling.

The three stars of the show, David Garrison as Berlin, Philip Hoffman as Arlen and David Basche as Van Heusen, give solid performances. Director Gregg Edelman does sturdy work in letting them tell their stories in an entertaining way. They take turns using the lone piano on the lovely living room set to sing their hits and get the other two to act s back up singers. I don’t think they played all of any one song, just bits and pieces, but it was enough to make the show a summer night’s delight.

The three ended the play by writing their own rock and roll song. It was just dreadful.

Of course, Elvis did not end their careers, or the careers of other Broadway composers. Ask Leonard Bernstein, Andrew Lloyd Webber or Stephen Sondheim.