Why Is NASA Spending Billions to Build a Rocket When Elon Musk Has a Cheaper One?

James Stejskal is a military historian and conflict archaeologist, a former Green Beret and CIA operations officer, who has always had wanted to fly to Mars. 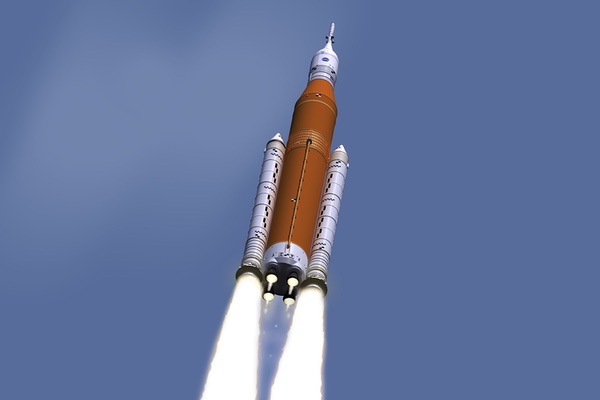 A rendering of the Space Launch System Block 1 (NASA)

NASA’s congressionally-mandated Space Launch System (SLS) was envisioned to take the United States to the Moon and beyond. Thus far, however, it has failed to launch and many are calling for the program to be terminated because of high costs and delays.

SLS replaced Constellation, which was NASA’s manned spaceflight program. It had similar lofty goals but ran into funding problems and was cancelled when President Barack Obama signed the NASA Authorization Act of 2010. But, despite the adoption of the SLS, little has happened since and the delays keep piling on. Now SLS’s first launch may not happen until the second half of 2020.

SLS’s main selling point is that it is a super heavy lift spacecraft. It will be capable of carrying payloads of 130 metric tons with diameters up to 9.1 meters into orbit. The flip side of this is that development and launch costs are expensive – opponents of SLS say prohibitively expensive.

The probable near-term availability of commercial heavy-lift spacecraft like SpaceX’s Big Falcon Rocket has not done much for the program either, the argument being: why build SLS if Elon Musk can build a similar system for cheaper? According to SpaceX estimates, the Big Falcon Rocket will cost less than the $90 million it now costs to launch its already available and reusable Falcon Heavy. Compare that to the $1 billion per launch the SLS will cost and you can understand why many people are wondering why SLS is needed.

By some peoples’ reckoning, former Space Shuttle Manager Wayne Hale among them, four or five SpaceX Falcon Heavy rockets could be purchased and used instead of one SLS. While true, Falcon Heavy can only lift 64 tons.

So, why is it that SLS is still in the running? One reason might be the crew capsule, which requires much more engineering than a cargo rocket. The loss of a cargo ship is one thing, the loss of a manned mission is a whole different kettle of fish. While SpaceX and Jeff Bezos’s Blue Origin have demonstrated they can build cheaper rockets, the verdict is still out on how much money they will need to ensure the safety of their human passengers and crew. It should be noted that SpaceX has not yet tested the Big Falcon Rocket and, in any event, it would not be capable of carrying NASA’s manned Orion exploration capsule. Its promise is just that, a promise.

A second reason is that SLS has been designed to carry wider and heavier payloads into deep space in one launch, a unique capability NASA believes is critical to future programs. They want to launch complete systems not components that will require several launches and assembly in space. In fact, NASA may even be able to launch the Orion capsule to the moon with SLS earlier than the current 2023 schedule if it configures the SLS (Block 1B) with a more powerful second stage.

A further unstated concern, is with Elon Musk himself. NASA has always been worried about placing too much reliance on private companies and Musk’s current troubles with the SEC have done nothing to assuage that worry.

NASA believes there will always be a role for SpaceX, as well as Blue Origin and United Launch Alliance. (ULA is the builder of the Delta IV heavy lift rocket.) NASA says those companies can play a role “bringing cargo and doing routine servicing.” As it is, SpaceX’s launches are critical to the military and to companies like Iridium which is upgrading its GPS satellite fleet. Conversely, SpaceX relies on government contracts to remain solvent.

One final reason brings back images of Sputnik: both China and Russia are developing comparable rockets. No American politician wants to see the US fall behind in space again.

It is clear, at least at this stage, that NASA needs a super heavy lift rocket like SLS. It will require the capability not only to put Orion into deep space, but for other projects like the Lunar Orbital Platform-Gateway, a small moon-port that is needed to support deep space exploration.

NASA’s SLS is currently the only program that can foreseeably meet those needs. Perhaps commercial rockets will replace the government versions in the future but only when they have demonstrated their capabilities and regularity. For the moment NASA still needs SLS.