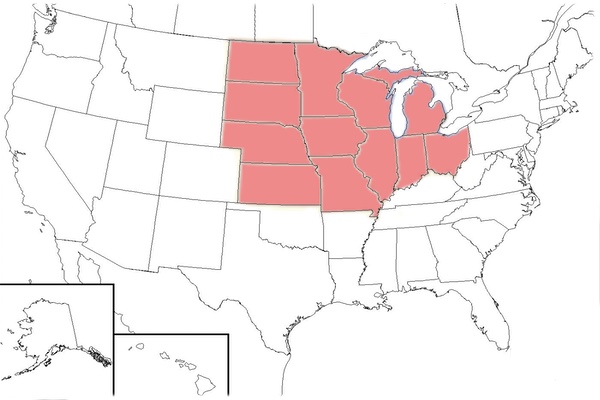 The Midwest is the heartland of America, both in history in the past, and in the political present and future.

Ridiculed by many on the Atlantic and Pacific Coasts as the “Fly Over” states, the facts are clear that these states in the heartland pack a “wallop.” The Midwest has been a major factor in numerous elections in the past with the potential to determine the national political trend in the present and the future.

The Midwest historically has been the heritage of eleven GOP Presidents – Abraham Lincoln from Illinois; Ulysses S. Grant, Rutherford B. Hayes, James A. Garfield, William McKinley, William Howard Taft, Warren G. Harding from Ohio; Benjamin Harrison from Indiana; Herbert Hoover from Iowa; Dwight D. Eisenhower from Kansas; and Gerald Ford from Michigan. Also, two Republican Presidential nominees were from Kansas, along with Eisenhower—Alf Landon in 1936 and Bob Dole in 1996.

We have also seen many Vice Presidents from the Midwest, including six from Indiana, two from Illinois, two from Minnesota, and one each from Kansas, Iowa, Missouri and Michigan.

It is also a reality that Ohio and Missouri have been particularly crucial “swing states.” Ohio has been very significant for the Republican Party, as every President of their party has won Ohio, and when Gerald Ford, who succeeded to the Presidency under the terms of the 25th Amendment, lost election to a full term in 1976, a major reason for the defeat was that he lost Ohio by 1/4th of 1 percent (about 11,000 votes) to Jimmy Carter.

Potential Midwestern candidates running for the Presidency in 2020 include the following Republicans: outgoing Governor of Ohio John Kasich and Vice President Mike Pence of Indiana; and the following Democrats: Senators Amy Klobuchar of Minnesota and Sherrod Brown of Ohio. And one never knows if others might emerge over the next year, as every presidential election seems to feature surprise contenders.

Many Midwestern governorship races seem to be trending Democratic in Ohio, Illinois, Michigan, Wisconsin and Minnesota (only Minnesota presently has a Democratic governor). If Democrats prevail in November, the Midwest could transform American politics by shaping the reapportionment of seats in state legislatures and the House of Representatives after the 2020 Census figures are tabulated.

Considering how small margins in several Midwest states determined the election results in 2016, for any political observer to underrate the importance of the Midwest, particularly based on the history of that section’s impact, would be folly. So despite all of the attention that will be given to Atlantic Coast and Pacific Coast Presidential contenders, and the role of governors and senators from those sections, one can expect the Midwest to play a significant role in American politics into the long term future.