FDR Gets Credit for His Response to Kristallnacht. He Shouldn’t. 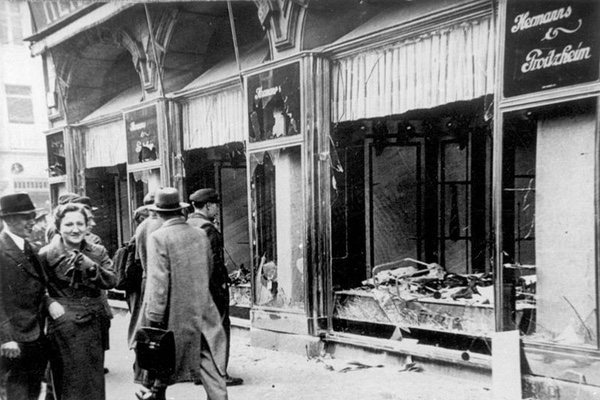 This week marks the 80th anniversary of the Kristallnacht pogrom in Nazi Germany. How is it that even after eight decades, some new museum exhibits, history websites, and biographies of President Franklin D. Roosevelt continue to misrepresent his response to the pogrom?

On the night of November 9-10, 1938, the Nazis unleashed a nationwide hurricane of violence against Germany's Jews. Hundreds of synagogues were torched, the windows of thousands of Jewish businesses and homes were smashed, about one hundred Jews were murdered, and 30,000 more were dragged off to concentration camps.

At his first press conference following the violence, on November 11, President Roosevelt was asked if he had “anything to say about the Nazi Government’s extended campaign against the Jews.” He replied: “No, I think not, Fred; you better handle that through the State Department.”

So how is it that Robert Dallek’s recent biography, Franklin D. Roosevelt: A Political Life, the website History.com, and the new “Americans and the Holocaust” exhibit at the U.S. Holocaust Memorial Museum, all claim that FDR “harshly denounced” the pogrom?

Simple: they brush past his November 11 conference, when the president refused to say anything about the pogrom, and skip ahead to his next one, when he finally did. Skipping past the parts you don’t like is not a particular responsible—or accurate—way to write about history, needless to say.

In the face of international front-page news coverage and mounting public outrage over the Nazi atrocities, Roosevelt finally broke his silence nearly a week after the pogrom. At his November 15 press conference, the president read a four-sentence condemnation which, remarkably, did not specifically mention either the Hitler regime or its Jewish victims. He said "the news of the past few days from Germany" had "shocked public opinion," and he "could scarcely believe that such things could occur in a twentieth century civilization."

The Holocaust Museum’s exhibit portrays the president’s statement as a bold and extraordinary step. It asserts that “FDR made an exception to his practice of off-the-record press conferences by allowing newspapers to quote this statement [criticizing the pogrom] from his November 15, 1938 meeting with reporters.” The exhibit’s curators evidently believe Roosevelt deserves special praise for allowing himself to be quoted from a scripted statement that he himself had just read aloud to reporters.

Roosevelt also announced that the U.S. ambassador in Germany was being instructed “to return at once for report and consultation.” History.com and the Dallek book state that FDR “recalled” the ambassador, erroneously implying that he severed diplomatic relations with Nazi Germany, which he did not do.

Neither the web site, the book, nor the museum explain that FDR’s policy throughout the 1930s was to maintain friendly trade and diplomatic relations with the Hitler regime. Nor do they mention that Roosevelt even went so far as to personally delete anti-Hitler references from three speeches delivered by Interior Secretary Harold Ickes in 1935 and 1938.

Nor do these three sources acknowledge the president’s pointed refusal to say anything further about the pogrom. At the November 15 press conference, after the president announced that he would consult with the ambassador, a reporter asked: “Would you elaborate on that, sir?” FDR declined the opportunity to speak further on the subject, saying his statement “speaks for itself.” Another reporter asked, “Have you made any protest to Germany?” The president responded: “Nothing has gone that I know of.”

With regard to the ambassador, the Holocaust museum exhibit emphasizes that the U.S. “was the only nation” to take such action. Curiously, however, when it comes to U.S. immigration policy in the wake of Kristallnacht, the exhibit does not compare Roosevelt’s response to that of other world leaders.

Perhaps that’s because such a comparison would reveal that Roosevelt’s response was far less generous than that of, for example, the British. Even though Great Britain is less than one-fortieth the size of the United States and was directly threatened by Nazi Germany, the British admitted 10,000 German Jewish children on the kindertransports, as well as 15,000 young German Jewish women as nannies and housekeepers.

The museum’s exhibit goes on to report that in response to Kristallnacht, Roosevelt “allowed 12,000 Germans on visitor’s visas to stay” in the United States six months longer, after the expiration of their visas. (The idea of extending those visas actually was proposed by Secretary of Labor Frances Perkins, but for some reason the museum gives the president all the credit for it.)

At his November 15 press conference, President Roosevelt said he was not certain of the number of refugees whose visas would be extended. He suggested to reporters that they check with the Secretary of Labor regarding the number, and then said he was “inclined to think that they run as high as twelve to fifteen thousand.” That figure was widely reported at the time, and repeated in many subsequent histories of the period as evidence of Roosevelt’s determination to find ways to assist Jewish refugees despite legal restrictions.

In reality, however, the gesture was considerably less magnanimous than it seemed. The Commissioner of Immigration and Naturalization, James Houghteling, soon afterwards reported that the actual number of German citizens (not all of them Jews) who received extensions on their tourist visas was no more than 5,000.

It is not clear why the Holocaust Museum’s exhibit omits Houghteling’s correction of FDR’s estimate. This omission is particularly glaring because the first historian to publish Houghteling’s statement was none other than Barbara McDonald Stewart (1926-2015), who enjoyed a close relationship with the U.S. Holocaust Museum for many years. Her family gave the museum the diaries of her late father, refugee advocate James G. McDonald, and she co-edited three volumes of the diaries, which were co-published by the Museum.

Yet for some reason, the designers of the new exhibit skipped over Dr. Stewart’s important contribution to the historiography of America’s response to Kristallnacht. (Astonishingly, the exhibit also omits any mention of James McDonald.)

History.com and the Dallek bio, too, are misleading—each in their own way—concerning the question of refugee immigration in the wake of Kristallnacht. The website claims that part of the reason more refugees were not allowed into the U.S. following the pogrom was the influence of Assistant Secretary of State Breckinridge Long. There’s just one problem with this theory: Long did not join the State Department until fourteen months after Kristallnacht.

Prof. Dallek, for his part, ticks off a list of circumstances which, he says, “combined to discourage Roosevelt’s humanitarian impulses” following Kristallnacht, from “his defeat in the Court packing fight” to anti-immigration sentiment in Latin America. Besides, Dallek says, “he had to honor the quotas allowed under the [existing U.S. immigration law].”

In fact, there were a number of ways that the president could have provided haven to German Jewish refugees without challenging the immigration quotas or battling Congress.

For example, the governor and legislative assembly of the Virgin Islands offered to open their territory to refugees following Kristallnacht. But FDR refused to authorize temporary haven in the islands. He opposed settling any substantial number of Jewish refugees in regions that were in close proximity to the U.S. mainland. Neither History.com, the Dallek book, or the U.S. Holocaust museum’s new exhibit make any mention of the Virgin Islands opportunity.

Under ordinary circumstances, historical documents become accessible with the passage of time, shedding fresh light on the past. But when the chroniclers of history are biased or careless, distortions of the historical record can persist for many decades. The portrayal of President Franklin D. Roosevelt's response to Kristallnacht as forceful and impressive is a glaring example of this unfortunate phenomenon.