David Gunderman is a Ph.D. student in Applied Mathematics at the University of Colorado.

There are two things that connect the names Gauss, Riemann, Hilbert and Noether. One is their outstanding breadth of contributions to the field of mathematics. The other is that each was a professor at the same university in Göttingen, Germany.

Although relatively unknown today, Göttingen, a small German university town, was for a time one of the most productive centers of mathematics in history.

Göttingen’s rise to mathematical primacy occurred over generations, but its fall took less than a decade when its stars were pushed abroad by the advent of National Socialism, the ideology of the Nazi Party. The university’s best minds left Germany in the early 1930s, transferring its substantial mathematical legacy to Princeton, New York University, and other British and American universities. By 1943, 16 former Göttingenfaculty members were in the U.S.

The story of the rise and fall of mathematics in Göttingen has largely been forgotten, but names associated with the place still appear frequently in the world of mathematics. Its legacy survives today in other mathematical research powerhouses around the world.

Founding of the university

In 1734, King George II, who ruled both the United Kingdom and a large area of land in Northern Europe, founded a university in Göttingen, Germany.

The Enlightenment was by this point in full swing in northern Germany. For example, mathematician Gottfried Leibniz developed calculus less than 100 miles north of the new university, just 50 years before its founding.

Finding themselves in the midst of the Enlightenment, scientific researchers at the new University of Göttingen had more academic freedom than generations past. They were promised intellectual autonomy and freedom from close religious supervision. Instead, they were recruited solely to advance knowledge and carry out original research. The education of students was also more egalitarian than it had been previously in Europe, as both rich and poor were admitted and trained. 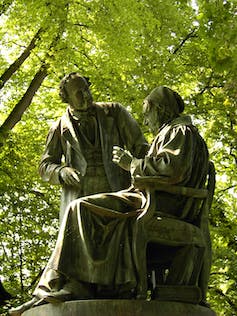 A monument in Göttingen depicting Gauss with physicist Wilhelm Weber.Longbow4u/Wikimedia

By the late 18th century, the university in Göttingen was a well-known center of scientific learning in Germany. Its enduring mathematical prowess, however, originated in Carl Friedrich Gauss. Often referred to as the prince of mathematics, his research at Göttingen between 1795 and 1855 spanned from algebra to magnetism to astronomy.

Gauss’s discoveries were groundbreaking, but the reputation that he started in Göttingen only grew as mathematicians from across Europe flocked to the town. Bernhard Riemann, the head of mathematics at Göttingen from 1859 to 1866, invented Riemannian geometry, which paved the way for Einstein’s future work on relativity. Felix Klein, the chair of mathematics from 1886 to 1913, was the first to describe the Klein bottle, a 3-dimensional object with just one side, similar to the Mobius strip. 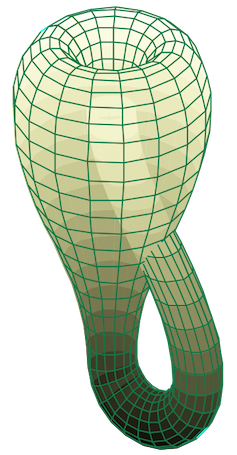 A Klein bottle is a two-dimensional surface – its inside is its outside. Tttrung/Wikimedia, CC BY-SA

Klein was instrumental in hiring the next generation of mathematicians to Göttingen. This generation included Carl Runge, who helped invent a key part of today’s most accurate weather prediction software, the Runge-Kutta time stepper; Hermann Minkowski, who is perhaps best known for his work on relativity; and David Hilbert.

Hilbert’s famous 23 problems, presented at the International Congress of Mathematicians in 1900, guided mathematical research for the entire 20th century. During his career as professor and head of the math department at Göttingen, he mentored an astounding 76 Ph.D. students, many of whom went on to make seminal discoveries of their own.

After Gauss’s appointment at the university until the early 1930s, Göttingen’s mathematical prowess survived in an environment of constant political turmoil, including the Napoleonic Wars, the Franco-Prussian War and World War I.

But the wave of nationalism that accompanied the Nazis’ rise to power in the early 1930s transformed Göttingen. The 1933 Law for the Restoration of the Professional Civil Service made it illegal for any non-Aryan, specifically Jews, to serve as a professor or teacher in Germany. In response to this and other anti-Semitic legislation, Jewish scholars, professors with Jewish connections and anyone who opposed Nazism fled Germany. 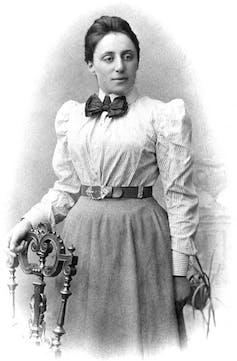 Hilbert was asked in 1934 by the minister of science under the Nazi regime whether mathematics in Göttingen had suffered from the departure of the Jews and friends of the Jews. He replied: “Suffered? It hasn’t suffered, Mr. Minister. It doesn’t exist anymore!” Hilbert was right. Only one of the pre-Nazi full professors stayed past 1934.

The center of mathematics shifted quickly during the Nazi era and in the wake of World War II. Courant, Weyl and others helped move it to the U.K. and the U.S., where most of the top-ranked mathematics programsare located today.

These countries’ mathematical heritage is in Göttingen. Its story is their story.