The Cost of Corruption in the Balkans

by Abrana Xharra and Alon Ben-Meir

Dr. Alon Ben-Meir is a professor of international relations at the Center for Global Affairs at NYU. He teaches courses on international negotiation and Middle Eastern studies. Arbana Xharra authored a series of investigative reports on religious extremists and Turkey’s Islamic agenda operating in the Balkans. She has won numerous awards for her reporting, and was a 2015 recipient of the International Women of Courage Award from the US State Department. 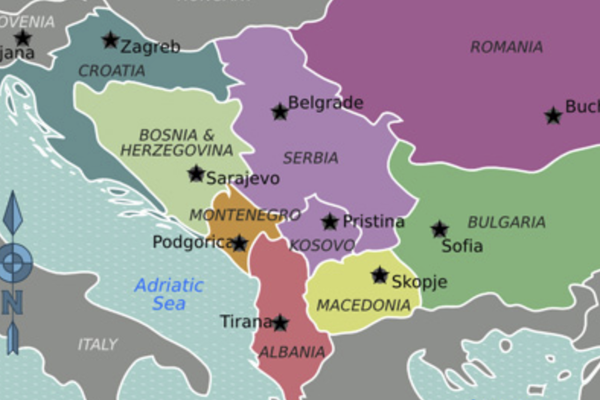 The six Western Balkan countries —Serbia, Bosnia and Herzegovina, Kosovo, Macedonia, Montenegro, and Albania—are “state captured” by corrupt politicians linked with organized crime. These facts have been documented by various international reports, which are raising major concerns among EU officials on the enlargement process.

These countries are expected to meet social, political, and human rights standards as fundamental qualifications for joining the EU. The EU, however, is becoming increasingly doubtful that the Balkan countries can meet these standards, as their social and political life is deeply beset by corruption. Nevertheless, the efforts to eradicate corruption must not stop.

The six constituent republics that once made up the Socialist Federal Republic of Yugoslavia (SFRY) were Bosnia and Herzegovina, Croatia, Macedonia, Montenegro, Serbia, and Slovenia, while Serbia contained two Socialist Autonomous Provinces, Vojvodina and Kosovo. The socialist state created after the German occupation in World War II brought together Serbs, Croats, Bosnian Muslims, Albanians and Slovenes.

In the early 1990s, many of the republics began to declare independence from the Socialist Federal Republic of Yugoslavia. Despite European blessing for the new states in a 1992 referendum, war quickly erupted. Yugoslav army units, withdrawn from Croatia and renamed the Bosnian Serb Army, carved out a huge swath of Serb-dominated territory. Over a million Bosnian Muslims and Croats were driven from their homes through ethnic cleansing.

In August 1995, the Croatian army stormed areas in Croatia under Serb control, prompting thousands to flee. Soon Croatia and Bosnia were fully independent. Slovenia and Macedonia had already declared independence. Serbia and Montenegro also had their own governments under separate constitutions. In 1999, Kosovo's ethnic Albanians fought Serbs in another brutal war to gain independence. Serbia ended the conflict beaten, battered, and alone.

Today, these nations are troubled by corruption. Lavdim Hamidi, the Editor-in-Chief of Kosovo’s newspaper Zeri, who investigated corruption in the Balkans, says that “The Balkan states undoubtedly are at the top of the list of the most corrupt countries in the world.”

The 2017 Corruption Perceptions Index highlights that the majority of the Balkan countries are making little or no progress in ending corruption. Journalists and activists in these countries are risking their lives every day in their effort to expose corrupt leaders. The index ranks 180 countries and territories by their perceived levels of political corruption, with 1 being the least and 180 the most corrupt.

Of all the Balkan counties, Macedonia is most corrupt, ranked 107th. Two months ago, Macedonian ex-Prime Minister Nikola Gruevski sought asylum in Hungary over a wire-tapping scandal for which the court found him guilty. Xhemal Ahmeti, an expert on Balkan political affairs, says that Macedonia and other Balkan countries are the same as in Nigeria or anywhere else corruption takes place behind the mask of tribal, family, clan, and ethnic ties.

“The ‘elites’ in these countries” says Ahmeti, “have always been at work to convince their publics that they are mistakenly accused of corruption by Westerners.”  Accordingly, the EU and international observers in Macedonia will not succeed in fighting corruption without direct and active monitoring on the ground.

Kosovo is the second most corrupt country in the Balkans, ranked 85th. Since it declared its independence in 2008, Kosovo has provided many opportunities for its political leaders to become extremely rich. “No matter where they served, all seemed to be profiting considerably more than their wages shows. High level party officials became so rich they could afford to hire personal drivers and bodyguards without declaring the source of financing,” says Jeton Zulfaj, who spent the last two decades in Kosovo focusing on anti-corruption strategies.

In Kosovo, where unemployment reached an alarming figure of 30%, politicians are the richest class in the country. Many big businesses have greatly expanded thanks to politicians’ support, who receive millions in return for “their efforts.”

Decades ago the violent dissolution of the Former Yugoslavia has left a legacy of deep mistrust and animosity between majority and minority ethnicities in the newly-created states that emerged out of it. In Kosovo, the roots of the interethnic conflict between Albanians and Serbs go back deep into history. For the most of the 20th century, Albanians in Kosovo have been subjected to discrimination, intimidation, and even mass expulsion by Yugoslav/Serb authorities.

In this environment, corruption has flourished. According to the corruption index, Albania fell from 83rd to 91st place. Progress was made in tackling petty corruption in the public sector, but much work must still be done, especially on corruption in the judiciary. Gjergj Erebaja, a journalist from Albania, says that “The justice system, including the prosecutors and the courts, are under extreme influence of the political elite. Politicians… use unlimited power of the state to blackmail voters… Large private businesses are, to some extent, an extension of the political system.”

The final cost of corruption is harder to total, but it includes millions in corrupt government spending, in stolen funds, and in missed foreign investments. And this price is always [falling on] the taxpayer, the citizen, who does not receive the quality public services for which they pay.

Transparency International official Cornelia Abel named Serbia as an example of a “captured political system,” citing the excessive influence of its President, Aleksandar Vucic. “Serbia … is becoming a prime example of one person in the position of power influencing everyone else,” she said. Serbia fell by five places on the Corruption Perception Index, from 72 in 2016 to 77 in 2017.

The Business Anti-Corruption Portal, supported by the European Union, states that “Corruption is a problem in Serbia, and the prevalence of bribery exceeds the regional average. Foreign companies should be aware of conflicts of interest within Serbia’s state institutions. Government procurement, natural resource extraction, and the judiciary are especially vulnerable to fraud and embezzlement.”

Montenegro also has made little to no progress in its fight against corruption, and it remains at 64th place. Transparency International experts said that the 2016 alleged coup attempt only “stopped anti-corruption efforts to some extent.” Montenegro is often criticized for not doing enough to tackle organized crime and corruption, with Brussels demanding concrete results in fighting corruption at the high political level as one of the main conditions for the country to join the EU.

The endemic political corruption of the Balkan states is certainly one of the main obstacles which is dramatically slowing the process of integration into the EU. Given, however, that the Balkan states are eager to join the EU, and since the EU is interested in luring them to its orbit and distancing them from Turkey and Russia, both sides need to take specific measures to address the problem of corruption.

The EU is in a strong position to use its leverage by offering investments, loans, and access to the European market, against which neither Russia nor Turkey can compete effectively—nonetheless, they are stopping short of nothing to incorporate them into their sphere of influence. In return, the Balkans should be required to institute political, economic, and social reforms.

The EU should also insist on greater transparency and accountability, which would curtail pervasive corruption by elected officials. To that end, the EU should resume a law enforcement and justice presence not only in Kosovo (which recently ended after ten years), but in all the Balkan states who wish to become EU members.

Civil societies throughout the Balkans have a major role to play by protesting and holding massive rallies and demanding an end to the corruption that has infected all government strata, including the judiciary and law enforcement. Should their respective governments fail to take clear and decisive steps to deal with corruption, the public may have to resort to civil disobedience, which could include labor strikes, student walkouts, and a slowdown by government employees.

Addressing the problem of corruption in the Balkans is central to the EU’s geostrategic interests as well as the Balkans’ future wellbeing within the EU community. The Balkans’ accession to the EU must be seen as a marriage of necessity that will dramatically enhance their collective security while substantially improving the quality of life and respect for human rights throughout the Balkans.