The Polar Bear Expedition: When America Intervened in Russian Affairs

James Carl Nelson is the author of The Polar Bear Expedition: The Heroes of America’s Forgotten Invasion of Russia, 1918-1919(William Morrow, 2019), and three other books about the American military experience in World War One.

The Great War had been over for more than two months when on the frigid morning of January 19, 1919. Lt. Harry Mead peered into the slim, gray light of dawn and saw hundreds of ghostlike figures, armed and dressed in white, skimming the frozen ice of Russia’s Vaga River on skis. They were coming towards the forty-five men of his first platoon of Company A, 339th United States Infantry Regiment.

Soon enough, the Americans were overwhelmed, and as Americans fell left and right,the survivors of the initial assault began a fighting retreat through deep snows and temperatures of minus-fifty; more than half of the platoon would be wiped out at the hands of 1,700 of their Bolshevik counterparts.

The long-anticipated attack by the Reds marked the beginning of the end of a particular episode in U.S. history that few today are aware of:  the intervention into the Russian Civil War by America and its British, French, Polish, and even Italian allies.

As allegations and investigations swirl around the questions of Russian intervention in our 2016 elections, and whether the Republican campaign of now-President Trump actively colluded with agents of Vladimir Putin, it’s worth a look back one hundred years to our own intervention—invasion, if you will—in Russia, if only to add some context to the current air of distrust and enmity that exists between the U.S. and it former Cold War opponent.

While most Americans might point to the post-World War 2 Cold War between east and west as the starting point of antagonism between the two super powers, the story line must in fact be pushed back much farther, back to the summer of 1918.Then-President Woodrow Wilson was agonizing over whether to accede to Allied insistence that the U.S. supply troops for a planned foray into Russia.

The aims of the intervention, as put forward mainly by the British, were twofold:  (1) the reestablishment of the Eastern Front, which the Bolsheviks had quit in March, 1918, leaving Germany free to transfer some eighty divisions to the Western Front; and (2), more grandly, the incitement of a counter-revolution that would throw the Reds out of power and alleviate the nascent “Red threat” that caused some governments in the Western democracies to worry.

Wilson wanted no part of an intervention, but under tremendous pressure he finally agreed in mid-July 1918 to send a single U.S. regiment to northern Russia. His orders were that the Americans were only to guard the tons of materiel that the Allies had sent to Russia during the war, and stay out of the post-revolution turmoil that saw Reds fighting so-called “Whites”—Tsarist loyalists—across Russia.

That regiment was the 339th, part of the 85th Division. Mostly draftees from Michigan and Wisconsin, the men had arrived in England in August and were anticipating a trip across the Channel to France when they were plucked for assignment in Russia.

The regiment sailed for Archangel, Russia in late August of 1918, and arrived at the bustling northern port on September 5. But almost as soon as they arrived, the men were hustled off their transports by their British overseers and sent by train south in the direction of Vologda, and southeast on the wide Dvina River towards Kotlas, hundreds of miles away.

Left behind were some seventy men stricken with or already dead from the flu that had haunted the ships that had carried them to Archangel. Many more—more than 150—Americans would die in battle or from wounds in the coming months.

Living or dead, all were mere pawns in an epic drama that would play out through the coming fall, winter and spring—and well past the November 11, 1918 Armistice that ended World War 1.

Company by company, the men took up posts in isolated positions across a front of four hundred miles, the farthest-flung being Company A, which after seeing duty on the lower Dvina River was went down the Vaga River, a tributary, to a God-forsaken village called Nijni Gora, 250 miles from Archangel. 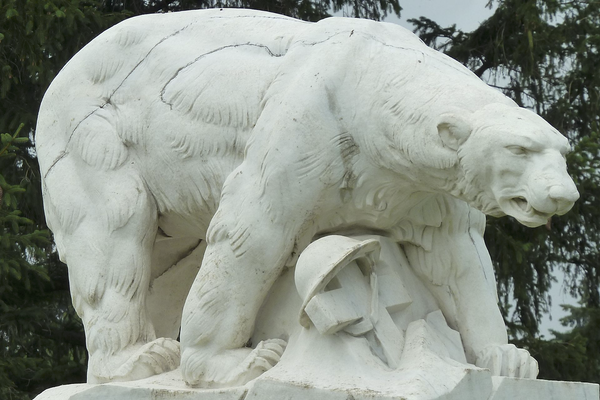 On November 11, ironically, Company B was attacked by hundreds of Bolsheviks—the men called them “Bolos”—at Toulgas on the Dvina. Firing from hastily made blockhouses, the Bolos were finally put at bay after several days of fighting with the help of a single battery of Canadian artillery. But the company would remain there in that isolated spot until March, under constant attack and harassment by the Bolsheviks.

On the railroad, the third battalion struggled through the fall and winter to push south towards Vologda, but never got to within three hundred miles of the city.  Meanwhile men died, and men suffered in the brutal cold—so cold that the men slept with their water-cooled machine guns in an effort to keep them operable.

Meanwhile, the Reds’ minister of war, Leon Trotsky, was building an army of 600,000 men, which he vowed to use to push the invading and slim Allied force into the White Sea. That process began at the farthest Allied base at Nijni Gora, where Company A in the third week of January was routed, and each man subsequently fought for his survival during a two-week retreat through the harsh elements.

By then the main reason for the intervention—the recreation of the Eastern Front—was a non-issue. So, too, was Woodrow Wilson’s stated intent of guarding war materiel from the predations of the Germans.

And still the men—American and Allied—suffered and fought bravely and wondered why they had never been given a single good reason for their being there. As the winter progressed, they wondered even more when they might be withdrawn. 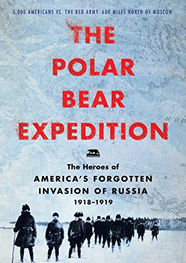 An increasing clamor back home in the U.S. was rising at the same time, and in February Wilson made the decision to pull out—an impossibility, however, until the frozen White Sea broke up. Finally, the Americans began withdrawing across the fronts and shipped from Archangel in early June, followed by the British in September.

The intervention would be quickly forgotten in the U.S., if not by the survivors, by the public in general. Few lessons would be learned from the expedition, and similar mostly unsuccessful invasions—in Vietnam, in Iraq, in Afghanistan—would be undertaken with no look back at our experience in Russia.

But the average Russian has been taught about the intervention, and the average Russian remembers. Though Presidents Richard Nixon and Ronald Reagan would both proclaim separately that Americans and Russians never faced off in battle, the Russians still remember a time when foreign, Western nations interfered in their affairs.