What FDR Can Teach Us About Congress and National Emergencies

Martin Halpern is professor emeritus of history at Henderson State University and the author of UAW Politics in the Cold War Era and Unions, Radicals, and Democratic Presidents: Seeking Social Change in the Twentieth Century. 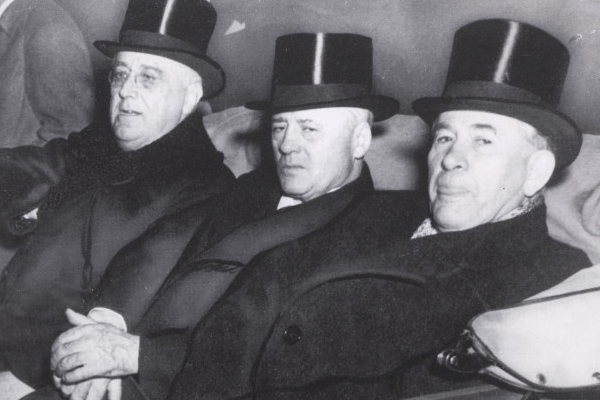 Seventy-five years ago this week, there was a serious conflict between President Franklin Roosevelt and Congress. The United States was at war, indisputably a national emergency. Today we face a serious conflict between President Donald Trump and Congress. President Trump has declared a national emergency in order to spend monies appropriated by Congress for other purposes in order to build a wall between the United States and Mexico. Only Trump’s supporters, a minority of the country, see an emergency. If Trump is not stopped, we will have taken a serious step toward authoritarian government. We may draw some lessons from the conflict between Roosevelt and Congress in 1944 that may be helpful today.

As a follow-up to his call for an Economic Bill of Rights in his January 11, 1944, State of the Union address, Roosevelt had proposed to raise $10.5 billion for the prosecution of the war and domestic needs. The resulting Revenue Act raised only $2.1 billion and included tax cuts and new benefits for bondholders and the airline, lumber, and natural gas industries. On February 22, 1944, Roosevelt issued a veto message, charging that the measure enacted by Congress was “not a tax bill but a tax relief bill providing relief not for the needy but for the greedy.” Although Roosevelt was right in his criticism, the reaction on Capitol Hill was outrage.

The next morning, Senate Majority Leader Alben Barkley of Kentucky, hitherto a close supporter of the president, charged that the president had given a “calculated and deliberate assault upon the legislative integrity of every Member of Congress.” Barkley announced that he would resign as majority leader because he needed to maintain “the approval of my own conscience and my own self-respect.”  He concluded his speech to a packed Senate with a call for action: “if the Congress of the United States has any self-respect yet left, it will override the veto of the President and enact this tax bill into law, his objections to the contrary notwithstanding.” The Senate gave Barkley a standing ovation. The House overrode the president’s veto later that day. The Senate did so the following day, February 24, 1944.

Instead of persisting in his criticism of the Congress, Roosevelt sent Barkley a conciliatory message, hoping that he would not resign and that “your colleagues will not accept your resignation; but if they do, I sincerely hope that they will immediately and unanimously re-elect you.” Shortly before the Senate override of the veto, Barkley resigned and was unanimously reelected majority leader.

An immensely popular president who had been elected three times and would be reelected to a fourth term in less than nine months time, Roosevelt nevertheless knew he needed to work with Congress and respect its authority. Although the media at the time characterized Barkley’s resignation and the Congressional override of Roosevelt’s veto as a crisis, the rift was quickly healed and Roosevelt and the Congress continued to work together on the war emergency. The controversy, it’s true, meant that Roosevelt no longer considered Barkley as a potential running mate in 1944. That was a sacrifice Barkley was willing to make. He later served as vice president under Harry Truman.

What lessons may we draw today from this controversy?  To maintain its role as the holder of “All legislative Powers” of our constitutional government, the Congress should vote to cancel Trump’s emergency declaration as provided by the National Emergencies Act of 1976 and then vote to override his likely veto. Senate Majority leader Mitch McConnell should follow the example of fellow Kentuckian Alben Barkley and support such legislation and an override of a presidential veto. Because the stakes are the survival of representative government, a grass roots movement should make their voices heard to stop the imposition of authoritarian government.