Robert Scott Kellner is a retired English professor who taught at the University of Massachusetts and Texas A&M University. He is the grandson of Friedrich Kellner. He published the diary in its original language in Germany in 2011 and is the editor and translator of the English edition, My Opposition: The Diary of Friedrich Kellner--A German against the Third Reich, published by Cambridge University Press, United Kingdom, 2018. 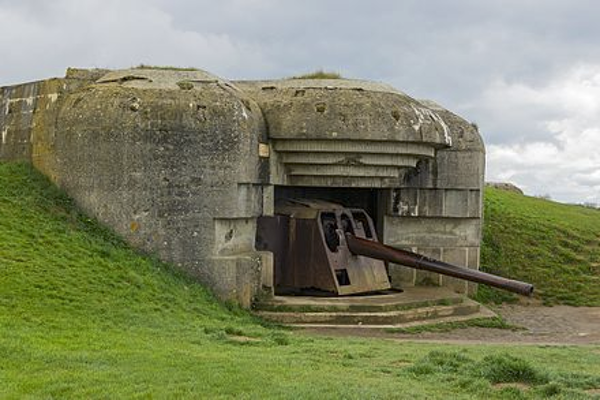 "Monsieur Maginot built a fortified line," noted the German justice inspector Friedrich Kellner in his diary in June 1940, just after Hitler's army burst through the French fortifications. If France really expected to keep its neighbor from storming its territory, he added sardonically, it should have covered every foot of its border with "dynamite, deep pits of hydrochloric acid, traps of the largest extent, trip-wire guns, electrically charged fences -- and with thousands of heavy caliber cannons playing a major role." Water wells in the fields would have to be poisoned, and the more persistent intruders greeted by "machine gunners in swiveling steel towers."

The humiliating failure of the vaunted Maginot Line thrilled the vast majority of Germans, who adored their Führer and supported his ruthless agenda. "The foolish people are intoxicated by the victories," wrote Kellner. He had opposed the Nazis from the beginning. A political organizer for the Social Democrats, he had campaigned against them during the ill-fated Weimar Republic. When Hitler came to power, Kellner moved his family to the small town of Laubach where he found a position as courthouse manager. On September 1, 1939, when the Nazi war machine introduced the world to blitzkrieg, Kellner began to record Nazi crimes and the German people's complicity in Hitler's program of terror. He occasionally forgot himself and gave voice to his feelings and was written up as a "bad influence" by the local Nazi leader. The SS placed him and his wife, Pauline, under surveillance, and only Kellner's position in the courthouse kept them from arbitrary arrest by the Gestapo.

If Adolf Hitler's megalomania had been satisfied after he avenged Germany's WWI defeat by overcoming the Maginot Line, he might not have had to create one of his own. But two years later Hitler was anxiously constructing a line of defense to secure his ill-gotten gains. He promised that his "Atlantic Wall" -- thousands of fortifications of concrete and steel stretching over 1,500 miles -- would keep out the hordes. Should anyone miraculously make it through the Wall, declared a boastful Hitler to laughter and thunderous applause from his audience, "It will only be a matter of luck if he remains nine hours."

Joseph Goebbels, the Minister of Propaganda, contributed with special presentations in the papers and over the radio, calling the Wall "the most enormous protective cordon of all times." In weekly newsreels, a narrator described the panoramas of the fortifications: "We admire the many and confounding systems of the trenches, crossbars and barricades, of the bunkers and machine gun emplacements, the threatening, elongated muzzles of the super-heavy cannons." To those who might dare to test the Wall, the narrator added, "We understand the nervous mood on the British island, where they hope in vain to grate the German people's nerves by shouting about invasion."

"The Atlantic Wall is presently a favorite topic in the press and on the radio for rousing the people," wrote Kellner. "But it ranks along with the Maginot Line that made France believe it was safe." He was unimpressed when Hitler assigned Germany's most popular military leader to command the project. "General Field Marshal Rommel, the Great Retreater, who at one time had 'the gates of Egypt' in his hand, is being brought out of mothballs," said Kellner. "He is the darling of the propaganda machine, and his blemished fame will fill the forgetful ones with hope." 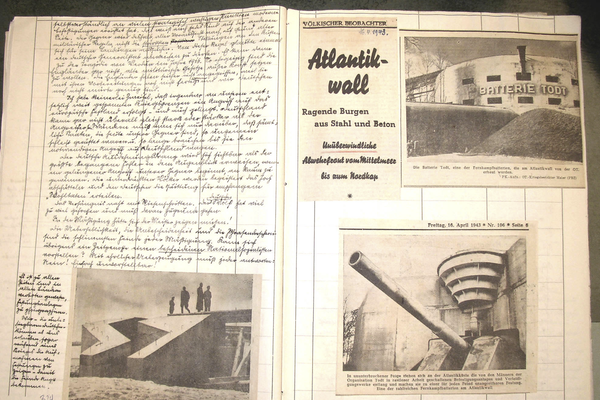 A photo of Friedrich Kellner's diary, courtesy of the author.

Kellner was certain neither Rommel nor his battalions nor the fabled Atlantic Wall would repel what was coming. The invaders might not even bother with the Wall, he suggested. There were other borders they could test. If they entered Germany from elsewhere, the Wall would prove a farce.

"Besides," Kellner wrote, "they can fly over it."

In any case, Kellner was tired of the boasting and bluster in Germany, and the procrastination of the Allies, and he wrote, "One would like to proclaim, 'Let us finally see the action.' Then the proof will be furnished whether the legendary Atlantic Wall is to be breached or not."

That day of action arrived three weeks later, on June 6, 1944. "Finally!" Kellner wrote in capital letters at the top of that diary entry. "With the utmost inner excitement we heard the announcement today landings were made on the northern French coast."

The Wall fell, and rightly so in the diarist's mind. "The human community does not end at border crossings artificially placed within a country," said the Social Democrat Friedrich Kellner, "but has to embrace everything that carries a human face."

For more on Friedrich Kellner, read My Opposition: 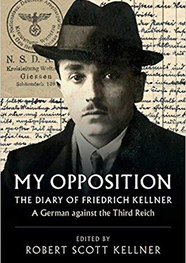