A half-century before the hashtag, artists were on the front lines of #MeToo

Vivien G. Fryd is a Professor of Art History at Vanderbilt University. 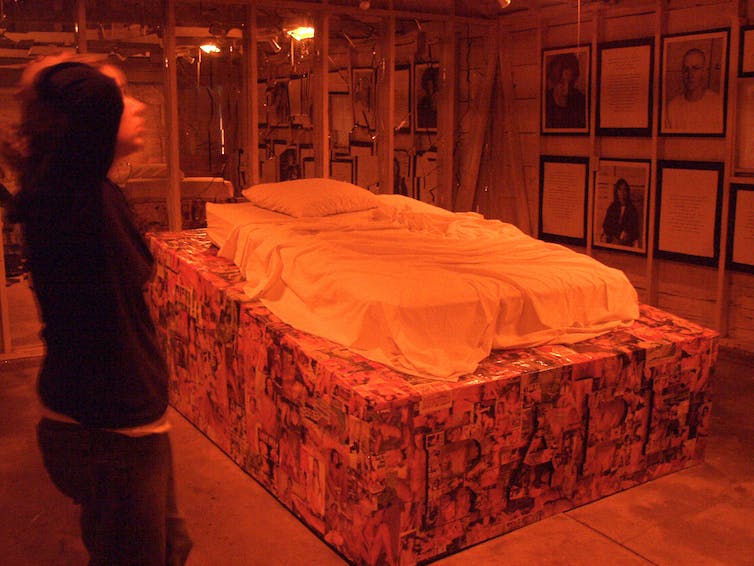 The #MeToo movement has had a sweeping effect on politics, organized religion, educational institutions, Hollywood, sports and the military.

The cultural prominence of rape and sexual assault might be new. Efforts to bring attention to the issue, however, are not.

Beginning in the 1970s, a group of female artists in the U.S. started confronting rape, incest and sexual assault through performances, videos, quilts and other nontraditional media.

By tackling a taboo subject, they were at the forefront of raising public awareness of these issues. In my new book “Against Our Will: Sexual Trauma in American Art Since 1970,” I detail how their relentless efforts to end the silence surrounding sexual violence against women reverberates in the #MeToo movement today.

The ‘heroic’ rapes of the Renaissance

When these feminist artists emerged, they sought to counter what art historians call “the heroic rape tradition of Western art.”

Beginning in the Renaissance, this tradition involved artists’ rendering assault, rape and murder against women with a patina of beauty and heroism that masked the reality of the violence. For example, Titian’s “Rape of Europa” depicts the ancient Greek myth in which Zeus turned himself into a bull to abduct Europa and bring her to Crete. There, he revealed his identity, raped her and fathered three children.

In Titian’s rendering, he depicted Europa as an eroticized woman who seems to writhe in pleasure on the bull’s back as they fly into the sky. The painting’s playful cupids, dynamic composition and rich colors belie the fact that Zeus is about to rape Europa. 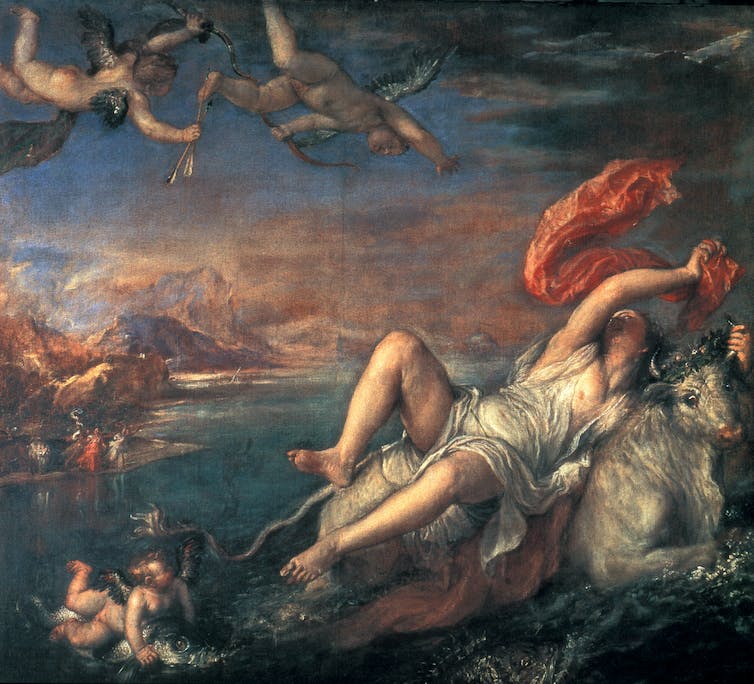 In Correggio’s “Jupiter and Io,” Jupiter, the Roman king of the gods, disguises himself as a cloud as he embraces the nymph, who has no idea that it’s actually Jupiter who’s seducing her. The lecherous act is depicted erotically, and Io seems to be enjoying it.

Over time, many scholars and critics, mostly male, have praised these works for their dramatic compositions, enticing colors and idealized figures. Little consideration was given to the violent sexual subject matter.

But by the 1980s, some art historians, mostly women, expressed unease about the sexually violent content of these revered works. They pointed out that representations of rape – even within the context of mythological, biblical and historical subject matter – seemed to glorify the act.

Why, they wondered, wasn’t anyone talking about the fact that this violent subject matter was so prevalent, accepted and praised? Why hadn’t anyone questioned it? Was it indicative of a larger problem beyond the world of art?

Two artists, Suzanne Lacy and Leslie Labowitz, were at the forefront of this movement.

They produced at least seven large-scale and complex public performances in Los Angeles that helped redefine rape as a crime of aggression and act of female subjugation.

One was a 1977 work titled “Three Weeks in May.” As part of the series of performances and installations, Lacy marked up two bright yellow municipal maps of Los Angeles located in City Mall Plaza. On the first map she stenciled the word “rape” in four-inch red letters over every location where a woman had been raped over a three-week period. She updated the map daily, using data from the Los Angeles Police Department. 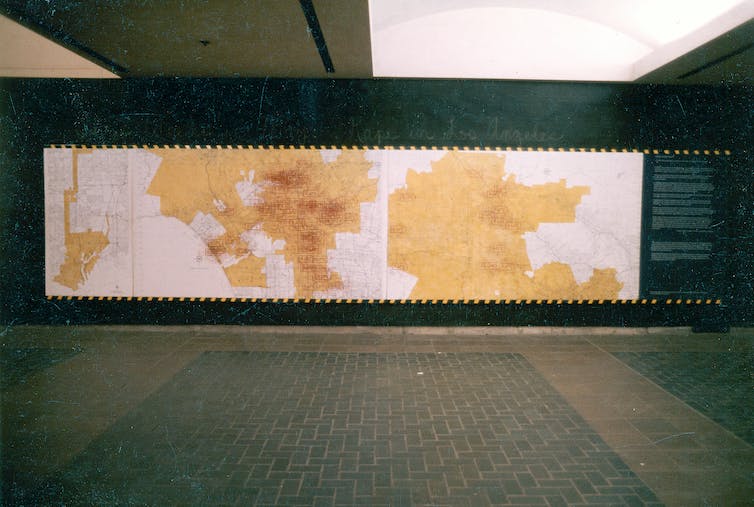 On the second map, she highlighted the locations of prevention centers, rape hotlines, hospital emergency rooms, and crisis and counseling centers.

Passersby checking out the maps – whether they were City Hall employees, tourists or shoppers – were instantly exposed to the overwhelming number of rapes that had occurred in the city, along with the resources available to assist victims.

Over the years, Lacy, Labowitz and other artists continued to reiterate these themes in their work.

Sue Coe’s 1983 painting “Woman Walks into Bar – Is Raped by Four Men on the Pool Table – While 20 Watch” condemned the fact that four men brutally and publicly gang-raped a 21-year-old woman while patrons in a New Bedford, Massachusetts, tavern looked on and did nothing. 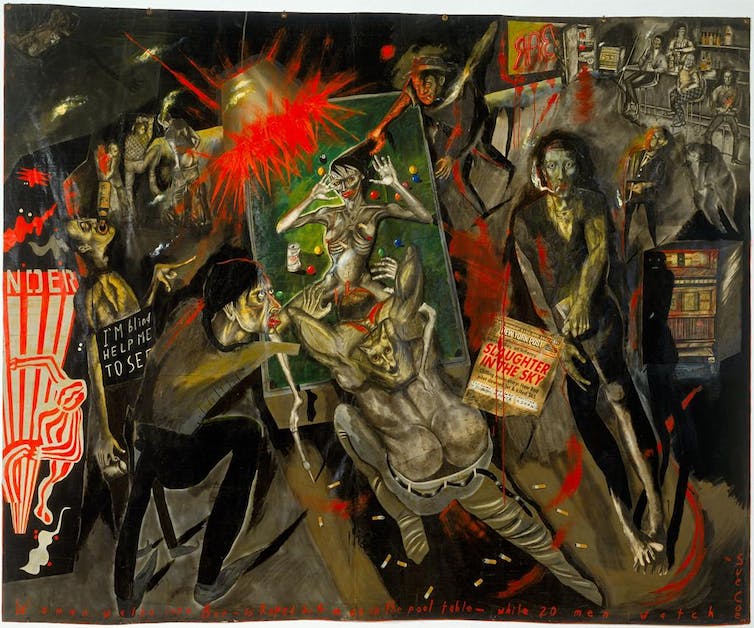 The 2002 installation “Rape Garage,” by Stefanie Bruser, Josh Edwards, Katie Grone and Lindsey Lee, was part of the “At Home” project at Western Kentucky University, which was facilitated by feminist artist Judy Chicago and her husband, Donald Woodman. Participants constructed installations that explored the themes of womanhood and manhood in different rooms of a house in Kentucky. As its name suggests, “Rape Garage” was an installation in the house’s garage. It highlighted the issue of rape by displaying statistics and posting first-person narratives of sexual trauma. It suggested that pornography encouraged rape and even included the fact that a man could be raped by a woman.

Once again, Lacy created a rape map, this time installing it outside of the Los Angeles Police Department’s Deaton Auditorium.

Although the map indicated that the number of rapes had decreased in the last 35 years, it showed that sexual violence remained a problem, especially in high schools and on college campuses. Viewers were encouraged to spread awareness by tweeting or blogging about the work.

Other artists continued to follow their lead. Most notably, Emma Sulkowicz, a visual arts major at Columbia University, became a national figure for a piece she titled “Mattress Performance: Carry That Weight,” which some compared to the 1970s anti-rape performances.

During her sophomore year, Sulkowicz had been raped. After a university adjudicating committee found her assailant not guilty, she decided she couldn’t stay silent.

Over an eight-month period during her senior year, she carried a mattress similar to the one on which she had been raped to all of her classes and even her graduation. Other students joined her at Columbia University and other colleges to further protest against rape on college campuses.

The rest of the country joins forces

These clarion calls have been around for decades, but they were lonely voices that often went unheeded or unheard. Then, in 2016, things started to change. More and more women – and men – began to speak out to end the silence and demand justice.

In 2018, Judge Rosemary Aquilina sentenced ex-USA Gymnastics doctor Larry Nassar to up to 175 years in prison for his serial sexual abuse of female minors and young adults.

“It stops now,” Aquilina proclaimed. “Speak out like these survivors, become part of the army.”

The more than 150 female athletes’ voices heard on television and radio and read in newspapers had become part of that army. They had joined the hundreds of victims of the Catholic Church, Hollywood stars, bosses, journalists and politicians who have stepped forward since the dawn of the #MeToo movement.

But let’s not forget the feminist artists who were on the front lines – who bravely spoke out to end the silence when few addressed the taboo topics about domestic violence, rape and incest.