How Hollywood has been fooled by Robert F. Kennedy assassination conspiracy theorists

Mel Ayton is the author of numerous history books and articles. A new edition of Mel Ayton’s 2007 book The Forgotten Terrorist – Sirhan Sirhan and the Assassination of Robert F Kennedy will be published in May 2019 by the University of Nebraska Press/Potomac Books. The new edition includes a Foreword by Harvard Professor Emeritus Alan Dershowitz. 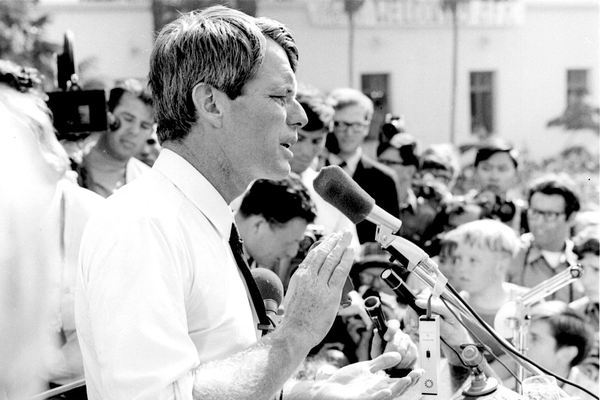 Renewed interest in the Robert Kennedy assassination flourished on the 50th anniversary of his assassination in 2018 and the following year with the publication of two books about the assassination, A Lie Too Big to Fail by Lisa Pease and The Assassination of Robert F. Kennedy by Tim Tate and Brad Johnson. Both books allege RFK’s assassin was a hypnotised assassin manipulated by the CIA and had no real motive thus innocent of the crime.(1)

The falsehoods promoted by Pease, Tate and Johnson – a ‘girl in a polka dot dress’ controlled Sirhan, misinterpretations of the ballistics evidence, the creation of suspicion around LAPD crime scene mistakes, multiple teams of CIA-controlled assassins skulking around the Los Angeles Ambassador Hotel, allegations that Sirhan was never close enough to RFK to fire the fatal shot, allegations of Sirhan firing ‘blanks’, accusations against  an innocent security guard Thane Eugene Cesar - have all been addressed and debunked over the years (most recently here: https://historynewsnetwork.org/article/169208  and here:  https://www.moldea.com/RFKcase.html)

The authors of the books were given moral support of late by a group of Hollywood celebrities including Oliver Stone, Alec Baldwin, Martin Sheen, Rob Reiner, David Crosby, Mort Sahl, and two Kennedy family members -  Robert F. Kennedy Jr.and Kathleen Kennedy Townsend. Following publicity about the books the group called for a new investigation of the assassination. (The group also alleged that other political assassinations of the 1960s, JFK, MLK and Malcolm X, involved government malfeasance and cover-up and wanted the government to also re-investigate those crimes). (2)

It is no mystery why some Hollywood celebrities support the notion of an innocent Palestinian refugee railroaded into a notorious murder case. Many in Hollywood have endorsed and embraced the Palestinian cause mimicking the American left’s decades-old support. Unable to gauge Sirhan’s true character by reading the recent conspiracy books they would naturally assume Sirhan mysteriously acted without a motive.

Although many falsehoods about the case have been debunked over the years this crucialexamination of Sirhan’s motives has been largely ignored or overlooked by the mainstream media – motives which convincingly and conclusively show that not only was Sirhan a political fanatic but he also embraced the concept of violent solutions to political problems.

Although some acquaintances of Sirhan said he was ‘pleasant and well-mannered’ and ‘non-political’ it is not the lasting impressions of those who knew him best. His brother Munir said Sirhan was ‘stubborn’ and had ‘tantrums’(5)William A. Spaniard, a twenty-four-year-old Pasadena friend of Sirhan’s, said the young Palestinian was “a taciturn individual.”(6) Fellow students characterized Sirhan as not only ‘taciturn’ but also  ‘surly’, ‘hard to get to know’, ‘withdrawn and alone’. (7) One of his professors saw Sirhan and another student have an argument that, “almost became a fist fight”. He said Sirhan had, “an almost uncontrollable temper”. (8)

Sirhan also revealed the violent side of his character when he was employed as an exercise boy/ trainee jockey. According to two exercise girls who worked at the Grande Vista Ranch Sirhan treated the horses ‘cruelly’. Del Mar Race Track foreman Larry Peters sawSirhan kick a horse in the belly and after he remonstrated with him he was taken aback at the vitriol which emanated from the young employee. Peters said Sirhan's temper had been unusually violent when he was told he would never become a jockey. (9)

Additionally, a horse trainer at the Grande Vista Ranchranch saw Sirhan mistreat a horse, “…kicking and hitting it with his fists”. Sirhan, he said, “…was in a rage of temper”. By way of explanation Sirhan told him the horse “provoked him”. (10) In fact, Sirhan had used this excuse at his trial when he testified that Robert Kennedy, by his support of Israel, had ‘provoked’ him which led to his decision to assassinate the senator. (11)

As a young adult, Sirhan sought meaning to his increasingly hopeless life by embracing anti-Semitism, anti-Americanism and Palestinian nationalism. Sirhan’s parents taught him the Jews were ‘evil’ and ‘stole their home’. They also taught him to hate, despise and fear Jews. As a part-time gardener Sirhan came to hate the Jews whose gardens he tended. (12)

Amongst the many descriptions of Sirhan by those who knew him well include his friends Walter Crowe, Lou Shelby and John and Patricia Strathmann, as well as his former boss John Weidner. They all agreed that Sirhan hated Jews and been intense and emotional whenever he discussed the Arab-Israeli conflict. They all agreed he was vehemently critical of American foreign policy regarding Israel.

Walter Crowe had known Sirhan from the time they were young adults and also during a short period of time when Sirhan was a Pasadena College student. Crowe said Sirhan was virulently anti-Semitic and professed hatred for the Jews and the state of Israel. He believed Sirhan’s mother Mary propagated these views to Sirhan. (13)

Lou Shelby, the Lebanese-American owner of the Fez Supper Club in Hollywood, knew the Sirhan family intimately. He described Sirhan as, “intensely nationalistic with regard to his Arab identity”. According to Shelby, “We had a really big argument on Middle East politics...we switched back and forth between Arabic and English. Sirhan’s outlook was completely Arab nationalist - the Arabs were in the right and had made no mistakes”. (14)

John and Patricia Strathmann had been ‘good friends’ with Sirhan since High School. According to John, Sirhan was an admirer of Hitler, especially his treatment of the Jews, and was impressed with Hitler’s Mein Kampf. John also said Sirhan became ‘intense’ and ‘mad’ about the Arab/Israeli Six Day War. Patricia said Sirhan became, “burning mad . . . furious” about the war. (15)

Sirhan discussed politics, religion, and philosophy with his boss, John Weidner, a committed Christian.Weidner was honoured by Israel for his heroism in saving more than 1,000 people from the Nazis.Sirhan worked for Weidner from September 1967 to March 1968. According to Weidner Sirhan, ‘hated Jews’. (16)

Sirhan was not only anti-Semitic in his political views but believed in violent action as a political tool. He admired the Black Panthers and even wanted to join their organisation. According to his brother Munir, Sirhan also became enamoured with the Black Muslims, who “were like him culturally”. Sirhan attended the Black Muslim Temple in Central Los Angeles until he was told he could not join the organization because he was not black. (17)

The notion that Sirhan never held any animus towards Robert Kennedy is also entirely without foundation as friends and Sirhan himself have revealed. Sirhan said he believed Robert Kennedy listened to the Jews, and he saw the senator as having sold out to them. (18)

Sirhan also expressed hatred for Robert Kennedy to John Shear, an assistant to trainer Gordon Bowsher at the Santa Anita Racetrack. Shear recalled that the newly hired Sirhan heard a co-worker read aloud a newspaper account of Robert Kennedy recommending the allocation of arms to Israel. “Sol (Sirhan) just went crazy,” Shear said. “He was normally very quiet, but he just went into a rage when he heard the story.” (19)

Sirhan thought RFK would be, “like his brother,” the president, and help the Arabs but, “Hell, he f….. up. That’s all he did. . .. He asked for it. He should have been smarter than that. You know, the Arabs had emotions. He knew how they felt about it. But, hell, he didn’t have to come out right at the f…… time when the Arab-Israeli war erupted. Oh! I couldn’t take it! I couldn’t take it!” (20)

Despite protestations to the contrary Sirhan had clear and defined motives in wanting to murder Robert F. Kennedy and the hatred that spewed forth from his gun can ultimately be traced back to one cause - Palestinian nationalism. 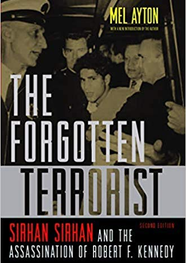