Jerome Braun has been a Visiting Scholar at Loyola University, Chicago, Dept. of Sociology since 2014. He writes in interdisciplinary social science, with some emphasis on culture and personality and on democracy from a cross-cultural perspective.  He also writes on labor problems and on what he calls pragmatic critical theory.  He was a Research Student in Industrial Relations at the London School of Economics, which resulted in his book The Humanized Workplace: A Psychological, Historical, and Practical Perspective (Praeger, 1995). His most recent book is Democratic Culture and Moral Character: A Study in Culture and Personality (Springer, 2013). 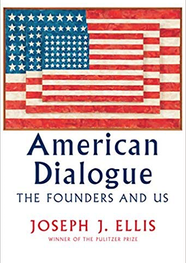 America’s founders researched and valued the lessons of history. This is evident in The Federalist Papers, that series of newspaper columns written by Alexander Hamilton, James Madison, and John Jay for New York City newspapers that justified the new American Constitution and appealed for its ratification.  Since it was common for copies of newspapers to be kept in taverns for reading by patrons, it should not be assumed that they were read only in elite circles.

Are we as thoughtful as that generation?  In his latest book, Joseph J. Ellis, formerly the Ford Foundation Professor of History at Mount Holyoke College, author of many books about that early period of American history, argues that founding period offers many lessons for present-day America.  Yet, with all its many virtues, no one will mistake it for the equivalent in our day of The Federalist Papers.

Like so many modern books on history, this book is driven by a concern for personality and politics.  Ellis argues that the approaches to political issues of Thomas Jefferson, John Adams, James Madison, and George Washington can have lessons for modern politics. Though this book focuses on these people’s lives and gives little attention to the societies that surrounded them, Ellis offers little to evaluate what each man could have done differently politically or what mistakes they made that modern Americans should try to avoid, except in the most general sense of learning from their flaws in character. While personality and judgment are emphasized, Ellis does not really analyze how leadership functions in our society to foster discussions of policy.

For example, Ellis argues that Thomas Jefferson played an active role in trying to limit slavery, especially in the new territories but also in his native Virginia. Jefferson was rebuffed and although he still opposed slavery, he was temperamentally uncomfortable with being a center of controversy if he could avoid it.  So he just gave up.  In his old age he opposed abolitionist schemes in the North because he felt that abolitionists would seek to produce mixed race communities that he felt were not feasible. In his view, abolitionism would just exacerbate sectionalism.  The author claims the racism of Jefferson illuminates present-day racism. But the author does not explain if he thinks racism is diminishing or increasing nor adequately explain terms like “structural racism.”

His discussions of John Adams, James Madison, and George Washington follow the same pattern, discussing their personalities more than the choices the nation faced, then as now.

For example, in retirement, Thomas Jefferson and John Adams exchanged friendly letters with each other that rebuilt their friendship that had become frayed during their earlier period as political rivals. In analyzing these exchanges, Ellis emphasized the temperamental differences between the two, the naïve optimism of Jefferson (except regarding slavery of course) and the fearful pessimism of Adams.

Regarding “Our Gilded Age” he provides a quite good summary on the circumstances that led to quite severe maldistribution of income, not only in the United States but in places with similar economies like Europe.   But by limiting intellectual discussion of how to deal with this state of affairs to a recapitulation of the debate between John Adams and Thomas Jefferson, or in broader terms between the Federalists who favored a strong federal government, and the anti-Federalists who favored a weak federal government, what is left out is much detail about what particular actions would be useful at both the local and nationwide levels.  Instead the general mythology that all of American history is nothing more than a replaying of the debates between the Federalists and the anti-Federalists is reinforced.

The author portrays James Madison as a skillful politician and highlights his role in organizing the Constitutional Convention and the ratifying conventions that followed. Madison changed his political alliances over time, moving away from the Federalist party and joining Thomas Jefferson when he felt that the Federalist administration became arrogant and even abusive.  More than John Adams, and even more than Thomas Jefferson, James Madison reacted to circumstances and changed his opinions. Ellis argues that Madison’s political skills clarifies what the founding fathers considered the original intent of the Constitution. Ellis really shows that Madison had good political instincts but his philosophy of government remains unclear.

Ellis seems to admire George Washington most of all.   Ellis details how he sought to conduct foreign affairs in an honorable and reasonable fashion. For example, Washington  negotiated the Treaty of New York (1790) with the Creek Nation that would transfer western Georgia, northern Florida, southern Tennessee, and most of Alabama to the Creek Nation.  Instead, a flood of settlers on the Georgian frontier refused to be bound by this treaty and the legislature of Georgia rejected the treaty.  Nonetheless, Ellis uses this example to argue George Washington had the temperament to be honorable in foreign negotiations that many politicians throughout American history lacked.   He illustrates this by arguing American foreign policy after the fall of the Soviet Union has been characterized by half-baked moral crusades against greatly exaggerated threats. This claim seemingly undercuts his argument of the worthiness of our foreign policy establishment.

These are all interesting stories, but with few revelations and only very general lessons for the present, Ellis hopes that from Thomas Jefferson we can learn lessons on American racism, from John Adams lessons on economic inequality, from James Madison lessons on understanding constitutional laws, and from George Washington lessons on foreign policy.  Yet mostly what we have learned is that a leader should be thoughtful and gracious, and should understand the many ramifications of the problems under discussion. Also, leaders tend to be limited by their own prejudices, and the prejudices of their times.   Even when we share the values of these Founding Fathers, and when we don’t, their policy options are not necessarily the same as our policy options.  World trade, the threat of international war, the ecological crisis and automation in the workplace are all issues that do not have their 18th century equivalents. Yes, this book is a start, an enjoyable start, to help guide citizens in their future political decisions.  But these decisions require policy choices that cannot be handled merely by stories about the  Founding Fathers.  Nevertheless, we can take away good lessons especially on personal character from this start that Ellis provides.