Dirk Langeveld is the author of The Artful Dodger: The 20-Year History of World War I Draft Dodger Grover Cleveland Bergdoll. He also writes a blog on political scandals in U.S. history entitled The Downfall Dictionary. 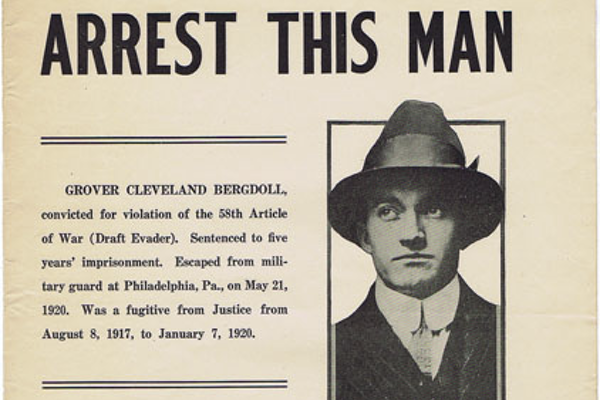 A few months before the start of World War II, a man identified as Bennet Nash boarded the German passenger liner Bremen in Hamburg. Somewhere in the middle of the Atlantic, on the advice of his attorney, he tore up his passport and threw the pieces overboard. The document was a fake, the name borrowed from a star in the Big Dipper.

When the Bremen arrived in New York on the afternoon of May 25, 1939, a Coast Guard cutter met the vessel before it docked. A group of immigration officials came aboard and found “Nash” loitering in the smoking lounge. When asked for his identification, the man replied, “I have no passport. I am Mr. Bergdoll.”

Bergdoll’s case shows the surprising longevity of the jingorism that roiled the United States during the First World War. Following the U.S. entry into the war in 1917, the conflict had been framed as a noble endeavor to safeguard democracy and liberty. Those who disagreed with this rationale were roundly shouted down or denounced as traitorsandthe Sedition Act of 1918 crackeddown on dissenters.

But two decades later, public opinion in the United States had veered strongly toward isolation. The rise of dictatorships overseas had undermined the rationale for the First World War; it seemed like the war had not made the world safe for democracy, but only paved the way for brutal regimes. Congress passed Neutrality Acts aimed at keeping the nation from becoming entangled in the same situations that had led the United States to declare war on the Central Powers in 1917.

But while these attitudes reflected a growing disdain for the motives behind World War I, few expressed sympathy for a man who had willfully avoided service in this conflict. Bergdoll’s sensational case remained in the headlines for roughly two decades, and veterans’ groups never ceased their demand that he be brought home to face justice.

Bergdoll’s fame, and later infamy, was initially confined to his hometown of Philadelphia. He was born into a wealthy brewing family, dabbled in auto racing, and became one of just 119 people to train at the Wright Brothers’ flying school in Ohio. He purchased a Model B aircraftand regularly usedit to perform aerial spectacles for adoring crowds. In 1912, he became the first person to fly from Philadelphia to Atlantic City.

While he earned praise for his aviation achievements, Bergdoll was frequently denounced for his behavior on the ground. He was once accused of assaulting a police officerand spent three months in jail in 1913 for causing a serious car accident. He briefly attended the University of Philadelphia, but was thrown out after publishing an offensive newspaper. His own brother tried unsuccessfully to have him declared insane in 1915.

This publicity, both good and bad, made Bergdoll a more recognizable figure in Philadelphia when he was charged with evading the World War I draft. Although he registered for conscription as required, he failed to show up for an appointment with his local draft board. In August 1918, he was automatically inducted into the military and then immediately declared a deserter. 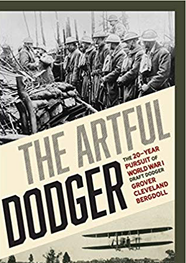 The case gained national attention after two sensational events in 1920. The first came on January 7, when Bergdoll was captured while visiting his home. Officers searching the stately mansion first had to pacify Bergdoll’s mother who was armed with a pistol and blackjack. They discovered Bergdoll hiding in a window seat and transported him to the Army’s disciplinary barracks on Governors Island in New York. At a subsequent court-martial, he was convicted of desertion and sentenced to five years’ imprisonment.

Four months later, Bergdoll told his attorneys that he had buried a considerable amount of gold in Maryland while in hiding. He worried that someone else might stumble upon the treasure while he was incarcerated and wanted to recover it. His attorneys struck a deal with military officials where he would be temporarily released, under guard, for a trip to the site where the gold was purportedly hidden.

The expedition was so poorly managed that it would spark a congressional investigation. To keep him from looking too conspicuous, Bergdoll was not handcuffed and wore a uniform virtually identical to that of the two sergeants guarding him. The party also stopped at Bergdoll’s home in Philadelphia instead of proceeding directly to Maryland.

On May 21, Bergdoll gave his guards the slip and fled in one of his vehicles. The strange circumstances of the escape again launched Bergdoll into the spotlight. The public’s ire would only grow more intense when it was found that the fugitive had managed to make his way to Germany, taking up residence in a hotel owned by an uncle.

Since the Senate had not ratified the Versailles Treaty, the United States was still formally at war with Germany (a separate peace would be concluded in 1921). To many, especially veterans who recently fought German soldiers, Bergdoll’s offense was no longer simply a matter of cowardice; he was now denounced as a traitor to his country.

This rage was at its peak in the first few years after Bergdoll’s escape. On two occasions, in 1921 and 1923, American soldiers stationed in Europe tried unsuccessfully to kidnap the fugitive. During the inquiry into Bergdoll’s escape, one congressman became so incensed during questioning of one of Bergdoll’s brothers that he nearly drew a pistol on the witness.

The American Legion and other veterans groups routinely demanded that the government do more to bring Grover back to the United States. Occasionally, sentiments against Bergdoll hit enough of a fever pitch that a group or official would demand that he change his name, or that he only be referred to as “G.C.,” to avoid disparaging the President for whom he was named. Bergdoll’s mother pointed out during her congressional testimony that President Grover Cleveland had paid a substitute to serve in his place during the Civil War, but it did little to dampen the outcryagainst the President’s namesake. The efforts had a certain resemblance to the more ridiculous campaigns to omit any references to Germany during World War I, such as renaming German measles “liberty measles.”

The outrage had faded considerably by the spring of 1939, when Bergdoll announced that he intended to return to the United States and surrender to military authorities. Some people even opined that his only crime was having the foresight to realize that World War I would not be a war to end wars. “Any coward can fall into a draft line and march off to a foreign slaughter,” two women wrote to the Milwaukee Journal in April. “Only a real hero can resist and fight against mob hysteria as did Bergdoll. Anyone can follow the wild mob but few have the grit and real patriotism to oppose the bloodthirsty mob.”

But the harsher, jingoistic attitudes that swept the nation during the war had not died out entirely. In the House of Representatives, Forest A. Harness introduced legislation aimed to bar Bergdoll from entering the country. The Indiana Republican, who had served in the infantry and suffered combat wounds in World War I, introduced a bill establishing that any deserter who had fled to a foreign country to escape punishment should not be readmitted into the United States.

Bergdoll’s attorney, Harry Weinberger, thought the bill was doomed to failsince it was a bill of attainder and ex post facto law - both of which are forbidden under the Constitution. But the disdain for Bergdoll trumped this concern. To Weinberger’s alarm, the bill sailed through committee and passed unanimously in a vote before the full membership of the House.

The vote set up a dramatic confrontation between Harness and Weinberger in a Senate committee hearing as the Bremen neared New York. If Harness prevailed, his bill would be given priority and put to the vote in Senate; if it passed, a likely possibility, Bergdoll would be turned away at Ellis Island and sent back to Germany.

The argument put forth by Harness was little more than invective against Bergdoll, suggesting that he was an unsavory specimen who shouldn’t be allowed to live in the United States. Claiming the fugitive had effectively committed treason, he suggested that Bergdoll only wanted to come home because Hitler’s regime was interfering with his lavish lifestyle. Harness even suggested that Bergdoll might have personally irritated the Fuhrer and that he was trying to escape punishment at the hands of Hitler’s goons. Relishing the fantasy, he declared, “As loathsome and revolting as are the Gestapo methods of Hitler, this might be an occasion where we could almost view them with tolerance.”

Weinberger framed the matter differently, saying the patriotic zeal of people like Harness was threatening the very democracy they purported to protect. He warned that the bill would set a dangerous precedent, especially in light of the fascist dictatorships in Europe, of allowing Congress to strip the rights of citizenship from anyone who happened to rankle the government. “The question of the passage of the Harness bill is greater than Bergdoll or any individual,” said Weinberger. “It goes to the fundamentals of American democracy and liberty. It is the first possible step to establish dictatorship by ex post facto laws and bills of attainder.”

Cooler heads prevailed, and the Senate committee opted not to fast-track the legislation. A second court-martial proceeding ordered Grover to serve the remainder of his original sentence plus three years for his escape, bringing the long saga of his case to a somewhat anticlimactic conclusion.

Bergdoll was hardly the only person who had avoided the World War I draft. He was just one of 337,649 men who had been declared guilty of the offense; about 161,000 of this group would never face punishment. Most draft evasion cases were resolved quietly, with little outcry from the public.

But none of these other offenders had attracted such widespread attention for their crimes. Bergdoll’s wealthy status opened him up to accusations that he had only managed to avoid justice because of his deep pockets. He gave varying reasons for his decision not to serve, limiting any sympathy he may have earned if he had provided a consistent reason for not joining the military. Further, he was frequently portrayed as being a waggish, boastful, and otherwise unpleasant person.

All of these factors combined to make Bergdoll’s case a lightning rod for lingering jingoism after World War I. Although it presented an extreme case, the Bergdoll saga demonstrates how the sentiments that had brought about “liberty measles” in 1917 were still alive and well more than two decades later.