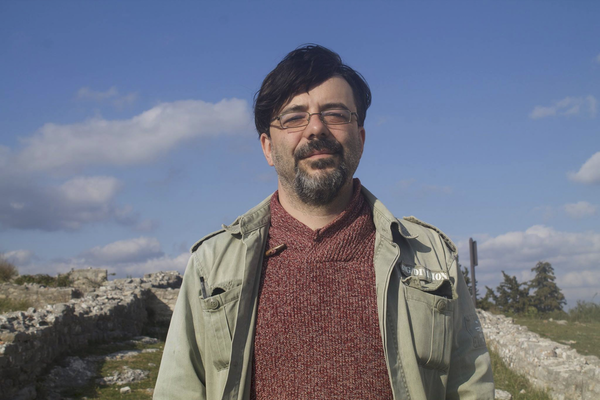 Danijel Dzino is a Lecturer in the Departments of Ancient History and International Studies (Croatian Studies) and a member of the Ancient Cultures Research Centreat Macquarie University. Danijel was born within the ancient borders of the Roman civitas Daesitiatum, in provincia Dalmatia. He received his PhD in Classics at the University of Adelaide. He was a Visiting Research Fellow at the University of Adelaide until moving to Macquarie University to start work on his ARC postdoctoral grant. He is the author of three books, among them, Becoming Slav, Becoming Croat: Identity Transformations in Post-Roman Dalmatia(2010) and Illyricum and Roman Politics 229 BC - AD 68 (2010).

It is very difficult to find the time for reading. Do not get me wrong – I read all the time – but my reading consists of mining for useful information or interesting opinions which could be used in research, rather than reading the book from cover to cover. The last book I can remember that I read from cover to cover was Chris Wickham’s Framing the Early Middle Ages: Europe and the Mediterranean, 400-800.

There are a few. Your readers would probably be familiar with the Mémoires d'Hadrien by Marguerite Yourcenar. However, my favorite history books were, as far as I know, never translated from Croatian into English. That is Ivan Aralica’s The Morlak Trilogy (Travel Without Dream, Souls of the Slaves,The Builder of Inns) from the 1980s. These three books describe fictional individual destinies of the people living in the Early Modern frontier-zone between the Venetian Republic, Ottoman and Habsburg Empires in modern Dalmatia, Herzegovina and Bosnia. I also like pseudo-historical fantasy like Lord of the Rings or The Song of Ice and Fire.

I wanted to be botanist first, but later in life found a way to connect my obsession of Dalmatia, where I spent summer holidays as a kid and teenager, with my professional interests. Where I was born (Sarajevo in Bosnia and Herzegovina), the ancient past is usually well-hidden underground. The medieval past rarely makes an appearance in the places which are usually difficult to access, while the earliest period visible to the observer is the Ottoman era. However, in Dalmatia, ancient, medieval and the early modern past are inextricably intertwined, and visible on every corner. Walking through the Diocletian’s palace in Split, or the Old Town Zadar, for example, provides a unique experience of the past as an integrated multi-dimensional entity which still impacts the present in very particular ways.

Patience, persistence, focus, and the capability to process huge amounts of information. The historian must be conservative and innovative at the same time by respecting the work of past scholars but also daring to see the things that predecessors were not able to see.

The most rewarding experience was the development of my undergraduate unit Archaeology of Dalmatia, which dealt with the Dalmatian (in a sense of the Roman province) past and material record from the Iron Ages to High Medieval era.

My hope is that history preserves its dignity – as a university subject but also as a field of research. Modern Western universities in Anglophone countries connect everything with money. The imperative is to have more students and win more research grants. For that reason, it is necessary to keep the student numbers at any cost, simplify the curriculum, make the students happy and well-entertained, which in my opinion underestimates intellectual capabilities of younger generations and degrades the profession. Another of my hopes is that history as a field of research moves away from postmodern deconstruction of historical grand-narratives into the building of new historical narratives based on postmodern criticism. Postmodernism in history was necessary, but it played its role and now is the time for historians to move into something else.

Unfortunately, I do not have many collectible books – my real hobby is collecting postage stamps, which are sometimes indeed historical artifacts. This does not mean that I do not have plenty of scanned rare history books on my laptop, my favorite ones being those of Daniel Farlati’s monumental masterpiece Illyricum Sacrumfrom the 18thcentury, which I read quite often. I often buy small copies of Croatian medieval inscriptions, like the Tablet from Baška inscribed in the Glagolitic script, or the models of early medieval churches, such as my favorite building, St. Donatus from Zadar.

There are many rewarding experiences in my career. The most rewarding is certainly research, including archaeological excavations of the Bribirska glavica site near Skradin in Croatia, where I participate as one of co-directors for last 6 years. This is a multi-period site with habitation stretching from ca. 1000 BC to the 18th century, extremely rich with research potential.

There are also a few frustrating things, especially increasing bureaucratization of academic jobs and the need of universities to regulate every minor thing related to research and teaching. There is even a whole new bureaucratic language to learn – we are not writing research publications anymore but ‘produce research outcomes’, the journals and books became ‘publication outlets’, etc. Administration at universities is multiplying like bacteria and an immense amount of administrative work is eating energy which could be used for researching and teaching. This creates a paradox that successful bureaucrats in academia, at least in the humanities, today could climb on the academic ladder much faster than successful lecturers or innovative and productive researchers.

It changed quite a lot, actually, especially in the last ten years. Today, through digitalization we have an immense quantity of old and new literature and sources available in a matter of seconds. This provides unlimited opportunities for the researcher or student of history to get a much deeper understanding of the field of study and produce work much faster.

It is not technically history-related, but rather a historiography-related saying: Slavica non leguntur (“The Slavic languages are not read [world-wide]”), which symbolizes legitimized ignorance of local Slavophone historiographies by the Anglophone/Frankophone/Germanophone scholarship in the past but (unfortunately) also in the present.

I am currently working on manuscript of the book which is going to discuss making of the Middle Ages in Dalmatia – from Justinian’s reconquest in the 6th century, to the rule of the Croat duke Branimir in the late ninth century.