Robert N. Macomber is a writer and lecturer on Victorian-Edwardian world history and the award-winning author of 14 books, including his newest, Honoring the Enemy, about the Spanish-American War in Cuba. It was recently published by the United States Naval Institute Press. Visit: www.RobertMacomber.com. 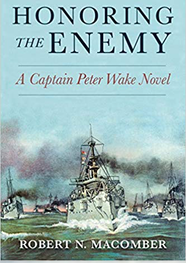 It was Saturday morning, September 14, 1901, and President William McKinley was dead, eight days after being shot by a crazed assassin. Americans were aghast—this was the third murder of a president in thirty-six years. Everything had been going so well. The economy had rebounded from the 1893 Panic, our industry was the most productive in the world, technological innovation had made life easier, and America had just won a war, gaining a new global empire with unlimited commercial possibilities.

Suddenly, the historically do-nothing office of vice-president was in the spotlight as its occupant was sworn in as the 26th president of the United States. In the cigar- and whiskey-reeking backrooms of big city political bosses, the august boardrooms of Wall Street moguls, and the genteel verandahs of Newport aristocrats, the nation’s elite was anxious about what kind of president Theodore Roosevelt would turn out to be. Many already had an idea and they didn’t like it. This was because by 1901, Roosevelt was anything but an enigma to America. Though he was only forty-two when he became president that Saturday, his moral character and intellectual ability were already widely known.

His moral character was illuminated from his first political office at age twenty-three in 1881, when he became the youngest person ever elected to the New York State Assembly. Roosevelt stood out from other politicians because of his fearless quest for honesty and efficiency in government. Over his next three terms in the statehouse, he took on powerful foes like financier Jay Gould, who had attempted to corrupt officials, and Judge Theodore Westbrook, who had a shady relationship with Gould. He not only believed, but showed, that honest government transcended party politics, working with Democratic Governor Grover Cleveland to pass a civil service reform bill. Within two years of his arrival, Roosevelt was chosen to be the Republican minority leader in the state assembly. These years in the gritty mechanics of legislative process provided him with solid experience in how government works, and how to craft arguments to advance his agenda. This knowledge helped greatly once he was president. It also gave him the impetus to fully use presidential power, as shown by the fact he issued more executive orders (over 1000) than any of his 25 predecessors.

His intellect showed early on, as well. During his life, Roosevelt was of the most prodigious readers and writers in America. By age twenty-four he had written The Naval War of 1812, a book which was soon required reading for naval officers around the world. To this day, it is considered the definitive history of that naval war. Over his lifetime, Roosevelt wrote (no ghostwriters for him!) dozens of magazine articles, essays, thousands of letters, and no less than forty-five books. His topics were diverse: hunting, social responsibility, travel, history, biography, politics, living the strenuous life. Naturally, his literary work spread his name and ideas, but it had another benefit. It introduced him to many of the famous journalists and authors of the day, several of whom became lifelong friends who promoted his political programs. It was not by coincidence that Colonel Roosevelt had his own press entourage while trudging through the jungles of wartime Cuba in 1898.

His impressive mental capacity was manifested in another way—he was an outstanding orator. He could converse in French and German, though with a pronounced American accent. Roosevelt’s experiences out west with cowboys, in the tenement slums of New York, and with soldiers in the army, people who were completely outside his social norm, taught him their language styles. It gave him confidence in public speaking with different cultures. It also gave him the ability to size up an audience’s pride, hopes, and fears, allowing him to personalize his message to them. Sometimes he even turned adversaries into advocates with his candid sincerity, as he did with German immigrants irate with his decision to enforce the no alcohol on Sunday laws as New York Police Commissioner in 1896. After speaking to them in German, he had them laughing with him. As recordings of his speeches show, Roosevelt’s voice was high pitched and not what we would consider stentorian, but his passion for the topic and audience emerged loud and clear. In short, he knew how to bond with the audience.

An obvious sign of Roosevelt’s remarkable self-discipline was his physical fitness, which greatly influenced his character. A sickly boy with severe asthma, as a teenager he transformed his frail body into that of an athlete. He became a devotee of daily practice in martial arts (Judo, boxing, and single-stickfighting). Roosevelt always seemed in motion. He never strolled—he strode. He didn’t walk up steps, he leaped two at a time. The tragic deaths of his father, and later his first wife and mother, and after that his brother, taught him perseverance through plunging into hard work, both physical and mental. His time with rough men in the Dakota Badlands, facing enemy fire in Cuba, and in rugged sports, gave him a determination which no one doubted. His clenched jaw and narrowed eyes could give pause to the fiercest opponent, either physical or political. And, of course, there was the other manifestation of his personality, a sense of gentle humor displayed in that famous ear-to-ear enameled grin, accompanied by a true belly-slapping laugh that was impossible to not join in. Often, it was directed at himself.

We mustn’t think Roosevelt perfect, however. His moral strength sometimes failed. One of the most prominent political causes which withered was his initial presidential support of black civil rights in the South in the face of increasingly oppressive Jim Crow laws and KKK violence. That faded as he dealt with the considerable southern political powerin Congress. An example is his early friendship for Booker T. Washington, inviting him to be the first African-American to dine at the White House only three weeks after being sworn-in as president. The backlash was immediate and vicious, and Mr. Washington never got another such invitation. During his second term in 1906, Roosevelt made the decision to rely on and support racist army officers’ evaluations and adjudication of a black regiment’s alleged rioting in Brownsville, Texas. A total of 167 soldiers were dishonorably discharged and humiliated, though later they were shown to be innocent. Many in the nation were disappointed by Roosevelt.

But when viewed overall, Roosevelt’s life was an extraordinary preparation for the presidency. For over twenty years, he devoted much of his life not to personal gain but to public service. By the time he became president, he’d worked in legislative and/or executive branches of municipal, state, and federal governments. He’d been in appointed positions like U.S. Civil Service Commissioner (under Republican and Democratic administrations) and New York Police Commissioner; and elected positions like assemblyman, governor, and vice-president. He’d won elections and lost them. He’d served in the military as assistant secretary of the U.S. Navy and as a volunteer colonel in the U.S. Army who endured combat. It was a remarkable resumé of service beyond oneself which has seldom been equaled by other presidents.

Among the upper-class in The Gilded Age, Theodore Roosevelt was an anomaly. Though he came from their class, he didn’t act like them. He didn’t want to change their lives. He wanted to change life for the rest of America, making citizens’ lives safer, fairer, and more hopeful. Roosevelt’s “Square Deal for Every Man” centered around consumer protection, corporate regulation, and conservation of America’s natural wonders.

A century later, America seems to be searching for a leader with moral character, intellectual ability, proven sacrifice for the nation, personal bravery, and genuine sincerity—a new version of Theodore Roosevelt. Someone with whom you might disagree on policy, but still personally admire and trust. Someone who can laugh at themselves, and even get you to join in. Someone the world will respect for speaking softly while carrying that big stick.

I know that person is out there, because even though so much has changed over the last 110 years, this is still the America of Theodore Roosevelt.