The Occupation of The Atlantic Mind

Walter L. Hixson is the author of Israel’s Armor: The Israel Lobby and the First Generation of the Palestine Conflict (Cambridge University Press, 2019), along with several other books and journal articles. He is distinguished professor of history at the University of Akron. 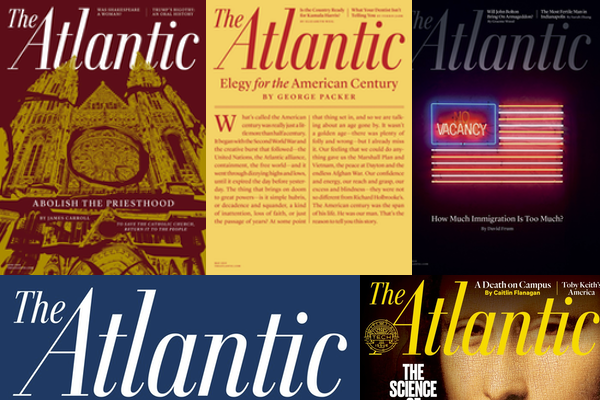 In the latest issue of The Atlantic (May 14, 2019), it should come as no shock that Benny Morris, an Israeli historian turned propagandist, attacks Rep. Rashida Tlaib (D-MI), the first Palestinian-American in Congress and a Muslim. Morris’s implacable hostility to Arabs—as Atlantic editor-in-chief Jeffrey Goldberg once put it--“sometimes leads him to inflammatory conclusions,” including Morris’s lament that Israel’s founder David Ben-Gurion failed to carry out a “full expulsion—rather than a partial one,” which could have “stabilized the State of Israel for generations.” The professor’s article is entitled, “Rashida Tlaib Has Her History Wrong.” Morris proceeds to show that he is indeed an expert at getting the history wrong.

Morris condemns Tlaib for pointing out that European Jews escaped anti-Semitism by occupying her family’s homeland. He continues with a hoary account ascribing Palestinians with “direct” responsibility for the Nazi genocide, citing the anti-Semitism of the Islamic leader of the era and the efforts to impede Jewish migration into Palestine. Despite local opposition, thousands of European Jews flooded into Palestine in the 1930s precipitating the 1936-39 Arab revolt, which Morris blames on the Palestinians rather than the European migrants.

In Morris’s unapologetic and at least borderline racist reading of the past, “most Palestinians still hope for Israel’s disappearance”—this offered with no supporting evidence—whereas “the Zionist side over the decades has repeatedly agreed to a compromise based on partitioning Palestine into two states” only to have “the Arab side” reject all proposals. So, there you have it—peace-loving Israel always making generous offers and the Allah-worshipping fanatics always turning them down in deference to their murderous plots to destroy the Jewish state. History made simple--and loaded with Zionist apologetics.

For the record, it is a historical fact that since the June 1967 war Israel has repeatedly rejected opportunities to trade land for peace and has instead pursued a colonial domination of the West Bank, the Golan Heights, as well as Egyptian territory and the Gaza Strip, the territories that it did belatedly relinquish. Until the 1990s Israel vigorously opposed any discussion and refused to negotiate toward the creation of any sort of “Palestinian entity.”

Morris understands that an effective propagandist must offer a counter-argument or two, if only deftly to dismiss them. Thus, he allows, it is true that since 1967 “the Israeli side has oppressed the Palestinian inhabitants and denied them various civil rights,” but sad to say, “such is the nature of military occupation.” (Imagine Morris, or anyone else, writing, “Jews were beaten in the streets and had their shops closed, but such is the nature of anti-Semitism.”)

What has happened in Palestine is not a “military occupation,” it is rather a settler colonization, one that as pertains to the West Bank and East Jerusalem is illegal and thus illegitimate, as well as being an ongoing and highly destabilizing human rights atrocity. Jewish settlements are scarcely mentioned by Morris, for the obvious reason that they have been illegal and had already rendered a two-state solution unworkable by 2000, the time of the mythical “generous offer” at Camp David, which Morris the propagandist resurrects as the best example of unregenerate Palestinian hostility to peace. For the record, a scholarly consensus holds that the offer of a bisected, non-contiguous state replete with Jewish-only roads, checkpoints, and ultimate Israeli control of state security represented no real opportunity for a viable independent Palestinian state, let alone constituting a “generous offer.”

Sadly, at one time, as Norman Finkelstein has pointed out on several occasions, Benny Morris was an accomplished historian and in fact played a key role in a much-needed post-Zionist scholarship in Israel. His research revealed that the ethnic cleansing of 1948 had been deliberate. Only later did he become a cheerleader for it. Unlike Ilan Pappe, Avi Shlaim, Nurit Peled, and many other Israeli historians who have their integrity intact, Morris, as Finkelstein accurately charges, became a court historian--a propagandist for the State of Israel.

The problem isn’t just Morris, however—it’s the Atlantic too. Founded as the Atlantic Monthly in Boston in 1857, The Atlantic is a venerable American publication with a distinguished record of literary and cultural criticism and political reportage. Today the magazine is distinguished by the intensity of its Zionist distortions of the past and present of the Palestine conflict.

The Atlantic’s palpable pro-Israeli bias should come as no surprise as its editor-in-chief since 2016 is Jeffrey Goldberg, a citizen of both Israel, which he served as an IDF prison guard, and the United States. Goldberg is a staunch Zionist and is quick to equate criticism of the Israel lobby with anti-Semitism, as he did in a notorious review in The New Republic (October 8, 2007) in which he directly linked the book by the distinguished political scientists John Mearsheimer and Stephen Walt, The Israel Lobby and U.S. Foreign Policy (2006), with Osama bin Laden’s brand of virulent anti-Semitism.

The brilliant 2016 documentary film identifies “The Occupation of the American Mind” at the root of misperceptions, imbalanced reporting, and outright disinformation on the Israel-Palestine issue. The case of The Atlantic and of Benny Morris remind us of the pernicious and monolithic nature of Zionist discourseand this ongoing “occupation.” It places the noble professions of journalism and history in the service a crude propaganda regime that seeks to perpetuate the occupation of the American mind.