Racism in America: What We Can Learn from Germany’s Struggle with Its Own Evil History 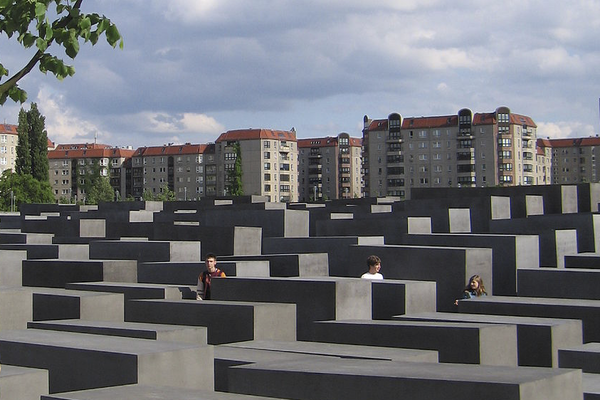 Memorial to the Murdered Jews of Europe in Berlin

President Trump’s racist tweet storm and the reactions of members of Congress have generated substantial media coverage that often criticizes the ugly remarks. Yet these discussions generally lack any historical context and are a poor substitute for a meaningful national conversation on the central role of slavery in America’s economic and political development.

What would such a “national reckoning” over slavery look like?

Many countries have historically oppressed racial minorities or committed terrible ethnic cleansing, but few have adequately grappled with their past or paid substantial sums in compensation to victims.

One nation that has done both is modern Germany, which has publicly acknowledged responsibility for the Holocaust. The Germans have even created a special noun, Vergangenheitsbewältigung, to describe the process. According to Wikipedia, the word has two closely related meanings: first, “a struggle to overcome the negatives of the past,” and second, “public debate within a country on a problematic period of its recent history.”

In Germany, this national debate has produced dozens of major monuments honoring the victims of the Holocaust and the creation of a K-12 educational curriculum which explains the Nazi government’s role in war crimes and condemns the perpetrators.

Since 1952, the German government has paid more than $75 billion in reparations to the state of Israel, Jewish relief organizations and individual victims of the Holocaust.

It is beyond the scope of this article to compare the crimes committed during America’s two hundred years of African-American slavery with the horrible tragedy of the Holocaust. We can, however, look at the process by which the German people have, in the last thirty years, slowly come to accept responsibility for the Nazi’s regimes crimes.

As the late historian Tony Judt wrote in his classic Postwar: A History of Europe Since 1945, “a nation has first to have remembered something before it can begin to forget it.”

In his book (published 2005), Judt notes that during the first five years after the end of World War II, the new, reconstituted German government tried to avoid any punishment or moral responsibility for crimes of the Third Reich. Their position, reflecting the attitude of most Germans, was “It was all Hitler’s fault.”

In schools, in the news media, and in many government statements, most German adults avoided any mention of the crimes against the Jews. The people experienced a “national amnesia” regarding the years 1933-45.

The first breakthrough came when Chancellor Konrad Adenauer in 1952 negotiated a treaty with the new nation of Israel. Known as the Luxembourg Agreement, it initiated a large-scale series of payments that continue to this day.

While the initial decision to “write a check” (i.e. pay compensations) came relatively soon after the war, when many of the victims were still alive and in desperate need, it would require a new generation, one with no direct ties to the Nazi regime, to publicly acknowledge the German people’s responsibility for the crimes committed against the Jews and other minorities.

During the massive rebuilding effort of the 1950s and 1960s, many attempts were made to remove any traces of the Nazi regime. For example, in Munich local authorities wanted to tear down and pave over the Dachau concentration camp. The American military, which had captured the site intact, insisted it be preserved as a testament to the crimes committed there.

As Judt noted in Postwar, a national discussion was spurred in 1979 when a four-part American TV series on the Holocaust was shown on German TV. The series included portrayals of the round-ups of Jewish citizens and depictions of the gas chambers. Many younger Germans had never been exposed to these images before.

On January 27, 1995, for the 50th anniversary of the liberation of Auschwitz, thousands of Germans voluntarily participated in ceremonies remembering the Holocaust. In 1999, the German parliament commissioned a new Memorial to the Murdered Jews of Europe, which opened in 2005. This stark display of 2,711 bare concrete slabs stands in the middle of the new, reunified Berlin. Today dozens of other major monuments and thousands of small plaques acknowledging the Holocaust are on display across Germany.

Can we Americans begin our own Vergangenheitsbewältigung?

At best, we have taken a few tentative steps. We have had a few movies and TV series, notably Twelve Years a Slave, which depicted the horrors of slavery in antebellum America. We also have the new National Museum of African American History and Culture, which has a deeply moving exhibit on slavery.

But there is also widespread ignorance or denial about slavery. Confederate statues still adorn many Southern cities and the halls of the U.S. Capitol. The Tennessee governor recently proclaimed July 13 Nathan Bedford Forrest Day in his state, honoring the former Confederate general, slave trader and early KKK leader.

A 2018 report by the Southern Poverty Law Center found that less than 8% of students knew why Southern states seceded from the union; only 12% knew about the economic importance of slavery to the North. A key problem, the SPLC noted, is that while a dozen states require teaching about some aspects of slavery, there is no nationally accepted, systematic approach.

For example, few American history textbooks point out that protections for slavery were embedded in the Constitution or that slave owners dominated the federal government from 1787 through 1860.

Sven Beckert, an acclaimed Harvard history professor, noted in his 2018 book Slavery’s Capitalism that during most of the 20th century, slavery was treated as a just Southern problem. However, a “new consensus” is emerging that all the American states benefited significantly from plantation slavery.  Rather than being a sidetrack or minor element in our history, Beckert asserts it is in fact “the interstate highway system of the American past.”

If so, it has yet to appear on the cultural road map of most Americans.