Julian Cribb is an author, journalist, editor and science communicator. He is principal of Julian Cribb & Associates who provide specialist consultancy in the communication of science, agriculture, food, mining, energy and the environment. His career includes appointments as newspaper editor, scientific editor for The Australian newspaper, director of national awareness for CSIRO, member of numerous scientific boards and advisory panels, and president of national professional bodies for agricultural journalism and science communication. Most recently, he is the author of Food or War (Cambridge University Press 2019). 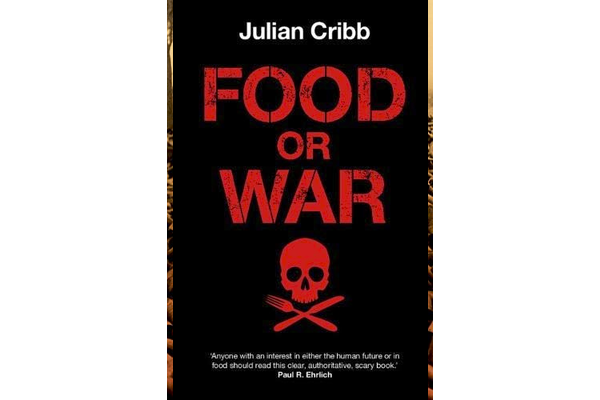 It is an oft-overlooked fact of history that World War II was originally fought chiefly over food and the means to produce it.

The military philosopher Clausewitz once observed that ‘War is the continuation of politics by other means’ and, in 1920s’  Weimar Republic Germany, the politics were very much about securing sufficient new land for the nation to thrive and to avoid a repetition of the horrors of World War I starvation – which had killed nearly a million Germans. This was fresh in everyone’s minds and still scarred their bodies.

Adolf Hitler knew hunger personally, understood its power over the minds of his fellow Germans and the importance of aligning himself with populist causes in order to pursue his more extreme agenda. At the time, few causes were more popular than Lebensraum (space for living), a racially tinged German ideology that had been circulating in the national discourse since the 1890s.

Lebensraum as a concept originated with a German ethnographer, Friedrich Ratzel, but its deep roots lay in successive German eastwards settler movements since the time of the Teutonic Knights and Baltic ‘crusades’ in the thirteenth century, which had conquered, settled and farmed the lands that became East Prussia and the contested Baltic coast. In World War I, the annexation of lands belonging to Poland in the Danzig corridor, by military conquest and for settlement purposes was an official German war aim. In the Treaty of Brest–Litovsk (March 1917) between Germany and Soviet Russia, whereby the Russians withdrew from the war, the Germans fleetingly acquired rich lands as far afield as parts of European Russia, the Baltic states, Belarus, Ukraine and the Caucasus – which they promptly lost again 15 months later in the Treaty of Versailles (June 1919).

Hitler knew that, short of outgunning Britain’s Royal Navy, Germany was never going to get back its former African and Pacific colonies to feed it, and his mind became more and more focussed around the acquisition of Lebensraum to the east: Poland, Czechoslovakia and especially the USSR. Incredibly, he even believed the British would back him: in 1922 he confided to a sympathetic newspaper editor ‘The destruction of Russia, with the help of England, would have to be attempted. Russia would give Germany sufficient land for German settlers and a wide field of activity for German industry’.

In 1924, for his part in staging the failed Beer Hall Putsch in Munich, Hitler was gaoled in Landsberg Prison. Here, his dreams about acquiring vast lands for a new Germany began to take shape, encouraged by his adoring deputy and fellow gaolbird, Rudolph Hess – who held mystical views on soil and German blood – while he wrote Mein Kampf (1925/6). In it, Hitler tipped his hand by enunciating his three main aims:

• to demolish the Treaty of Versailles and its ‘unfair’ effects on Germany;

• to unify the German-speaking peoples, i.e. form them into a much larger, more powerful and cohesive racial and cultural unit; and

Evoking German mediaeval history from the time of the crusading Teutonic Knights as his precedent, Hitler explained ‘And so, we National Socialists consciously draw a line beneath the foreign policy tendency of our pre-War period. We take up where we broke off six hundred years ago. We stop the endless German movement to the south and west, and turn our gaze toward the land in the East. At long last, we break off the colonial and commercial policy of the pre-War period and shift to the soil policy of the future’.

Propelled by the memory of hunger, Lebensraum became the central pillar and objective of German foreign policy under Hitler in the 1930s and 40s, and hence Germany’s chief war aim, historian Manfred Messerschmidt states. Just before the invasion of Poland in 1939 – and while he was still, on paper, an ally of the USSR – Hitler himself declared that Germany needed ‘the Ukraine, in order that no one is able to starve us again, as in the last war’.

Thus, European World War II was first and foremost about soil – and the objective was to take it from the USSR, resettle and manage it on German agrarian principles. What was to be done with the displaced populations was not, at first, clearly spelt out. A meeting of the responsible German ministries in May 1941, a month before the panzers rolled into Russia, concluded:

• ‘The war can only be continued if the entire Wehrmacht is fed from Russia in the third year of the war.’

• ‘If we take what we need out of the country, there can be no doubt that tens of millions of people will die of starvation.’

In charge of this horror was a mild-looking technocrat, Herbert Backe, who was an SS officer and the second highest Nazi official in the food administration responsible, among other things, for domestic rationing. His solution, known as The Hunger Plan (der Hungerplan) plotted methodically the death by starvation of millions of Soviet citizens and was the true weaponization of hunger.

The resulting death toll from starvation of Ukrainians, Byelorussians and Jews, has been placed at 4.2 million. In addition, around 3.5 million captured Russian soldiers died of starvation in German POW camps, and a further million Soviet citizens are said to have perished of hunger in the siege of Leningrad.

While not so explicit a war aim for Japan as for Germany, the acquisition of new lands to stave off hunger at home was nevertheless a potent driver in the origins of World War II in the East. Japan had suffered from the Great Depression and this was compounded by famine: ‘Around 1931, rural impoverishment became severe. Moreover in 1934, rural communities were hit by famine. Especially in Tohoku (north eastern) Region of Japan, rural poverty generated many undernourished children and some farmers were forced to sell their daughters for prostitution. This rural disaster caused much anger and popular criticism against the government and big businesses’.

World War II began in the East with the Japanese occupation of Manchuria in north eastern China in June 1931. In December the Japanese government began actively to pursue a policy of foreign expansion in order to secure more territory and resources, including food, in order to overcome the effects of the Depression. The occupation of Manchukuo – as the puppet state became known – with its rich natural and agricultural resources, found wide public support in Japan where it became known as the ‘Manchurian lifeline’.

By 1936, the Japanese Government’s ‘Millions to Manchuria’ migration programme was deluging rural Japan with leaflets and posters extolling the need to resettle a million Japanese farmers in Manchuria over the coming 20 years. Around 380,000 answered the call – and were joined by a further 600,000 Korean agrarian resettlers.

In all, more than 20 million people died of hunger in World War II, compared with 19.5 million combat deaths. The true total may be far higher, if estimates of >35m starved in China are correct. Most of these deaths were the result of deliberate policies intended to weaken opposition, control occupied peoples or starve locals to feed armies. These famines present a series of separate, yet intimately connected, food crimes – and have become a pattern for food wars in the 21st Century.

In Food or War (Cambridge University Press 2019) I present evidence that such conflicts can be prevented and healed by securing the food supply to troubled regions. And that the technologies and resources to do this already exist.