“The thinking power called an idea”: Thomas Jefferson and the Right to Patents

M. Andrew Holowchak is a philosopher and historian, and author/editor of 11 books and over 90 published essays on Thomas Jefferson. He is also author of many other books and numerous essays on psychotherapy, Greek/Roman philosophy, ethics, philosophy of education, philosophy of sport, and critical thinking, inter alia. He can be reached at http://www.mholowchak.net. 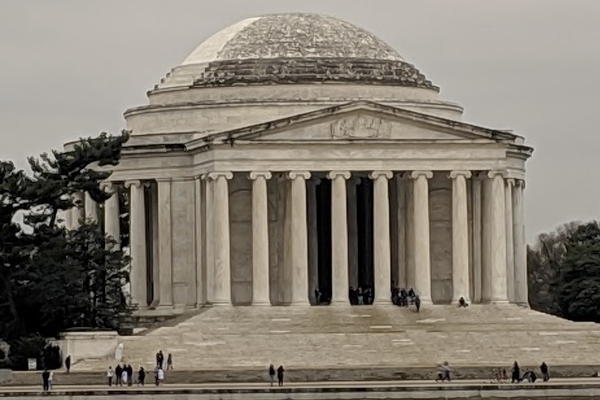 As the duties of the various members of a president’s cabinet were much less fixed than they are now, Jefferson was often asked by President Washington to do many tasks that that would seem strange for today’s Secretary of State to do. One such task was to oversee an office directing the granting of patents for new inventions.

Jefferson, no stranger to invention and a lover of ideas, was singularly qualified for the job. Secretary of the Treasury, Alexander Hamilton, and the Attorney General, Edmund Randolph assisted him. A patent act—“An Act to Promote the Progress of the Useful Arts”—was introduced to the Congress in 1789, while Jefferson was still in France. After Jefferson’s return and acceptance of the position of Secretary of State in 1790, the act was passed (Apr. 10) and Jefferson was appointed head of the new-formed Board of Arts. If two of three members of the committee like the idea, the patent was approved. Unlike most European offices which tended to only favor ideas from the aristocracy, ideas from all citizens were considered. “The United States consciously created patent and copyright institutions that were intended to function as the keystone of a democratic society,” writes B. Zorina Khan.

Despite democratizing invention, the committee granted relatively few patents, just three in the first year and 57 in the three-year period when the law was in effect. In Jefferson and the Rights of Man, Dumas Malone writes that “Guiding Jefferson while patents came to him for review was the belief that patents should be given to particular machines, not to all possible applications or uses of them; that mere change in material or form gave no claim; and that exclusive rights of an invention must always be considered in terms of the invention’s social benefit.” Examples of accepted patents include improved sail-cloths for ships, distilling techniques for alcohol, and fire retardants as well as an improved steamboat.

Jefferson was, without question, a natural choice to head the Board of Arts, as no other politician of his day patronized the sciences as did he. “To all who knew this man of limitless scientific curiosity and inventive mind,” continues Malone, “his official connection with the promotion of the useful arts must have seemed eminently appropriate.” Jefferson himself wroteto Monsieur l’Hommande (9 Aug. 1787), and said he “found the means of preserving flour more perfectly than has been done hitherto”: “Every discovery which multiplies the subsistence of man, must be a matter of joy to every friend to humanity.”

Yet in another sense, it is bizarre that Jefferson headed an office issuing patents, given that he was always against monopolizing of any sort. He considered monopolizing a useful idea to be a crime, especially in a developing country in large need of useful ideas.

Yet praxis and duty to his country triumphed. In a letter to Madison (28 Aug. 1789), he, critiquing the Bill of Rights sent to him while still in France, offers certain addenda to that bill. One addendum is a right to patent an idea, but for a limited period of time. “Monopolies may be allowed to persons for their own productions in literature & their own inventions in the arts, for a term not exceeding *** years but for no longer term & no other purpose.” He stated to Oliver Evans some two decades later (2 May 1807): “an inventor ought to be allowed a right to the benefit of his invention for some certain time. it is equally certain it ought not to be perpetual.” If perpetual, it would “embarrass society with monopolies for every utensil existing, & in all details of life.”

Jefferson’s cleanest expression of his views on patents came in a weighty letter to Isaac McPherson (13 Aug. 1813) about Oliver Evan’s proposed elevator patent—a string of buckets fixed on a leather strap, for drawing up water. Is Evans’ machine his own, “his invention,” or do others have right of usage? Jefferson wasc oncerned with the machine itself, not its usage. If one person, for instance, received a patent for a knife that points pens, another could not receive a patent for the same knife for pointing pencils.

Jefferson begins by noting he has seen similar contraptions used by numerous others—“I have used this machine for sowing Benni seed also” and intends to have other bands of buckets in use for corn and wheat—and even notes that such an elevator was in use in Ancient Egypt. He sums, “There is nothing new in these elevators but being strung together on a strap of leather.” If Evans is to be credited with anything new, “it can only extend to the strap,” yet even the leather strap was used similarly by a certain Mr. Martin of Caroline County, Virginia. There is, Jefferson is clear, nothing original in Evans’ machine.

Jefferson, however, had more to say: many believe that “inventors have a natural and exclusive right to their inventions,” which is “inheritable to their heirs.” Yet it “would be singular to admit a natural and even an hereditary right to inventors.”

Why? “Whatever, fixed or movable, belongs to all men equally and in common, is the property for the moment of him who occupies it.” Yet when he relinquishes occupation, he relinquishes ownership. It would be strange to think that a person acquiring ownership of some property, thus, has a natural right to it. That would mean that no one has a right to the property after he perishes, and even more absurdly, that no one had a right to that property prior to him having acquired the land. “Stable ownership is the gift of social law,” and not of nature. The argument applies straightforwardly to ideas. Jefferson sums, “It would be curious then,” adds Jefferson, “if an idea, the fugitive fermentation of an individual brain, could, of natural right, be claimed in exclusive and stable property.” The argument for patenting ideas by appealing to nature is untenable.

Jefferson still has more to say. The analogy has its flaws. Ideas are singular. If there is anything that nature has made “less susceptible than all others of exclusive property, it is the action of the thinking power called an idea.” Each person possesses exclusively any idea so long as it is unshared. Once shared, it belongs to everyone.

Moreover, an idea shared is fully possessed by all who entertain it. “He who receives an idea from me, receives instruction himself without lessening mine; as he who lights his taper at mine, receives light without darkening me.” The same cannot be said for property shared. It is that power of an idea, to be shared without lessening its density, which makes it a special gift of nature for “the moral and mutual instruction of man.” He sums, “Inventions then cannot, in nature, be a subject of property.”

If there is no natural right for patenting an idea, it is now a matter of convention—that is, appeal to law. What sort of law ought there to be concerning patents? To Jefferson, the answer concerned the social benefits of patents.

England was the first country to patents ideas, and America copied it—an indication of some benefit to the patenting of ideas. Still most nations thought that such monopolizing of ideas engenders “more embarrassment than advantage to society.” Moreover, Jefferson believed nations that didnot monopolize inventions “are as fruitful as England in new and useful devices.” Patenting an idea didnot seem to extend its benefits.

Though Jefferson expressly settles on no conclusion apropos the utility of patenting ideas, his appeal to nature indicates disrelish of the notion of social benefits of patents. Ideas are too powerful to be imprisoned by patents, and to patent a useful invention, for instance, is to prevent it from full moral and mutual instruction. No better evidence of that is Jefferson’s own refusal to patent his plow moldboard, which was awarded a gold medal for it by the French Society for Agriculture.

Jefferson’s suggestion that ideas, because of their potential for social benefit, not be chained to patents but be freely shared, goes against the etymological legacy that ideas are personal. The Greek idea means “form,” “appearance,” “nature,” or “idea.” Its adjectival form, idios (m.) means “one’s own,” “personal,” or “peculiar.”

“The action of the thinking power called an idea” is a powerful, even intoxicating Jeffersonian sentiment. Ideas, thus, are potent and singular possessions. One, moved by an idea, is no less moved when he shares it with another, hence the warrant for sharing.

Jefferson’s own ideas on ideas, I maintain, are as pungent now as they were when he articulated them, and that pungency can nowise be diminished today by sharing them. They also signal much about the man who articulated them.