Ryan Swanson is Associate Professor at the University of New Mexico and author of The Strenuous Life: Theodore Roosevelt and the Making of the American Athlete (Diversion Books). 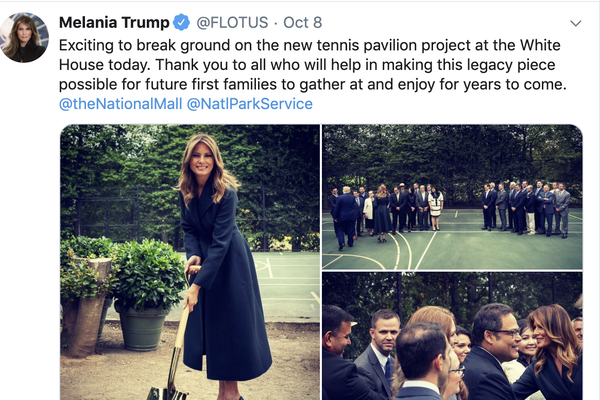 On Tuesday October 8, with impeachment speculation swirling and increasingly disturbing reports coming out of Syria, First Lady Melania Trump broke through the noise to share some good news: Ground was being broken for the construction of a new tennis pavilion at the White House.

The 1,200 square foot pavilion, we learned, will replace a small, lattice-covered bathroom structure currently on the site.  The White House tennis court itself, in its current location for the last 40 years and retrofitted most recently with a basketball hoop and court lines for Barack Obama, will remain mostly untouched.

“It is my hope that this private space will function as a place to gather and spend leisure time for First Families,” the First Lady said in a statement.  She also clarified that this “Legacy Project” would be funded entirely with private donations.  Like the First Ladies that preceded her, Melania intended to leave the White House a better place than she found it.

Not surprisingly, the announcement caused the Twittersphere to lose its collective mind.

@TonyPosnanski’s tweet captured the general mood of those that responded to @FLOTUS.

“Thousands of our allies are being attacked because we abandoned them because of your husband, your husband is attacking the Constitution, and your husband is bullying Americans, but congrats on the new tennis court. Seriously, [explitive] you.  You are an embarrassment.”

The response to the announcement became as much as story as the project itself.  “Melania Trump Trolled Over Her ‘Legacy Piece’: Does the White House Need an Entire Tennis Court Pavilion?” Newsweek asked.

Shortly after ascending to the Presidency following the assassination of William McKinley in 1901, Roosevelt requested funds from Congress to overhaul the White House.  The executive mansion needed the attention; problems varied from exposed wiring (fire hazard) to cramped office space.

As part of the renovation, the landscaping crew—working under Edith Roosevelt’s watchful eye—installed the first White House tennis court.  They placed it immediately adjacent to the President’s executive office, on the spot where the Oval Office sits today.

As the court neared completion, both the Washington Post and New York Times picked up on the story.  The “President’s Children to Have a Model Playground Adjoining his Office,” the Post reported.

Not everyone approved. Roosevelt’s critics seized upon the White House new tennis court as a sign that the President was out of touch with the average American.  One Tennessee newspaper, for example, suggested that the nation could hardly afford to keep Roosevelt in the White House.  “The White House has been enlarged at an expense of $500,000,” the paper wrote, “a $2,500 tennis-court has been built for his children, and the living expenses have been about triple.”  The paper called for an end to “this carnival of graft and extravagance.”

A debate about the court ensued.  Roosevelt’s steadiest literary supporter, Outlook, argued in defense of the tennis court.  “Is the President Extravagant?”  No.  “It is true that there is a tennis-court on the White House grounds, but it cost less than … the greenhouses under the previous administrations.”

The editors of Outlook put forth an early form of life-balance counseling.  “We think there can be no serious objection on the part of any decent American to the President playing tennis with his children, and it is impossible for them to play tennis except on the White House grounds.”  The Republicans liked the Outlook article so much, they entered it into the Congressional record.

For Roosevelt, however, the White House Tennis Court eventually went from being a political liability to an asset.

Stories of Roosevelt’s long, sweaty matches—sometimes against unprepared foreign dignitaries—came to bolster his reputation as a purveyor of “The Strenuous Life.”  The group of 30 or so regulars at the court became known as Roosevelt’s “Tennis Cabinet.”

The fact that Roosevelt went public at times about his struggle to keep his weight under control, and thus felt compelled to fit tennis (or boxing or hiking) into his schedule, also resonated in a nation struggling with the realities of urbanization and industrialization.

While Melania declared her tennis pavilion a gift to future White House inhabitants, it seems likely that TR’s tennis court came about as a spousal nudge from Edith.  Edith was concerned about her husband’s growing waistline.  Life in the White House, Roosevelt admitted as the tennis court was being finished, “has been very conducive to me getting fat.”  Edith certainly noticed.  Once complete, the court, just steps from the President’s desk, served as a reminder to TR to get out and exercise.

Effort trumped expertise on the TR’s White House tennis court.  “My impression is that father didn’t play a great game, but played very hard,” Roosevelt’s always-candid daughter Alice explained.  Or as another observer put it: “He played tennis vigorously on the White House courts, though he never became very expert, there being no danger at any time of the President’s entering the National Tennis Tournament at Newport.”

As Roosevelt’s administration neared its end, the narrative regarding the White House tennis court took on an exuberantly positive tone.  No journalist portrayed Roosevelt as a tennis snob playing on his own taxpayer-provided court; rather the press fought amongst itself to see who could best capture the image of a President of the United States valiantly competing on the court even though he had a country to run.  The President finds time for exercise, the thinking went, thus so should you.

After Roosevelt left the White House, William H. Taft took over and oversaw the bulldozing of TR’s court in order to make room for further West Wing improvements.  Taft cared little about the change; he preferred golf to tennis anyhow.  Landscape architects configured a new court into the south lawn area of the grounds. The court was moved several times before taking its current position.  In 1989, President George H.W. Bush signed off on improvements to the tennis court, which until Obama retrofitted it for basketball, made the court what it is today.

The Tennis Court snagged other victims along the way.  It was on the tennis court, so the story has long gone, that Calvin Coolidge Jr. got a blister, that then got infected, which then led to the teenager’s death from blood poisoning in 1924.

For Jimmy Carter, the White House tennis court became a symbol of a weak, distracted, micro-managing President.  Late in his term, a White House insider wrote a tell-all accusing Carter of personally managing all requests to use the tennis court.  Carter denied the story, but it stuck.

At a press conference on April 30, 1979, after talking about energy conservation, and the Soviet threat, and strategic arms limitations, Carter tried to put the tennis court issue to bed:

Needless to say, the non-denial denial did nothing to help Carter’s image.

The lesson in all of this?  Beware of the White House tennis court.  Or more directly: Presidents, be wary of associating with country club sports during times of political crisis.

As Theodore Roosevelt explained it: “I myself play tennis, but the game is a little more familiar; besides you never saw a photograph of me playing tennis.”

Perhaps just for someone like President Donald Trump, Roosevelt expounded even further.  “I am careful about that,” Roosevelt said of publicity regarding his connections to sports.  “Photographs on horseback, yes; tennis, no.  And golf is fatal.” 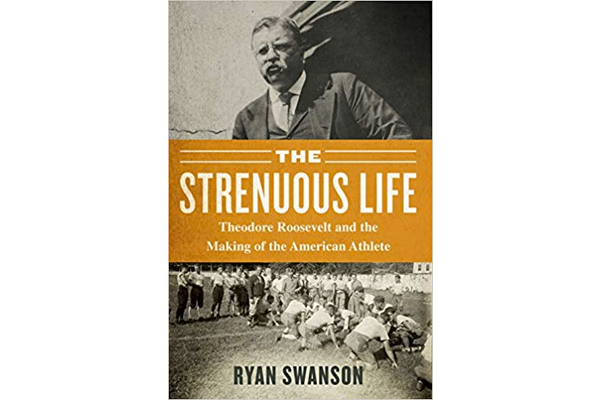