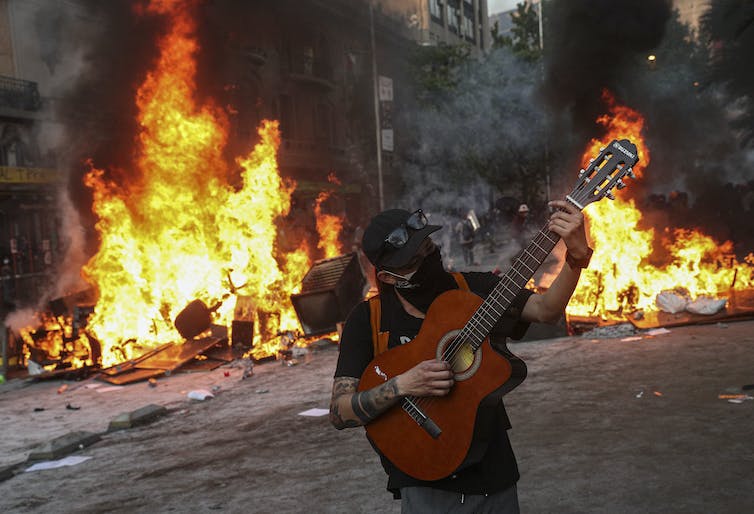 Chile’s current constitution, which dates back to 1980, was written under Gen. Augusto Pinochet, the dictator who ruled the country from 1973 to 1990. Pinochet is reviled for overseeing several thousand extrajudicial executions, torture and forced disappearances. He was arrested in 1998 on charges of crimes against humanity but died before being tried.

But he also implemented the free-market reforms that are often credited for Chile’s celebrated economic dynamism. After growing at an average of 4.7% a year, Chile’s economy today is nine times larger than it was in 1990.

Since Pinochet’s exit, Chile has been widely seen as a stable and vibrant Latin American success story. So even left-leaning governments have mostly left the dictatorship-era economic system in place.

Chile is one of the world’s most unequal countries, with less equitable income distribution than neighboring Peru, Bolivia and Argentina.

Such statistics reflect a reality that most Chileans know firsthand. Chile’s enormous economic growth benefited the rich, but working and middle-class people still struggle with low wages and job insecurity. As protesters consistently point out, simply earning enough for health insurance and retirement is a constant struggle.

These problems began with Pinochet’s free-market reforms. After assuming power in the 1973 coup against President Salvador Allende, the right-wing dictator set about dismantling the welfare state the socialist Allende had begun to build. The policy changes he made were codified in the 1980 constitution. 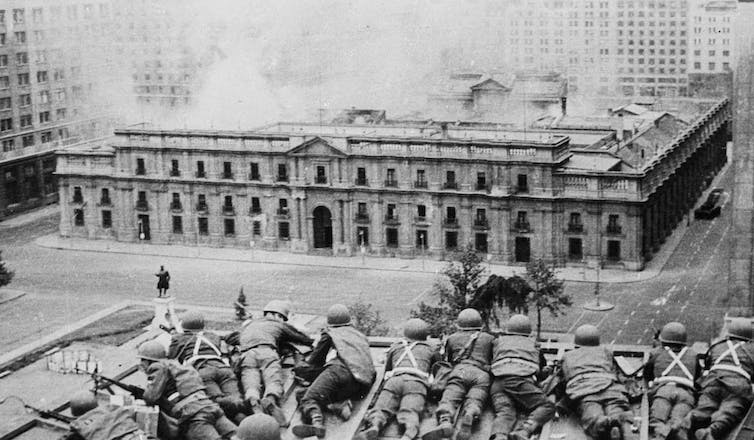 Pinochet targeted three areas – labor rights, retirement and health care. These neoliberal reforms, which came with strong support from the U.S. government, shifted primary responsibility for managing the economy and providing social services from the state to the private sector.

The most important determinant of inequality, my research finds, was the dictator’s evisceration the rights of Chilean workers to organize and negotiate with employers.

Pinochet did this by creating new ways for companies to hire workers, including allowing different types of temporary contracts. In Chile, temporary workers do not have the right to worker protections such as severance payments when terminated, employer-paid protections against workplace injury and the right to unionize.

These rules make temporary workers cheap labor, giving employers strong incentives to maintain or expand their reliance on them. As a result, less than 3% of Chilean workers are covered by contracts that allow workers to collectively organize to negotiate with management.

Even permanent workers saw their unionization rights decrease markedly under Pinochet’s labor code. Many Chilean workers ended up in weakened so-called bargaining groups that do not grant workers the right to strike. Overall union membership in Chile today is less than half what it was under Allende.

The opposite happened. Despite enormous economic growth over the past three decades, employment rates for workers at the lower end of the economic ladder remain exceptionally low.

The unemployment rate for workers at the bottom 10th of Chile’s socioeconomic ladder has averaged nearly 30% since 1990, government data shows. Meanwhile, unemployment for the top 10th of earners has stayed around 2%.

Pinochet-era changes to Chile’s pension system have compounded inequities in the labor market.

In keeping with its extreme free market ideology, Pinochet’s military regime replaced the original retirement system – which was based on combined contributions from workers, employers and the state – with a privately managed pension system.

Under this system, all workers except the military and national police were made solely responsible for their individual retirement accounts. The state and business contributed nothing.

Under the leftist President Michelle Bachelet, Chile in 2008 began to provide minimum pensions for the poorest retirees, too.

Because employers don’t help employees save for retirement, the cost of labor in Chile is comparatively low, increasing Chile’s competitiveness in the global economy.

But Chilean retirees have fared poorly. Most can’t save enough to sustain themselves in old age. 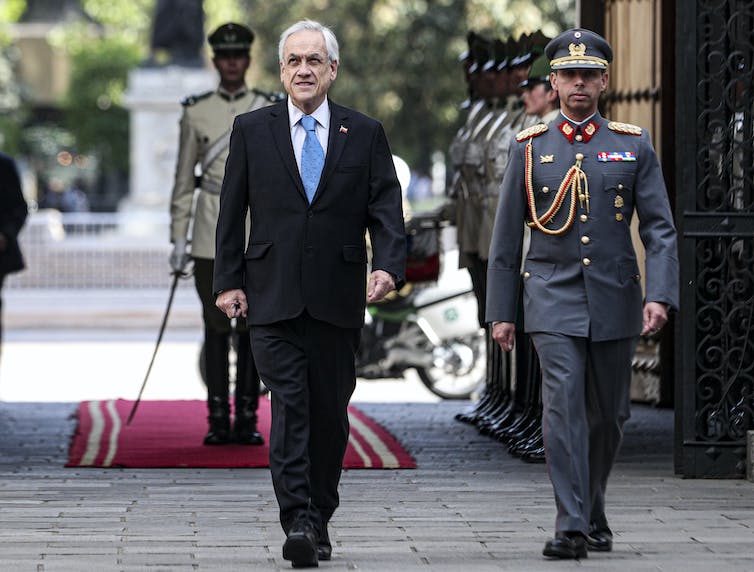 President Sebastian Piñera, who previously governed the country from 2010 to 2014, has agreed to Chilean protester demands for a new constitution. AP Photo/Esteban Felix

Pinochet’s privatization of Chile’s health care system has similarly increased the distance between rich people and everyone else.

Under Allende, Chile was headed toward free, universal health care. The Pinochet regime created a for-profit private health care system to compete with the government-run system, but it’s so prohibitively expensive that 90% of the poorest third of Chileans still rely exclusively on the public system. It is critically underfunded and offers lower-quality care than the private system.

The fractures in the veneer of Chile’s “model economy” have been showing since at least 2006, when massive, nationwide student protests erupted over increased education costs.

Like those earlier protests, students have been at the forefront of today’s protests. Many are too young to remember the human rights abuses, political repression and economic deprivation of Pinochet’s regime. But they have personal experience with the social inequality it gave rise to.

Mass protests are the result of those two realities. Raised in democracy, Chile’s young protesters expect a fairer share of the country’s wealth. And they’re not old enough to fear an authoritarian crackdown for proclaiming their rights.

Correction note: this story has been updated to correct data on the wealth gap.

We regret the error.