The Capital City and the Civil War

S.C. Gwynne is the author of Hymns of the Republic: The Story of the Final Year of the American Civil War and the New York Times bestsellers Rebel Yell and Empire of the Summer Moon, which was a finalist for the Pulitzer Prize and the National Book Critics Circle Award. He spent most of his career as a journalist, including stints with Time as bureau chief, national correspondent, and senior editor, and with Texas Monthly as executive editor. He lives in Austin, Texas, with his wife. For more information, please visit https://scgwynne.com 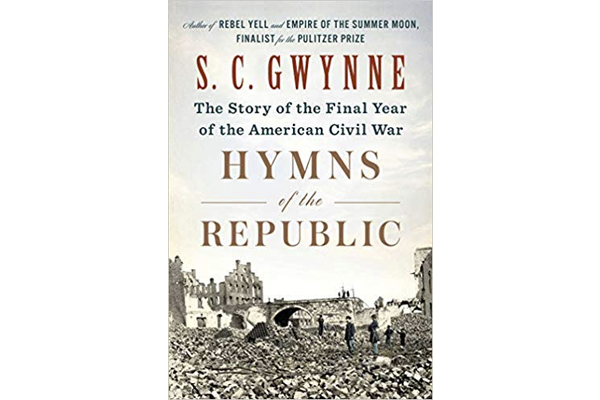 Washington, DC, had never, in its brief and undistinguished history, known a social season like this one. The winter of 1863–64 had been bitterly cold, but its frozen rains and swirling snows had dampened no spirits. Instead a feeling, almost palpable, of optimism hung in the air, a swelling sense that, after three years of brutal war and humiliating defeats at the hands of rebel armies, God was perhaps in his heaven, after all. The inexplicably lethal Robert E. Lee had finally been beaten at Gettysburg. Vicksburg had fallen, completing the Union conquest of the Mississippi River. A large rebel army had been chased from Chattanooga. Something like hope—or maybe just its shadow—had finally loomed into view.

The season had begun as always with a New Year’s reception at the Executive Mansion, hosted by the Lincolns, then had launched itself into a frenzy whose outward manifestation was the city’s newest obsession: dancing. Washingtonians were crazy about it. They were seen spinning through quadrilles, waltzes, and polkas at the great US Patent Office Ball, the Enlistment Fund Ball, and at “monster hops” at Willard’s hotel and the National. At these affairs, moreover, everyonedanced. No bored squires or sad-eyed spinsters lingered in the shadows of cut glass and gaslight. No one could sit still, and together all improvised a wildly moving tapestry of color: ladies in lace and silk and crinolines, in crimson velvet and purple moire, their cascading curls flecked with roses and lilies, their bell-shaped forms whirled by men in black swallowtails and colored cravats.

The great public parties were merely the most visible part of the social scene. That winter had seen an explosion of private parties as well. Limits were pushed here, too, budgets broken, meals set forth of quail, partridge, lobster, terrapin, and acreages of confections. Politicians such as Secretary of State William Seward and Congressman Schuyler “Smiler” Colfax threw musical soirees. The spirit of the season was evident in the wedding of the imperially lovely Kate Chase—daughter of Treasury Secretary Salmon P. Chase—to Senator William Sprague. Sprague’s gift to Kate was a $50,000 tiara of matched pearls and diamonds. When the bride appeared, the US Marine Band struck up “The Kate Chase March,” a song written by a prominent composer for the occasion.

What was most interesting about these evenings, however, was less their showy proceedings than the profoundly threatened world in which they took place. It was less like a world than a child’s snow globe: a small glittering space enclosed by an impenetrable barrier. For in the winter of 1863–64, Washington was the most heavily defended city on earth. Beyond its houses and public buildings stood thirty-seven miles of elaborate trenches and fortifications that included sixty separate forts, manned by fifty thousand soldiers. Along this armored front bristled some nine hundred cannons, many of large caliber, enough to blast entire armies from the face of the earth. There was something distinctly medieval about the fear that drove such engineering.

The danger was quite real. Since the Civil War had begun, Washington had been threatened three times by large armies under Robert E. Lee’s command. After the Union defeat at the Second Battle of Bull Run in August 1862, a rebel force under Lee’s lieutenant Stonewall Jackson had come within twenty miles of the capital while driving the entire sixty-thousand-man Union army back inside its fortifications, where the bluecoats cowered and licked their wounds and thanked heaven for all those earthworks and cannons.

A year and a half later, the same fundamental truth informed those lively parties. Without that cordon militaire, they could not have existed. Washington’s elaborate social scene was a brocaded illusion: what the capital’s denizens desperately wanted the place to be, not what it actually was.

This garishly defended capital was still a smallish, grubby, corrupt, malodorous, and oddly pretentious municipality whose principal product, along with legislation and war making, was biblical sin in its many varieties. Much of the city had been destroyed in the War of 1812. What had replaced the old settlement was both humble and grandiose. Vast quantities of money had been spent to build the city’s precious handful of public buildings: the Capitol itself (finished in December 1863), the Post Office Building, the Smithsonian Institution, the US Patent Office, the US Treasury, and the Executive Mansion. (The Washington Monument, whose construction had been suspended in 1854 for lack of funds, was an abandoned and forlorn-looking stump.)

But those structures stood as though on a barren plain. The Corinthian columns of the Post Office Building may have been worthy of the high Renaissance, but little else in the neighborhood was. The effect was jarring, as though pieces of the Champs-Élysées had been dropped into a swamp. Everything about the place, from its bloody and never-ending war to the faux grandiosity of its windswept plazas, suggested incompleteness. Like the Washington Monument, it all seemed half-finished. The wartime city held only about eighty thousand permanent residents, a pathetic fraction of the populations of New York (800,000) and Philadelphia (500,000), let alone London (2.6 million) or Paris (1.7 million). Foreign travelers, if they came to the national capital at all, found it hollow, showy, and vainglorious. British writer Anthony Trollope, who visited the city during the war and thought it a colossal disappointment, wrote:

Washington is but a ragged, unfinished collection of unbuilt broad streets.… Of all the places I know it is the most ungainly and most unsatisfactory; I fear I must also say the most presumptuous in its pretensions. Taking [a] map with him… a man may lose himself in the streets, not as one loses oneself in London between Shoreditch and Russell Square, but as one does so in the deserts of the Holy Land… There is much unsettled land within the United States of America, but I think none so desolate as three-fourths of the ground on which is supposed to stand the city of Washington.

He might have added that the place smelled, too. Its canals were still repositories of sewage; tidal flats along the Potomac reeked at low tide. Pigs and cows still roamed the frozen streets. Dead horses, rotting in the winter sun, were common sights. At the War Department, one reporter noted, “The gutter [was] heaped up full of black, rotten mud, a foot deep, and worth fifty cents a car load for manure.” The unfinished mall where the unfinished Washington Monument stood held a grazing area and slaughterhouse for the cattle used to feed the capital’s defenders. The city was both a haven and a dumping ground for the sort of human chaff that collected at the ragged edges of the war zone: deserters from both armies, sutlers (civilians who sold provisions to soldiers), spies, confidence men, hustlers, and the like.

Washington had also become the nation’s single largest refuge for escaped slaves, who now streamed through the capital’s rutted streets by the thousands. When Congress freed the city’s thirty-three hundred slaves in 1862, it had triggered an enormous inflow of refugees, mostly from Virginia and Maryland. By 1864 fifty thousand of them had moved within Washington’s ring of forts. Many were housed in “contraband camps,” and many suffered in disease-ridden squalor in a world that often seemed scarcely less prejudiced than the one they had left. But they were never going back. They were never going to be slaves again. This was the migration’s central truth, and you could see it on any street corner in the city. Many would make their way into the Union army, which at the end of 1863 had already enlisted fifty thousand from around the country, most of them former slaves.

But the most common sights of all on those streets were soldiers. A war was being fought, one that had a sharp and unappeasable appetite for young men. Several hundred thousand of them had tramped through the city since April 1861, wearing their blue uniforms, slouch hats, and knapsacks. They had lingered on its street corners, camped on its outskirts. Tens of thousands more languished in wartime hospitals. Mostly they were just passing through, on their way to a battlefield or someone’s grand campaign or, if they were lucky, home. Many were on their way to death or dismemberment. In their wake came the seemingly endless supply trains with their shouting teamsters, rumbling wagon wheels, snorting horses, and creaking tack.

Because of these soldiers—unattached young men, isolated, and far from home—a booming industry had arisen that was more than a match for its European counterparts: prostitution. This was no minor side effect of war. Ten percent or more of the adult population were inhabitants of Washington’s demimonde. In 1863, the Washington Evening Star had determined that the capital had more than five thousand prostitutes, with an additional twenty-five hundred in neighboring Georgetown, and twenty-five hundred more across the river in Alexandria, Virginia. That did not count the concubines or courtesans who were simply kept in apartments by the officer corps. The year before, an army survey had revealed 450 houses of ill repute. All served drinks and sex. In a district called Murder Bay, passersby could see nearly naked women in the windows and doors of the houses. For the less affluent—laborers, teamsters, and army riffraff—Nigger Hill and Tin Cup Alley had sleazier establishments, where men were routinely robbed, stabbed, shot, and poisoned with moonshine whiskey. The Starcould not help wondering how astonished the sisters and mothers of these soldiers would be to see how their noble young men spent their time at the capital. Many of these establishments were in the heart of the city, a few blocks from the president’s house and the fashionable streets where the capital’s smart set whirled in gaslit dances.

This was Washington, DC, in that manic, unsettled winter of 1863–64, in the grip of a lengthening war whose end no one could clearly see.

Excerpted from HYMNS OF THE REPUBLIC: The Story of the Final Year of the American Civil War, by S.C. Gwynne. Copyright © 2019 by Samuel C. Gwynne.  Excerpted with permission by Scribner, a Division of Simon & Schuster, Inc.