Stephan Kieninger is an Independent Historian and the author of The Diplomacy of Détente. Cooperative Security Policies from Helmut Schmidt to George Shultz (London: Routledge 2018) and Dynamic Détente. The United States and Europe, 1964-1975 (Rowman & Littlefield: Lanham 2016). 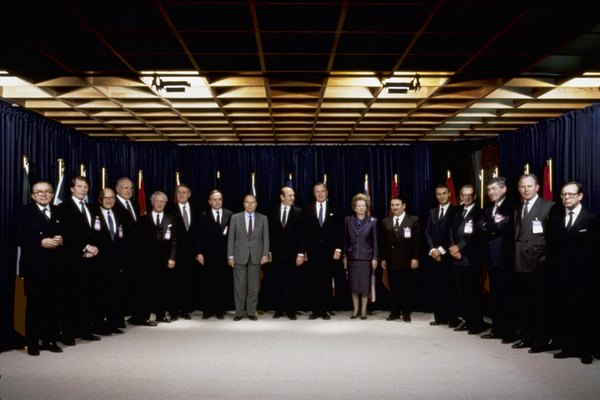 NATO is not brain-dead as President Emmanuel Macron of France has recently claimed. The alliance is vital for our security. On November 20, 2019, in response to Macron’s claim, Germany’s Foreign Minister Heiko Maas emphasized that “NATO has for the last 70 years been Europe’s life insurance.”(1) Maas suggested stronger political ties to improve NATO’s cohesion as a way to adjust the alliance to the current challenges we face.

Debates over NATO’s purpose are not new. The alliance has always managed to adapt in times of challenges. Thirty years ago, NATO witnessed one of its finest hours: On December 4-5, 1989, NATO leaders met in Brussels for their first summit after the fall of the Berlin Wall. Their discussions had bold significance: Their meeting signaled that NATO was determined to play the pivotal role in the emergence of Europe’s new security architecture. President George H.W. Bush saw NATO as the core for the “future shape of the new Europe and the new Atlanticism.”(2)

From a German vantage point, the key outcome of the Brussels Summit was President Bush’s full support for Germany’s unification. Bush argued that NATO’s policy should be based on four key principles: Self-determination, Germany’s commitment to NATO, general European stability, and support for the principles of the Helsinki Final Act.America’s leadership was essential for Europe’s transformation. The Europeans needed the United States as a power broker and alliance manager at a time when the Soviet Union as the external enemy had disappeared.(3) Without NATO and without American troops in Europe, the European states would lapse into a security competition among themselves. The disastrous European Council Summit in Strasbourg on December 8-9, 1989 revealed rifts and mistrust: Margaret Thatcher, Italian Prime Minister Giulio Andreotti and Dutch Prime Minister Ruud Lubbers attacked Chancellor Kohl for his bold initiatives to achieve unification. As a high-level European argued, “it is not acceptable that the lead nation be European. A European power broker is a hegemonic power. We can agree on US leadership, but not on one of our own.”(4)

Unified Germany was a potential source of instability. Its NATO membership was the best way to contain it and to keep it integrated in the West. Bush and Kohl discussed Germany’s unification on the eve of NATO’s Summit when Kohl pointed out that “everyone in Europe is afraid of two things: (1) that Germany would drift to the East – this is nonsense; (2) the real reason is that Germany is developing economically faster than my colleagues. Frankly, 62 million prosperous Germans are difficult to tolerate – add 17 million more and they have big problems.”(5)

Bush used his intervention at the outset of the December 1989 NATO summit to set the tone and to lay out a blueprint for a strengthened NATO, buttressed with additional political responsibilities. NATO would remain North America's primary link with Europe. Bush encouraged the European allies to build a united Western Europe within an Atlantic framework, thereby sustaining US leadership. He emphasized that NATO’s task was “to consolidate the fruits of revolution and to provide the architecture for continued change.”(6) The promotion of greater freedom in Eastern Europe was a basic goal of NATO’s policy. At the same time, NATO’s primary role would continue to be security and deterrence. The Soviet Union still posed a major military threat, and it was unpredictable whether Gorbachev’s reform policy in the Soviet Union would eventually prevail.“I pledge today that the United States will maintain significant military forces in Europe as long as our Allies desire our presence as part of a common security effort. The U.S. would remain engaged in the future of Europe and in the common defence. This was not old thinking but good thinking”, Bush said.(7)

The December 1989 Summit also paved the way for NATO’s transformation into a more political alliance. NATO had to reinvent itself politically for the initial challenges of the post-Cold War era. NATO’s aim was to work for a Europe whole and free and to create an enduring peace on the continent. NATO’s enlargement was part of this endeavor. The current scholarly debate about NATO enlargement often views NATO exclusively through a Russia prism and overlooks that NATO’s outreach to the East was preceded by a rebalancing within the West related to Germany’s role in NATO. Unified Germany became America’s strategic partner toward Central and Eastern Europe and the Soviet Union’s successor states. At the same time, one of NATO’s key functions still pertained to the containment and integration of Germany. NATO Secretary General Manfred Woerner reiterated that it was a “historic task […] to protect the Germans from temptation, Europe from instability, and safeguard those elements that have made a new Europe possible.”(8)