The Real Alexander von Humboldt: A Scientist of the Romantic Age

MAREN MEINHARDT works at the Times Literary Supplement in London, where she is the editor for Anthropology, German Literature, and Science. She studied psychology and literature at the London School of Economics and the University of Sussex. Her spare time is spent trying to locate wild and unexplored nature outside London. 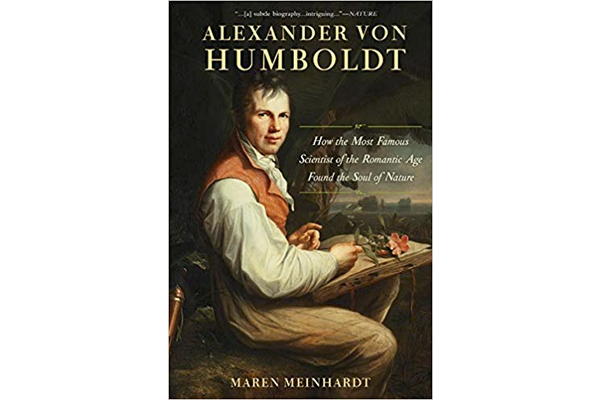 Alexander von Humboldt was born 250 years ago this fall. As his legacy is celebrated across the globe, I continue to be struck by the grandiose claims that are made about him in the existing literature. The narrative that emerges is of an intrepid explorer, striding out to accomplish a range of spectacular, almost superhuman achievements, in a life dedicated to the single-minded pursuit of scientific endeavour.

Looked at more closely, though, things appear a lot less straightforward. Humboldt’s most celebrated achievement is his ascent of the Chimborazo – believed, at the time, to be the highest mountain on Earth. While this was an astonishing feat, the fact remains that the Chimborazo was not the tallest mountain in the world at all. Further, Humboldt had to turn around at around 5,600 meters and failed to reach the summit.

Another claim is Humboldt’s supposed discovery of the Casiquiare Canal, an undiscovered waterway linking the great water systems of the Orinoco and the Amazon. The Casiquiare, however, wasn’t undiscovered. Not only did local people know about it and use it for trade, but Europeans already knew of itas early as 1745 when the explorer Charles Marie de la Condamine informed the Academie française of its existence.

Humboldt almost invented the electric battery– in fact, he came very close. Except that he didn’t actually invent it. That was Alessandro Volta. Humboldt used the Voltaic pile – two different metals in an electrolytic salt solution – but it was inadvertently, and he only realized later how close he had been.

He did invent isotherms– the idea of linking the points of equal temperature across the globe. They are still in use today – they are the lines we’re used to seeing on weather maps – but, somehow, this feels like a bit of a meagre fruit of a scientific approach that was based on measuring, and comparing, everything possible.

A closer look at Humboldt’s letters dismantles the idea of a superhuman figure, one whose life consists of a series of triumphs that we can only marvel at from a distance. Humboldt’s life was guided by a different underlying principle: that of German Romanticism.

One of the defining characteristics of early German Romanticism is the urge towards transcending boundaries. This translates into a seeking out of the open-ended and the unfinished, and, conversely, a rejection of all that is known and clearly demarcated. Humboldt’s motivation was personal at least as much as it was scientific, growing out of a Romantic instinct towards the undefined, the wide and the open.

So instead of setting out for a particular destination, on a strictly planned course of scientific exploration, Humbodt’s journey was, to a remarkable extend, shaped by chance: First, Humboldt was hoping to go to Italy. When this was thwarted by Napoleon’s Italian campaigns, he aimed for the West Indies instead. This was followed by plans to travel to Egypt, to Morocco, and even to the South Pole. Even as he was on a ship bound for South America, he believed that his destination would be Cuba– it was an outbreak of typhus on board the Pizarro, the ship he was travelling in, that decided him to embark at Cumaná. Later, there was a plan to sail to the Philippines. Humboldt would have gone anywhere: “I would have sailed to the remotest South Seas, even if it hadn’t fulfilled any scientific purpose whatever”.

Another clue to the strong Romantic impulse that propelled him is the type of thing Humboldt noticed on his travels, and thought worth noting down. For a scientist who had the methods of the Enlightenment at his disposal, and used them with great competence, even virtuosity, I found myself astonished by some of them. In the beginning especially, he tended to see everything through eyes that were not only Eurocentric, but also schooled by German Romanticism.

The Rio Manzanares, just outside Cumaná, for example, was “very like the river Saale near Jena”. The mountain range in Venezuela that separated the coast from the interior reminded him of Switzerland and the Tyrol – he actually called it “the American Alps”. And looking down from it towards the coast, he thought the landscape was “just like the background of the Mona Lisa”.

Sometimes, the landscape evoked is a very specific one, and one heavily associated with Romanticism. A stretch of landscape near the Orinoco reminded him of a particular area near Bayreuth – the setting of Jean Paul’s Romantic novel Siebenkäs. Lake Valencia, in Venezuela, struck him as just like Lake Geneva – with a rock face calling to mind the precise scene in Jean-Jacques Rousseau’s La Nouvelle Heloise where Saint-Preux and Julie almost come to grief.

So what was it that Humboldt was looking for? Humboldt imposed Romanticism on what he found, but this relationship was to be a reciprocal one. He wanted the New World to make an impression on him, too, and to be changed in turn.

It is that desire that was most succinctly expressed by Goethe, in his book Elective Affinities, written after Humboldt’s return from the Americas. Goethe makes one of the characters, Ottilie, refer to Humboldt before stating that “no one can walk beneath palm trees with impunity”. And Humboldt certainly didn’t want to. What he wanted is, again, perfectly expressed by Ottilie: “Doubtless, his tone of thinking becomes very different in a land where elephants and tigers are at home”. I think this is exactly what Humboldt was setting out to do.

It is almost with triumph that he writes home, to his botanist friend Willdenow, who is moored in Berlin with wife and child: “How fortunate you are to not see these impenetrable forests on the Rio Negro, these worlds of palm trees – it would seem impossible after that to get used to a pine wood again”. He wanted for the tropics to have left a mark on him – and so is at pains to emphasise that they had had a physical, measurable effect on him: he is, he reports, browner, fatter, happier. On the Orinoco, he persuaded some local men he encountered to paint his face to match theirs, only to then find that the colour couldn’t be washed off – as he writes, with satisfaction, it seems to me, in a footnote. And he has been cured of the sickliness that has dogged him since his youth (there was a whole range of intriguing illnesses: a swollen cheek, a slime fever) – on his travels, he boasted, he never had “even have as much as a headache”.

I share with Humboldt an aversion of building pedestals and putting people onto them. In fact, when there was a plan to erect a bust in Humboldt’s honour, he instinctively recoiled: “dreadful news!”, he said, and protested that if it were to come to pass, it should distress him so much, that it would stop him from working for months.

Putting people on pedestals, beyond the reach and understanding of lesser mortals, does not help us understand them better. If, perhaps, we lose a hero, we may gain, in Humboldt, an extraordinary scientist who was affected by the extraordinary times he lived in – and, most importantly, a fellow human being who allows us to look him in the eye.