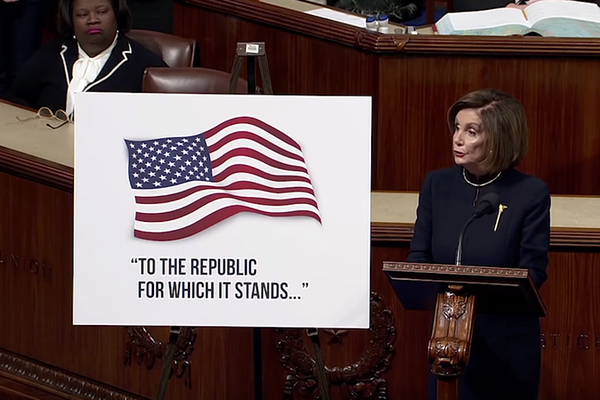 Why is the House of Representatives impeaching President Donald Trump for abuse of power and obstruction of Congress? The shock and sadness I feel over the fact that the Congress will not impeach the President based on a statute or a breach of the Constitution per se, but on the two flimsiest, most generic charges possible is profound. The Democratic majority in the House is about to mortally wound the Republic as we know it. As a historian and political theorist, I believe there is no way the American system of government can recover from an impeachment on these grounds.

Many scholars argue that our system of government is not modeled after Athenian democracy but rather Roman republicanism. The idea behind republicanism is called in political theory the ethics of non-domination.

Aristotle was denied citizenship in Athens his whole life just for being born in the wrong city-state. This left him craving political fairness, what we might call social justice. He argued that where the powerful and wealthy ruled, justice was denied to the poor and the politically and socially marginalized. However, he also believed that when the masses of people, led by demagogues amongst the wealthy, were given full reign, the wealthy and powerful were denied justice. He believed, at that time almost alone, that equal justice for all regardless of power levels, status, or ability, was essential to justice, social or otherwise.

He rejected the rule of man, or the rule of people. Arguing that only the law should rule, Aristotle believed that no matter who ruled, everyone had certain basic rights and that institutions needed to balance each other out to ensure than no one person or interest group prevailed permanently and systematically over any other. Ultimately, equal protection under the law and due process, as well as the idea of res publica (the public thing) were incorporated into the idea of polity ora republic.

Aristotle influenced many great thinkers in both the Northern European and Southern European traditions. He also deeply influenced the Founders, including James Madison, John Jay and Alexander Hamilton who wrote the Federalist Papers.

Aristotle and Rome, the two models that gave us the ethics of non-domination, checks and balances, and republicanism, were defeated by the same foe: political polarization. Political parties in ancient times were not formal, but they were what James Madison in Federalist No. 10. called “factions.”

Aristotle was forced to flee Athens because he was viewed as the “enemy” by the faction in control in Athens, a group reminiscent of modern-day progressives. They argued against the rule of law in the Aristotelian sense and wished to punish the wealthy and powerful just because they were of the “other faction.” The poor and their demagogic leaders, as they had done before, demanded progress at any cost or political freedom for none. They received the latter.

By contrast, the Roman Republic collapsed for many reasons, but political polarization and the resulting break down in the rule of law were the main culprits. In133 BC, a man named Gracchus, leading a progressive faction promised to seize public land controlled by wealthy Romans and redistribute it without compensation. In order to prevail, Gracchus was prepared to violate the rule of law to win. The Senate ordered a consul, sort of a co-president, to kill Gracchus without due process. Instead, a Senatorial mob murdered Gracchus and got away with it.

The Senate ordered Gracchus killed because of unproven rumors within its faction that he wanted to make himself an absolute monarch. Essentially, they accused him of abuse of power and contempt of the Senate. While Gracchus’ radical plans would have harmed the stability of the Republic, it was the Senate’s overreaction that truly devastated the Roman republic.

I believe this history is entirely relevant to this exact historical moment. Right now, one house of Congress, based on flimsy evidence, is about to charge the President with abuse of power and contempt of Congress, hoping that his power and his faction will be destroyed by his impeachment and eventual removal.

This scenario is exactly opposite to Gracchus in Rome, but the result will be the same. Here progressives are trying to destroy a conservative leader viewed as a prospective tyrant. The American republic, if it has not already done so, will enter inexorable decline, just as the Roman Republic did in 133 BC. Destroying or trying to destroy a legitimately elected, but distasteful president in an unconstitutional manner will ultimately subvert the constitutional order, as the senators found out after they had Gracchus murdered. In other words, trying to support the Constitution by abusing power is like trying to snuff out a small fire by burning your house down.

The founders did not mean that the abuse of power outside of a legal or constitutional breach would be impeachable. The articles of impeachment that have come out do not cite any statute or part of the Constitution, except the prerogatives of Congress. In other words, Congress, the House in particular, seeks to abuse its power to correct what it views to be abuses of power. Ironically, this time, the Senate will impede the constitutional breach rather than exacerbate it as the Roman Senate did. However, if impeachment is not defeated, a bad precedent will be set, one which will speed the decline of the republic.