by Khrystyna Karelska and Andreas Umland

Khrystyna Karelska is an alumna of the College of Europe in Natolin and Democracy Study Centre in Kyiv. She is a student of the East European Multiparty Democracy School and an intern-analyst of the Public Association “Community Associations”in Odesa.

Andreas Umland is a Nonresident Fellow at the Center for European Security of the Institute of International Relations in Prague, and General Editor of the book series “Soviet and Post-Soviet Politics and Society” and “Ukrainian Voices.” 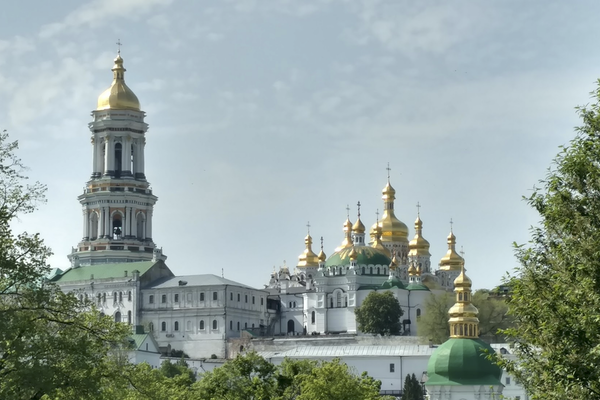 In recent months, the ongoing Russian-Ukrainian multidimensional military, political, economic and cultural conflict has become an issue with which most people around the world are now familiar with. What is less well known beyond Eastern Europe is the important religious aspect of Moscow’s “hybrid war” against Ukrainian national independence. According to its Constitution, Ukraine is, to be sure, a secular country where churches and all religious organizations are separated from the state. On the other hand, Ukraine is one of the most religious countries in Europe, and has a Christian church whose history reaches back more than a millennium.

The origins of Ukrainian Orthodoxy date back to the Middles Ages when Prince Volodymyr the Great of Kyiv received Christianity from Constantinople in 988. The baptism of the Kyivan Rus was one of the crucial events in early Ukrainian history. It helped create a first proto-national community out of which today’s modern Ukrainian nation would later emerge.

Eastern Christianity heavily influenced the rise of the first Eastern Slavic state, the Kyivan Rus, on the territories of today central and northern Ukraine, eastern Belarus as well as western Russia. Later on, Orthodoxy in Eastern Europe transformed, however, from a medium of cultivation and unification into an instrument of domination and subversion. Increasingly reimagining itself as an empire, Tsarist Russia used the Orthodox church to justify and implement its control over Ukraine and Belarus.

Against this background, the last almost three decades since Ukraine’s independence were marked by a fight of the Ukrainian Orthodox Church of the Kyiv Patriarchate (UOC KP) and Ukrainian Autocephalous Orthodox Church (UAOC) against the dominance of the Ukrainian Orthodox Church of the Moscow Patriarchate (UOC MP) in Ukraine. This confrontation has political undercurrents as the UOC MP is – in spite of its official name – de facto a branch of the Russian Orthodox Church (ROC) which, in turn, is a manifestly national (rather than pan-national) church that is unofficially, but closely linked to the Kremlin. As such, the ROC and UOC MP were and are today important soft-power instruments in the Kremlin’s hybrid warfare against Ukraine. They are a major medium for Moscow’s foreign policy and facilitate the Kremlin’s neo-imperial schemes under such headings as “Orthodox civilization,” “Russian World,” or “Eastern Slavic brotherhood.”

In 2014, the so-called “Ukraine crisis” began. This is the common, but misleading label for the war that broke out as a result of Russia’s illegal annexation of Crimea and covert intervention in the Donets Basin. Since then, the question of religious independence from Russia has become more pressing than ever for many Ukrainians. As a result of prolonged negotiations, in January 2019, the Ecumenical Patriarch of Constantinople Bartholomew I. handed to a Ukrainian delegation in Istanbul a so-called Tomos (literally: little book), i.e. an official document that grants canonical independence to the newly-established unified Orthodox Church of Ukraine (OCU). This was a major achievement not only for Ukraine’s religious autonomists. It was also a historic success of the Presidency of Petro Poroshenko whose team had, since 2016, done most of the diplomatic work in preparation of Constantinople’s momentous move.

The Russian reaction to this historic act was expectedly vitriolic and full of conspirology. Already before the finalization of Constantinople’s move in early 2019, among many others, Patriarch Kirill of the Russian Orthodox Church condemned, in late 2018, with anger and hyperbole Ukraine’s forthcoming autocephaly: “The concrete political goal was well-formulated by, among others, plenipotentiary representatives of the United States in Ukraine and by representatives of the Ukrainian government themselves: it is necessary to tear apart the last connection between our people [i.e. the Russians and Ukrainians], and this [last] connection is the spiritual one. We should make our own conclusions [concerning this issue] including on the tales which [the West], for a long time, tried to impose on us, during so many years, about the rule of law, human rights, religious freedom and all those things which, not long ago, were regarded as having fundamental value for the formation of the modern state and of human relations in modern society. Ukraine could become a precedent and example for how easily one can do away with any laws, with any orders [and] with any human rights, if the mighty of this world need it.”

The new Metropolitan of the Orthodox Church of Ukraine (OCU) Epiphanius responded to these and many other Russian attacks as he said that the “the Russian Orthodox Church is the last advance post of Vladimir Putin in Ukraine,” and that the “appearance of the OCU undercuts the imperial goals of the Kremlin leader. Putin is losing here in Ukraine the support which he had before because if he had not had this support, there would not have been a war in the Donbas. And therefore, we will consistently maintain ourselves as a single church – recognised and canonical in Ukraine. And gradually Russia will lose this influence through the souls of Orthodox Ukrainians here."

To be sure, the acquisition of canonical independence of the newly established Orthodox Church of Ukraine was not only a church matter and source of division between Russia and Ukraine. It also played a role in Ukrainian domestic affairs, and, in particular, in the Ukrainian presidential elections of 2019. On the day of Epiphanius’s enthronization on February 2, 2019, then President Petro Poroshenko stressed that the OCU is and will be independent of the state. At the same time, he stated that “the church and the state will now be able to enter onto a path toward genuine partnership of the church and state for joint work for the good of the country and the people."

Representatives of the new OCU repeatedly assured that the state does not meddle in religious affairs, but merely contributed to the unification process. Yet, former President Poroshenko actively presented Ukraine’s acquisition of autocephaly as his political victory vis-à-vis Russia during his 2019 election campaign, and even went on a so-called Tomos-tour through Ukraine. While such manifest political instrumentalization spoiled the acquisition of Ukrainian autocephaly, the OCU’s independence is not a mere side-product of political maneuvering by Ukraine’s former President. It is the result of a decades long struggle of many Ukrainian Christians against the dominance of the UOC-MP and of aspirations of many Orthodox believers in Ukraine.

According to American theologian Shaun Casey, Ukraine’s Tomos, i.e. her obtainment of autocephaly for her Orthodox church, will lead to unification around the OCU and give new opportunity to deal with religious diversity. Among others, Archimandrite Cyril Hovorun has emphasized that Ukraine’s acquisition Constantinople’s Tomos is a move that corresponds to the general structure of the world-wide religious Orthodox community, and national character of the individual Eastern Christian churches. Unlike in the centralized and pyramidal structure of the Catholic Church with the Pope at its top, Orthodoxy is divided into local churches and constitutes an international Commonwealth rather than unified organization.

The ongoing dominance of an Orthodox Church subordinated to Moscow rather than Kyiv on the territory of independent Ukraine had thus always been an anomaly. It became an absurdity once Russia started a war against Ukraine in 2014. Therefore, Ukraine’s acquisition of autocephaly for its Orthodox church can be viewed as an opportunity to heal the schism between the various Eastern Christian communities on Ukrainian territory, and to eventually unite most Orthodox believers living in Ukraine.

For that to happen, the international recognition by other Orthodox churches is crucial as it legitimizes the young OCU in the Eastern Christian world. So far, only the Patriachate of Alexandria and the Standing Synod of the Church of Greece have officially recognized the canonical independence of the OCU. Even these were contested decisions. The former Greek Defence Minister Panos Kammenos called it a crime: “If anything happens in the next few months, the Holy Synod [of the Greek Orthodox Church] will hold all responsibility for the termination of guarantees granted by Russia, due to the recognition of the illegal Church of Ukraine.”

In contrast to Greece’s Holy Synod, the Serbian Orthodox Church, a close ally of the ROC, has made publicly clear that it will not recognize the OCU. It follows Moscow’s line when claiming that “the Kyiv-based Metropolia cannot be equated with current Ukraine as it has been under the jurisdiction of the Moscow Patriarchate since 1686." Events in Ukraine have gained additional meaning in the Western Balkans as Montenegro – NATO’s most recent new member – is currently discussing a contentious religious bill that enables the state to confiscate property of the Serbian Orthodox Church. The latter has, in response, blamed Kyiv for this development: “It appears that recent events in Ukraine, where the previous authorities and Constantinople Patriarchate legalized the schism, are currently repeated in Montenegro. Schismatics should confess and achieve reconciliation with the Serbian Orthodox Church."

Reacting to recent developments in Ukraine, Greece and former Yugoslavia, Moscow’s Patriarch Kirill warns now that “new work will now be done to strengthen Orthodoxy's canonical purity, and even greater efforts made to preserve and restore unity where this has been shaken." OCU’s Metropolitan Epiphanius at Kyiv, in contrast, predicts that, in the near future, “at least three or four more churches will recognize our autocephaly.”

Such radical statements are due to the fact that the OCU’s independence has the potential to change the balance of influence in the entire Orthodox world. Representatives of several other Christian and non-Christian religions have welcomed the emergence of a canonical and independent Ukrainian Orthodox church in 2019. The partly harsh rejection of the OCU by a number of Russian and pro-Russian Orthodox hierarchs has largely to do with the Moscow-dominated power relations in the international network of Eastern Christian churches that are under threat. The emergence of a potentially large competitor in Eastern Europe could encourage certain other local churches currently under the Moscow Patriarchy to follow Ukraine’s example.

Religion will remain an important factor in the ongoing conflict between Russia and Ukraine, and divide world-wide Orthodoxy as long as Moscow does not recognize Ukrainian autocephaly. The emergence of the OCU and its growing recognition among other local Orthodox churches will impact profoundly the post-Soviet and other regions of the world. It will probably provoke Moscow towards even harsher actions as the Kremlin is gradually losing a vital instruments of its hybrid warfare against Ukraine. While autocephaly has been an aim for many Ukrainian Christians for centuries, Constantinople’s 2019 Tomos for the OCU is perceived, in- and outside Ukraine, as a highly symbolic answer to the Russian military attack on Ukraine – an aggression of one largely Orthodox people against another. Against this geopolitical background, the OCU’s acquisition of autocephaly undercuts the crypto-imperial mood in the Moscow Patriarchy.

This article is an outcome of a project within the 2018-2019 Democracy Study Center training program of the German-Polish-Ukrainian Society and European Ukrainian Youth Policy Center, in Kyiv, supported by the Foreign Office of the Federal Republic of Germany. #CivilSocietyCooperation. Umland's work for this article benefited from support by "Accommodation of Regional Diversity in Ukraine (ARDU): A research project funded by the Research Council of Norway (NORRUSS Plus Programme)." See blogg.hioa.no/ardu/category/about-the-project/.