Why Trump Is Different than Reagan, Either Bush, Dole, McCain, or Romney—He’s Evil

Walter G. Moss is a professor emeritus of history at Eastern Michigan University and a Contributing Editor of HNN. For a list of his recent books and online publications click here. His most recent book is In the Face of Fear: Laughing All the Way to Wisdom(2019), which treats humor from a historical perspective. 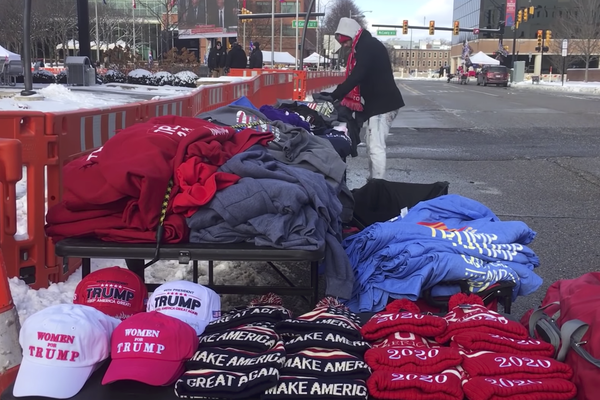 If we look at Republican candidates for president over the last forty years, we find one significant difference between Donald Trump and his party’s predecessors. Despite all of his forerunners’ failings, it would be a mistake to label any of them as evil. Mistaken or misguided at times? Yes. But evil? No. Even progressive leftists should admit that occasionally, and sometimes more than occasionally, the six pre-Trump Republican candidates displayed moments of basic human decency.

A few definitions of evil are “profoundly immoral and wicked” and “something that brings sorrow, trouble, or destruction.” Doesn’t that fit Trump?

Several months ago, Michael Sean Winters, who “covers the nexus of religion and politics” for the National Catholic Reporter, wrote of “the seven deadly sins of Donald Trump.” One after another, the author ticks them off—greed, lust, gluttony, sloth, envy, wrath, and pride—and comments, “What we see with President Donald Trump and his cast of sycophants and co-conspirators . . . is a rare thing: All seven deadly sins on display at once.”

Winters observes that “greed has long been a motivating factor in Trump's life.” Since becoming president he has added greed and lust for power to his long-time pursuit of money and fame and his lust for women—the author just mentions in passing “that horrible tape,” where Trump (in 2005) stated he was able to  grab women “by the pussy.” And no mention is made of the some 23 women who since the 1980s have accused Trump of various types of sexual misbehavior including rape. “The evidence of gluttony is an extension of his greed and lust for power: He not only wants power, he can't get enough of it. Never enough money. Never enough women. Never enough wives. Like all gluttons, he leaves a mess in his wake.” Sloth? “As president, he famously can't be bothered reading his briefing papers,” and as of late October, 2019, President “Trump had 224 golf outings.” Regarding all his mentions and put-downs of President Obama, “it must be envy.” As for wrath, Winters predicted “we will see more and more wrath in the coming months.” And sure enough we did in early February, at the 68th annual National Prayer Breakfast (see below) and with the firing of two men who testified against him in impeachment hearings. Finally, we come to pride, “the deadliest of the seven deadly sins.” “What astounds, really, is that Trump's pride is the pride of the con man. He is proud of his ability to make people think he is a man of abilities when he really is a man of few gifts beyond those we associate with showmanship.”

In earlier HNN articles (see, e.g., this one of mid-2016), I have criticized Trump for his colossal egotism and lack of humility, a virtue that Winters identifies as pride’s opposite. Many others concerned with ethics have also commented on it, as conservative columnist David Brooks did in 2016 when he wrote that Trump’s “vast narcissism makes him a closed fortress. He doesn’t know what he doesn’t know and he’s uninterested in finding out. He insults the office Abraham Lincoln once occupied by running for it with less preparation than most of us would undertake to buy a sofa.”

Brooks once taught a course at Yale on humility, and his most recent book is The Second Mountain: The Quest for a Moral Life (2019). Conservative Trump critics Michael Gerson and Peter Wehner also wrote a book on morality entitled City of Man: Religion and Politics in a New Era (2010).In February 2019, Gerson delivered a requested sermon in Washington’s National Cathedral. Wehner remains a Senior Fellow at the Ethics and Public Policy Center.

More recently Gerson wrote the essay “Trump’s politicization of the National Prayer Breakfast is unholy and immoral.” Trump used“a prayer meeting to attack and defame his enemies,” and “again displayed a remarkable ability to corrupt, distort and discredit every institution he touches,” Gerson observed. Now, after the Senate impeachment trial, Trump “is seized by rage and resentment,” and “feels unchecked and uncheckable.” Gerson also warned that Trump has “tremendous power,” and “we are reaching a very dangerous moment in our national life.”

About a week before Gerson’s article appeared, The Atlantic ran Peter Wehner’s much longer essay,“There Is No Christian Case for Trump.” Much of it deals with the impeachment charges against Trump and his wrongdoing regarding Ukraine, but Wehner also quotes favorably a December editorial by Mark Gali in “the evangelical world’s flagship publication, Christianity Today”: “[Trump] has dumbed down the idea of morality in his administration. He has hired and fired a number of people who are now convicted criminals. He himself has admitted to immoral actions in business and his relationship with women, about which he remains proud. His Twitter feed alone—with its habitual string of mischaracterizations, lies, and slanders—is a near perfect example of a human being who is morally lost and confused.”

Columnist Ross Douthat is still one more conservative religious critic of Trump. Author of a critical study of Pope Francis, Douthat has had this to say about our president: he is a “debauched pagan in the White House,” and he is “clearly impaired, gravely deficient somewhere at the intersection of reason and judgment and conscience and self-control.”

Among writers who are less conservative than Brooks, Gerson, Wehner, and Douthat, comments about Trump’s evilness is even more widespread. To take just one example, we have Ed Simon, a HNN contributing editor. In an earlier article on Trump’s “religion,” I quoted Simon, “If the [Biblical] anti-Christ is supposed to be a manipulative, powerful, smooth-talking demagogue with the ability to sever people from their most deeply held beliefs who would be a better candidate than the seemingly indestructible Trump?”

All of the above comments indicating Trump’s evils do not exhaust the list, and just a few should be amplified upon or added. 1) He is a colossal liar. As The Washington Post stated, “Three years after taking the oath of office, President Trump has made more than 16,200 false or misleading claims.” 2) He lacks empathy and compassion. For example, in late 2015, he mocked a journalist's physical disability. 3) His boastful remarks about himself are examples of delusional pride—e.g., “in my great and unmatched wisdom,” and “I have a great relationship with the blacks." 4) Although it’s no easy job to identify Trump’s worst sin, his greatest may be what he is doing to our environment.

Any article dealing with Trump’s evil must contend with the overwhelming support he receives from Evangelicals. Why this is so and why they are wrong is dealt with by Wehner’s essay mentioned above. Also, although most evangelicals are conservative and support Trump, there are “progressive evangelicals,” who believe “the evangelical establishment’s embrace of Trumpism—unbridled capitalism, xenophobic nativism, and a willingness to engage with white supremacy—goes against everything Jesus stands for.”

Finally we come to the question, “Does a president’s morals matter?” Did not John Kennedy and Bill Clinton engage in adulterous and/or inappropriate sexual behavior? Was the more upright Jimmy Carter a better president than these two? For all the “trickiness” of “Tricky Dick” Nixon and the shame of Cambodian bombing and Watergate, did he not pursue effective detente policies toward the USSR and Communist China?

The answer is presidential morals do matter, but only somewhat—though more than we realized until Trump demonstrated how costly their absence can be. Political wisdom, which itself requires certain virtues, is important, but so too are other skills like interpersonal and administrative ones.

Some historians have written of the importance of presidential values and virtues. FDR biographer James MacGregor Burns maintains that “hierarchies of values . . . undergird the dynamics of [presidential] leadership,” and “considerations of purpose or value . . .lie beyond calculations of personal advancement.” Focusing on Presidents Lincoln, the two Roosevelts, and Lyndon Johnson, Doris Kearns Goodwin writes that the four presidents were “at their formidable best, when guided by a sense of moral purpose, they were able to channel their ambitions and summon their talents to enlarge the opportunities and lives of others.” Ronald Feinman has stated that “the most significant factor” in rating presidents’ greatness “is when they demonstrate moral courage on major issues that affect the long term future.” But he, as well as presidential historians Robert Dallek and Michael Beschloss, have commented on Trump’s lack of positive values and unfitness for office.

Still, in the midst of primary season, much of the political talk is about various candidates proposed policies and whether they would be better or worse than what Trump has delivered and promises. “Medicare for all?” “Free public college tuition?” “More or less government regulation?” Etc. Etc. But we are missing the major point. Like Trump’s six previous Republican presidential candidates (and like many Trump supporters), all of the major 2020 Democratic candidates are decent human beings. Trump is evil. He is a liar, hatemonger and polarizer who has little knowledge of, or respect for, America’s traditions and better political values. Unable to tolerate criticism, he increasingly surrounds himself with flatterers and toadies.

In Episode 8 of the second season of the HBO series “Succession,” Logan Roy’s brother says this about the media tycoon, “He's morally bankrupt. . . . In terms of the lives that will be lost by his whoring for the climate change deniers, there's a very persuasive argument to be made that he's worse than Hitler.” I thought not only about Rupert Murdoch, head of the media conglomerate that runs Fox News, but also of Trump. For many, now and in the future, the 2020 presidential election may not just be an ordinary U.S. election, but quite literally a matter of life or death.