An Interview with Fergus Bordewich, Author of “Congress at War”

In his new book Fergus M. Bordewich reveals the key role the Radical Republican leadership played in organizing and financing the Civil War. Bordewich is the author of seven previous history books including The First Congress and Washington: The Making of the American Capital. 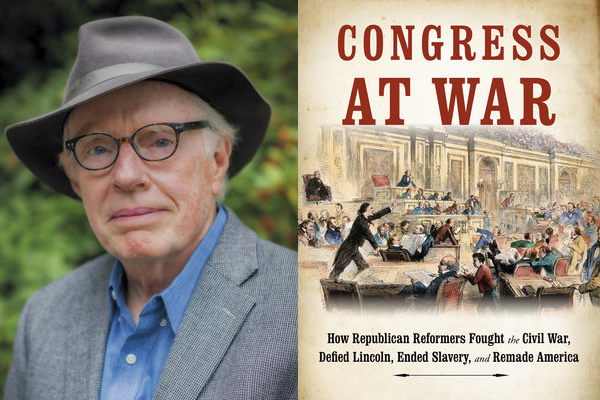 James Thornton Harris: This is your fourth book about the workings of the U.S. Congress. What drew you to this topic? Why not just write single-subject biographies?

Fergus M. Bordewich: I like working with an ensemble of characters, which enables me to explore a wider and arguably more complex range of factors that shaped an age, or in the case of the Compromise of 1850, an event. While I have immense respect for the biographer’s art, I don’t think that any single person offers a refined enough lens to illuminate an entire era. For years, I have toyed with writing a biography of John C. Calhoun, who was a fascinating if politically very destructive man, but I’ve never gotten around to it.

In reading your book I was struck by some parallels to the current Congress. We have a Republican President, elected with less than 50% of the popular vote and a Republican Senate.  You don’t make any specific references to the current president in your book, but I many readers may make the comparison themselves. Did the election of President Trump in 2016 play a role in your decision to write about the Civil War Congress?

I was already researching Congress at War when the election took place, and I had been thinking about it for years. I had always wanted to write a Civil War book; several of my forbears took part in the war, and I had been raised with their stories. But I am essentially a political historian and not a military one, though I read a considerable amount of military history.

My work on Congress during the Compromise of 1850 showed me how much wonderful untapped and dramatic material there was to be found in the battles fought on the floor of Congress; I had also come to feel that congressional history had been sorely neglected for generations as historians focused on the presidency. Finally, Congress at War allowed me to write about the political culmination of the abolitionist movement and the triumph of emancipation, which I addressed in Bound for Canaan, a history of the Underground Railroad.

If there is a message for our own time in my current book, it is an implicit argument for renewed respect for Congress and more broadly for the complex processes of our republican form of government.

You chose to focus on four legislators (Rep. Thaddeus Stevens, Senator Ben Wade, Senator William Pitt Fessenden and Rep. Clement Vallandigham).  Vallandigham is often depicted as a villain or saboteur of the Union, but I found your portrait to be more nuanced. Why did you choose him to be one of your lead characters?

I needed a character to represent the Copperheads, the wing of the Democratic Party that opposed the war and Lincoln. Vallandigham stands out as the acknowledged leader of that faction: he was articulate, passionate, ambitious and sincere, though he was an intense racist and a borderline traitor. (I think he crossed the line.) He was also colorful, and therefore fun to write about.

Even if one admires the Radical Republicans and believes that the Union victory was imperative if the nation was to survive as a democracy, which I do, Vallandigham’s harassment by the federal government posed some troubling questions about the protection of First Amendment rights during wartime. Vallandigham was gerrymandered out of his seat in Congress and later expelled to the Confederacy for his views.

In the mid-19th century Congress, not the executive branch, was the main center of political power in the national government. Lincoln, as a former Whig, knew this, though under the pressure of the war he did assert presidential power more than his predecessors, except for Andrew Jackson. In the 19th century, no president came into office with his own agenda as presidents do today. Franklin Roosevelt set the modern template for the presidency, but it is a mistake to assume that previous presidents exerted power the way he did.

It is also true that Wade, Stevens and some of the other Radical Republicans did not fully trust Lincoln. They considered him too conservative. I should also say that Lincoln’s extraordinary character, his unusual moral depth, and his remarkable sensitivity have led us (understandably) to see him as the ever-dominant political force in the war, on the Union side. In fact, Lincoln was basically a learn-on-the-job president, a work-in-progress, who got better over time, but he was not a flawless executive and he by no means had the political field to himself.

Your book depicts a legislative body working under tremendous pressure to pass emergency bills as the country faces a crisis of unprecedented magnitude. One can see a parallel to our current Congress, which has had to pass emergency legislation to protect the economy during the current epidemic. Do you see any similarities between the Congress working in 1861 and the institution’s actions so far in 2020?

The Civil War congresses – the 37th and 38th – were extraordinarily effective, passing a prodigious amount of legislation including acts enlarging civil rights for African Americans culminating in the 13th Amendment, exerting constant pressure to fight the war more aggressively, financing the war, and achievements that are not usually thought of as “wartime” legislation, such as the Homestead Act, the Transcontinental Railroad, and the creation of the land grant colleges. Congress was able to accomplish this much because the eleven most reactionary states were out of the Union, having formed the Confederate States, and the Republican Party enjoyed overwhelming majorities in both houses of Congress.

While Congress faced no end of difficult challenges, it did not have to face today’s gridlock. The differences between then and now are far greater than the similarities. The Civil War Congresses are best compared to the First Congress of 1789-1791, the New Deal Congresses of the 1930s, and the Great Society Congresses of the 1960s, when in each case the nation’s more forward-looking party was free to legislate more or less as it wished. That said, even dominant parties never thought with one mind, and their battles of policy could be savage.

What current projects are you working on?

I am currently at work on a new book about the federal war against the Ku Klux Klan, in the early 1870s. Like my other books, it will be an ensemble story; it will toggle back and forth between the Klan’s violence in the South, where the army waged an ultimately successful campaign against KKK terrorism, and the political cockpit in Washington. President Ulysses Grant will loom large, along with pivotal members of Congress, both black and white, courageous freedmen, federal soldiers who fought the Klan to a standstill, and at least one of the Klan’s significant leaders.