Healing And Reconciling History 100 Years After the Elaine Race Massacre

J. Chester Johnson, who grew up white in southeast Arkansas but has lived most of his adult life in New York City, is the author of Damaged Heritage: The Elaine Race Massacre and A Story of Reconciliation (May 2020, Pegasus). 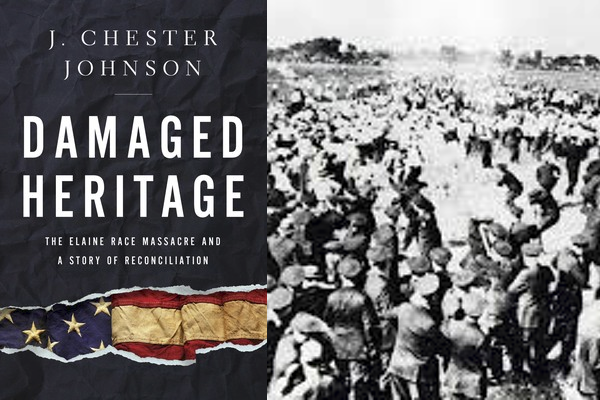 In 2014, having grown up white along the cusp of the Mississippi River Delta, I discovered that my grandfather Lonnie Birch, who had been my primary caregiver during the first five years of my life, participated in the 1919 Elaine (AR) Race Massacre, possibly the worst racial attack against African-Americans in our country’s history with more than a hundred – and perhaps hundreds – of black sharecroppers and their family members perishing.

Soon after I uncovered Lonnie’s participation in the Massacre, I acknowledged my attempt, as so many American whites, especially large numbers of white Southerners, had done before me, to lessen the effects of damaged heritage – in my case, as a legacy left behind, caused by my grandfather’s role in the terrible Elaine racial conflagration.

Damaged heritage is that essential feature of American white racism, consisting of evidence passed on to succeeding generations of ingrained, prejudicial traditions and customs, sometimes codified into law, historically combined with not infrequent, gratuitous, and even savage violence and repression, perpetrated by American whites against African-Americans. For some of us whites, damaged heritage has an added personal measure for which we are not responsible, such as Lonnie’s role in the Elaine Massacre, but with which we have to deal for family members we adored and who adored us (a multiplicity of repetitive factors includible in the idea of damaged heritage is set forth in my book).

For generations, if not centuries, white folks have shielded their damaged heritage through adoption of excessive veneration of the past and traditions, a feature Webster dubs “filiopietism”.  Both damaged heritage and filiopietism are serious components of continuing racism. Indeed, the combination of filiopietism and damaged heritage has created resistance to racial change, except for a demonstration by many American whites of the desire to return regressively to an earlier period of even greater black subjugation, and has inspired defensiveness and denial instead of an impulse toward acknowledgment and reconciliation.

While few American writers are his equal as a purveyor of filiopietism – the impact of historical mythologies brought forward in time--even William Faulkner understood the terrors and tragedy a combination of damaged heritage and filiopietism exerts: “No man can cause more grief than that one clinging blindly to the vices of his ancestors.”

For a time, I hid my damaged heritage behind a deep adoration and love I admittedly held for Lonnie, so that whenever writing about or discussing his participation in this race massacre, I referred to his “likely” role, even when I knew better. It was never “likely”. Indeed, from the very moment I made the solemn connection that all evidence showed he had been part of the white onslaughts in the rich cotton fields on the Arkansas side of the Mississippi River Delta in Phillips County, I had little doubt about Lonnie’s association, and yet, “likely” had its special, assuasive appeal.

However, based on my long-time rejection of the racist apparatus and factors that surrounded me during my youth, I simply could not let my feelings and familial attachment for Lonnie obviate the racist person he had so clearly been. He then became and thereafter remained two, distinctly separate, people – a dutiful and caring grandfather, but also, for a less welcomed memory, an abhorrent gunman who sought to kill African-Americans in a 1919 mass murder.

A revelation occurred to me at the end of the struggle concerning the person I wanted Lonnie to be. As a result of this personal reckoning, I came to grasp the ability for generations of whites to tolerate, for so long, the terrible treatment of blacks in America. The influence of damaged heritage on white racism bore little potent capability to exist without psychological cover from filiopietism, which has excused, camouflaged, and sufficiently inoculated damaged heritage throughout the entirety of our national history.

So, how do we American whites rid ourselves of the causes and consequences of racism, manifested through the coupled evils of damaged heritage and filiopietism? We humans are not born with racism as a natural result of who we innately are; rather, it is a trait we absorb as a condition of what we learn and have to unlearn if we are to free ourselves of this evil.

I like to think that the commonality between all humans – let’s call it the genuinely human – far outweighs any differences in custom, history, background, skin color, language, manners, and rituals. Unfortunately, meager differences between us have too often suggested to many whites the perfect reason for exclusion, separation, and isolation of others.

In early 2014, Robert Whitaker, author of a well-regarded book on the Elaine Race Massacre, proposed that Sheila Walker, a descendant of several Elaine Massacre victims, and I meet – progeny of victims and perpetrator. For the last six years, adoption of the genuinely human proved to be the path to racial reconciliation and abiding friendship between Sheila and me and between our respective families. This story is told in detail in my book.

Kierkegaard’s view that one generation cannot rely on a previous generation to learn the genuinely human warns us that filiopietism will inevitably embrace racism, in white America’s case, since that revered past casts African-Americans mostly in a perpetual state of human subjugation. Therefore, we whites have to be especially careful about those traditions to which we adhere, for, if we’re not, they can surely contain racist substance brought forward again and again.

Yet, we should also feel eagerly challenged that we alone can open ourselves to the genuinely human, not bound by those who come before or after us. Otherwise, we will be continually plagued, as a people, by the eternal “NO”, which we sometimes call “evil” or “sin” of which racism is a vicious, elemental part.