Jeff Kolnick teaches history at Southwest Minnesota State University. Kolnick is a founder of the Fannie Lou Hamer National Institute on Citizenship and Democracy and he served his faculty union, as a negotiator and as a local president. 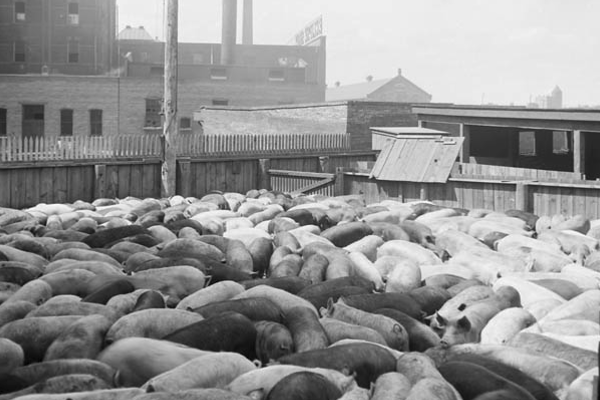 It is estimated that 80 percent of COVID-19 related the deaths in Minnesota have been linked to long term care facilities for the aged, and in six states that are reporting data, half of all deaths have been in similar institutions. Meanwhile, 6,500 meatpacking and food processing workers have caught COVID-19.  Twenty died from it. Three USDA meat inspectors have also died of the COVID-19 virus.

These stories are not unrelated. Over the last 40 years, the US has begun producing livestock and poultry in large confinement operations and then slaughtering the animals at lightning speed. At the same time, we have taken to warehousing our elders, who too often are confined in for-profit nursing homes.

And who among our elders wind up in nursing homes? They are the poorest among us, who have neither the wealth to spur economic growth with their purchases nor the capacity to work for wages. Like the packinghouse workers who face the virus on the front lines, our elders in nursing homes are being revealed as disposable people.

Who takes care of our elders? They are low wage workers, not unlike those who cut up our meat. When a COVID-19 outbreak hit the JBS slaughterhouse in Grand Island, Nebraska, it spread to the community to kill more than 26 people, most of whom were in the city’s nursing homes.  The virus spreads easily in packing houses and nursing homes, and where there is an outbreak in one kind of facility there are often outbreaks in the other.

How did we get here? The massive depopulation of rural America combined with the cult of efficiency that guides our every action as a nation.

For most of history, aging was not a “problem.” For one thing, fewer people reached old age, and those that did lived with their family.  They cared for children and the sick, gardened, cooked, cleaned, told stories, and mediated disputes. As people moved to cities, space became expensive. Every square foot cost money and too often children could not afford to take in and care for their parents.

This movement away from farms and small towns toward cities set in motion a series of events in rural America that is still unfolding. Farms grew larger, rural towns and cities grew smaller, commodity, livestock, and poultry production and processing concentrated, and all of this was driven by the cult of efficiency.

Consider what many of us have learned about how pigs are raised and turned into food. Most pigs are raised in large, complex confinement operations and reach a market weight (around 282 pounds) in 22-26 weeks. Slaughterhouses are organized to receive shipments of tens of thousands of nearly identical pigs a day. When this ultra-efficient supply chain is interrupted, either at the production or processing end, chaos results.

As we transformed ourselves into an urban nation, we began to confine our impoverished elders, our livestock, and our poultry in strikingly similar ways. In both settings, the low-wage workers that care for the old and cut up animals and birds are often poor people of color and immigrants.

And now, in the face of this horrible pandemic, we have classified these poor workers, the ones who care for our elders and prepare our meat, as essential. Though rules differ from state to state, if you are an essential worker who refuses to go to work for fear of catching COVID-19, you can lose your right to unemployment insurance and so, under some circumstances, you must choose between risking your life at work or going without a paycheck.

Often, essential workers are poor, living paycheck to paycheck. Many do not have paid sick days and some that do are fearful to taking them because of managerial retaliation. This twisted combination of low pay without sick days causes workers to show up to work no matter their condition, worsening the public health crisis.

It is time to slow down and ask ourselves why we have turned our nursing homes and slaughterhouses into death traps for our elders, those who care for our elders, and those who prepare our food. Nobody wants sick people processing our food and caring for our elders.  It’s in everyone's self interest to advance policies that change the way we do both.  There are alternatives.  It’s time to pursue them.

We should guarantee universal paid sick days, affordable health care, and a living wage for every worker in the United States. These commonsense policies will ensure that people infected with a contagion stay home when sick and avoid infecting others. These polices will make everyone safer, protect our elders and our food supply, and allow the economy to reopen sooner. Public health is good for business and for workers.

Are we meeting that test?