How Could 400 Years of Denied Humanity Find Voice in a Whisper?

Leonard Steinhorn is a professor of communication and affiliate professor of history at American University, a CBS News political analyst, author of The Greater Generation: In Defense of the Baby Boom Legacy (2007) and co-author of By the Color of Our Skin: The Illusion of Integration and the Reality of Race (2000). He also serves on the HNN Advisory Board. 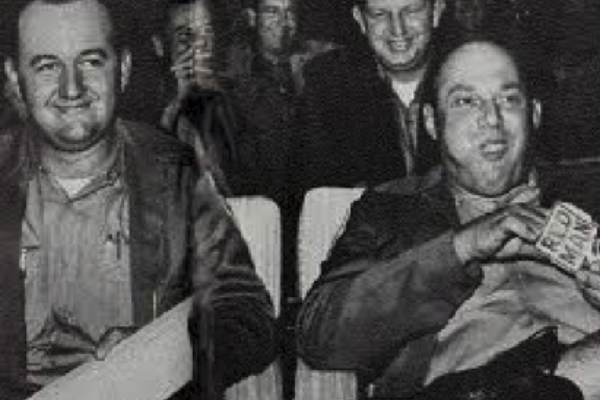 Neshoba County (MS) Deputy Cecil Price (l) and Sheriff Lawrence Rainey enjoy a moment of levity and a chaw at their arraignment for the murders of three civil rights activists.

George Floyd’s killing was the tragic act, the coronavirus’s impact on African Americans the stage setting, but the drama unfolding in our streets today has been 400 years in the making. Politicians who don't grasp that -- not only the benighted ones who proclaim law and order but also those well-intended who offer mere anodyne words of healing -- risk losing an entire generation of young people who will tune them out because they are primed and ready for transformation and change.

Images have power, and perhaps what brought people to the streets was the video of a callous, indifferent police officer, hands in his pockets, seemingly unbothered  as his knee crushed the life out of George Floyd. Such contempt and dehumanization are little different from the horrific postcard images of lynchings that  gloating bystanders mailed to friends and family in the 20th Century.

But the murder of George Floyd is, sadly, nothing new. It is the latest in a long line of police violence toward black Americans. Harlem blew up in 1964 after a police officer killed an unarmed 15-year old boy. The 1960s riots in Watts, Newark, and Detroit were all triggered by police arrests and excessive force. Then you have the police who worked with the Ku Klux Klan throughout the South, a cozy relationship best illustrated by the Life Magazine photograph of the smug and scoffing Neshoba County Sheriff Lawrence Rainey and Deputy Cecil Price as they were being arraigned for the 1964 Freedom Summer murder of civil rights activists James Chaney, Andrew Goodman and Michael Schwerner.

Nor is it only the police. It's the judicial system as well, which for years imprisoned black people for the smallest of crimes but exonerated whites who committed murder. Think of the 1955 landmark case of Emmett Till, whose avowed killers were acquitted by an all-white jury in just over an hour; they would have rendered the verdict sooner had they not taken a cigarette break. Impunity for whites who committed violence against black people was a staple of Southern justice. When the FBI dredged Mississippi's Pearl River looking for the bodies of Chaney, Goodman and Schwerner, they didn't find the civil rights workers but instead uncovered bodies of decapitated black men with their hands tied behind their backs with barbed wire. "If we keep doing this, we'll be dredging up bodies for months," one FBI agent said.

Today that same judicial system incarcerates black people at five times the rate of whites. A similar proportion of black and white people use drugs, but black people account for a third of those imprisoned for drug offenses in state facilities. Black children who commit similar crimes as white children are 18 times more likely to be tried as adults. In 2012 the Department of Justice sued Meridian, Mississippi, for creating what was essentially a school-to-prison pipeline in which authorities routinely handcuffed, arrested and jailed students without probable cause for what would typically be considered school disciplinary issues, such as refusal to follow the directions of a teacher or simply disrespect. Students on juvenile probation because of these arrests were regularly imprisoned for dress code violations, flatulence in class or using the bathroom without permission. These punishments “shock the conscience,” the lawsuit stated.

But our original sin seeps into the body politic beyond the organs of law enforcement. It was the authority of government that sanctioned enslavement, segregation and Jim Crow. It was the authority of federal agencies and local governments in the mid-20th century that allowed the redlining of neighborhoods—across the nation, not only in the South—to prevent black families from seeking their American Dream. It was the United States Public Health Service that conducted the odious Tuskeegee experiment, treating black men as human guinea pigs by refusing to inform them of their syphilis diagnosis, withholding treatment with available drugs,  and cruelly observing for the sake of medical science their grueling decline and death.

In essence, the African American experience with government authority -- at all levels -- has led to a general distrust of any goodwill expressed by even the most sincere politicians. Yet when black Americans called on that same government to right the wrongs of the past and redress the imbalances of the present -- through affirmative action, desegregation and anti-poverty programs -- many whites responded with grievance, resentment and objections to what they viewed as special privilege bestowed undeservedly upon African Americans.

So this moment is 400 years in the making. And this youth generation – by some survey evidence the least prejudiced, most inclusive in our history, thoroughly multicultural and multiracial -- is primed to seize the moment and make change.

Pundits are likening today's protests to 1968, when communities erupted after the assassination of Martin Luther King. But it's important to note why King went to Memphis in 1968, where he was gunned down.

King understood that the gains of the civil rights movement were necessary but not wholly sufficient. During the Watts riot in 1965, a teenager came up to him declaring "We won!" A shocked King replied, "What do you mean, 'we won'? Thirty-some people dead, all but two are Negroes. You've destroyed your own. What do you mean, 'we won'?" And the young man said, "We made them pay attention to us." So when King went to Memphis on behalf of striking sanitation workers, who had few rights and faced such disregard for their lives that one was crushed to death in a malfunctioning truck, the placards they held high didn't demand rights or laws or even wage increases, but simply said, "I Am A Man." It was about human dignity.

Fast forward 52 years to today. Police brutality is the immediate cause, but the protests today are really about much more -- about human dignity, about ending the dehumanization of fellow Americans simply because of who they are and how they were born—and ending the gross inequalities in housing, education, work, and justice that reinforce and encourage that dehumanization. They are the contemporary version of "I Am A Man." Dehumanize someone and it's easy to deny them a job or their children a future. Dehumanize them and it's easy to think your kid shouldn't attend school with them. Dehumanize someone and it's easy to end their life with a knee on their neck. To the protesters today, this dehumanization must end.

In his 1963 Letter from a Birmingham Jail, Martin Luther King wrote about tension and justice. "I must confess," he said, "that I am not afraid of the word 'tension.' I have earnestly opposed violent tension, but there is a type of constructive, nonviolent tension which is necessary for growth. Just as Socrates felt that it was necessary to create a tension in the mind so that individuals could rise from the bondage of myths and half truths to the unfettered realm of creative analysis and objective appraisal, so must we see the need for nonviolent gadflies to create the kind of tension in society that will help men rise from the dark depths of prejudice and racism to the majestic heights of understanding and brotherhood."

To King, it would be wrong to prefer "a negative peace which is the absence of tension to a positive peace which is the presence of justice." We need not fear tension if it leads to justice, he argued. The civil rights era proved that. True, we've seen too many periods of tension lead to lip service and good intentions but not to results or change. But we cannot take the risk of staying silent. Politicians, take note of this new generation rising up. As King wrote back in 1963, “years of humiliation, abuse and deprivation cannot be expected to find voice in a whisper.”