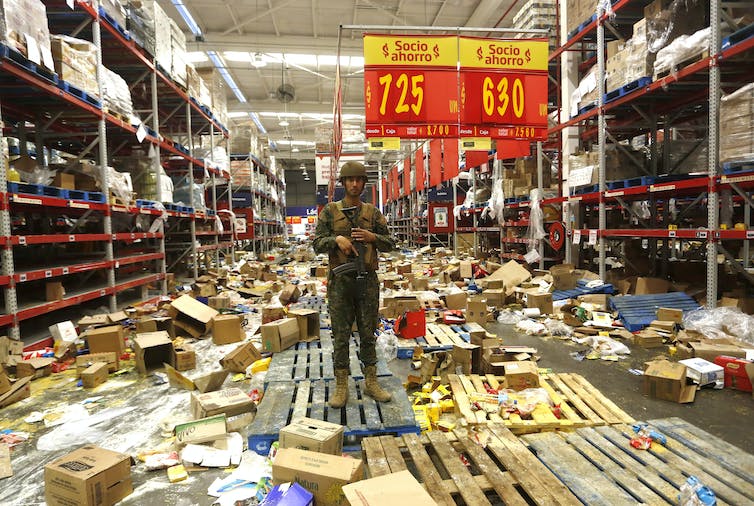 President Donald Trump on June 7 withdrew National Guard troops from Washington, D.C., but his threat to “deploy the United States military and quickly solve the problem” of civil unrest following the police killing of George Floyd continues to fuel a firestorm of debate.

Calling upon the armed forces to restore order is rare in a democracy. Militaries are trained for warfare, not policing, and their use to quell protests politicizes the armed forces.

Latin America knows this all too well. The region has a long history of using the armed forces for political purposes under civilian, elected governments. In many cases, the result was military dictatorship. Even after civilian government resumed, restoring full democracy was a challenging process, my research on the region’s civil-military relations shows. For democracy to succeed, militaries have to respect civilian authority and renounce internal policing.

Even strong democracies have unraveled when the military was brought in to quell protest. Uruguay in the 1960s, Venezuela in the 1980s and Chile just last year provide insights.

Historically, Uruguay has been known for its social welfare policies, respect for civil rights and longstanding democracy. But in 1968, economic instability triggered mass protests by university students and labor unions, leading President Juan Pacheco to declare a state of emergency and call upon the military to quash the demonstrations.

Instead of disbanding, social movement activism increased and the nascent Tupamaros, a Marxist guerrilla group, were emboldened.

Responding to Pacheco’s show of force, the Tupamaros took up high-profile kidnappings to show that the government was, in fact, weak. In defending against the insurgency, government became dependent on the military as a political ally.

By 1973, the military took over in a coup that inaugurated a brutal 12-year dictatorship. 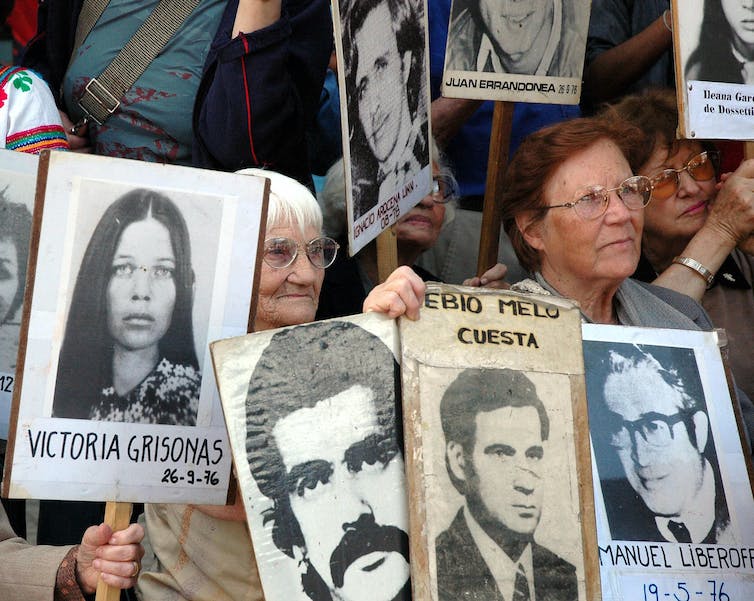 Families of those ‘disappeared’ during Uruguay’s military dictatorship outside the Legislative Palace in Montevideo in 2005. Pablo Porciuncula/AFP via Getty Images

The Uruguayan military’s transformation was remarkable: It went from being relatively obscure to becoming the most brutal component of the Uruguayan state. Between 1973 and the restoration of democracy in 1985, hundreds were killed, and one in every 30 adult Uruguayans was detained, interrogated or imprisoned.

Despite the return to democracy, the military has largely avoided accountability for its crimes. To date fewer than 10% of nearly 200 cases of human rights violations from that period have been prosecuted.

Venezuela today is a chaotic authoritarian state. But from the 1960s through the 1980s, it had a stable two-party democracy and oil-fueled prosperity. Those pillars collapsed in 1989, after oil prices tanked and the country faced a debt crisis.

In response, President Carlos Andrés Pérez imposed austerity measures. In the capital of Caracas, the public reacted with protests and riots in the wave of unrest known as the “Caracazo.”

Pérez suspended civil rights, declared martial law and put Venezuela’s military on the streets for the first time in decades. In quelling the revolt, security forces killed at least 400 civilians.

The brutal repression – carried out mostly against the country’s poorest populations – produced division within the armed forces. Many junior officers resented the order to repress their people.

Among these officers was Hugo Chávez, who would go on to stage a failed coup attempt in 1992. Six years later, he legitimately won the presidency with an anti-establishment agenda. Ultimately, Chávez’s election marked the complete dissolution of Venezuela’s two-party system and the birth of a militarized, autocratic state that blooms in full failure today under his successor, Nicolás Maduro. 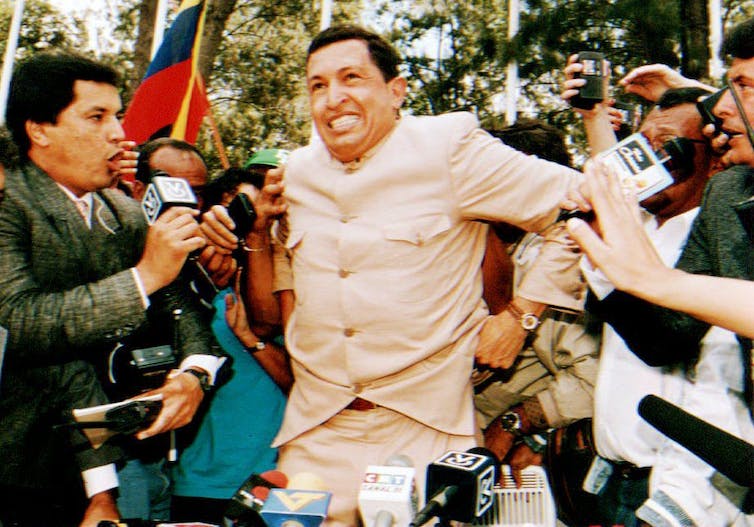 Lt. Hugo Chávez in 1994 being freed from jail after an attempted coup in Venezuela. Bertrand Parres/AFP via Getty Images

Chile is often heralded as Latin America’s “model” democracy for its economic growth and political stability. Yet last year, it became the epicenter of mass protests that shook Latin America.

Chile’s protests began over transit fare hikes driven by President Sebastian Piñera’s economic belt-tightening but quickly grew to a wave of demonstrations in multiple cities calling for long-pending reforms to address inequality. Soon, protesters were demanding a new constitution to replace the one drafted 40 years earlier during the Pinochet military dictatorship.

In response, Piñera declared “we are at war” and deployed the military to oversee a state of emergency – its first political policing role since the dictatorship ended in 1990. In the ensuing months, dozens of protesters were killed, hundreds more injured and over 28,000 arrested.

Though the most violent repression is attributed to police, Piñera’s move created challenges for Chile’s military, which struggled in the post-Pinochet era to redefine its image by focusing on national defense and United Nations-led international missions. 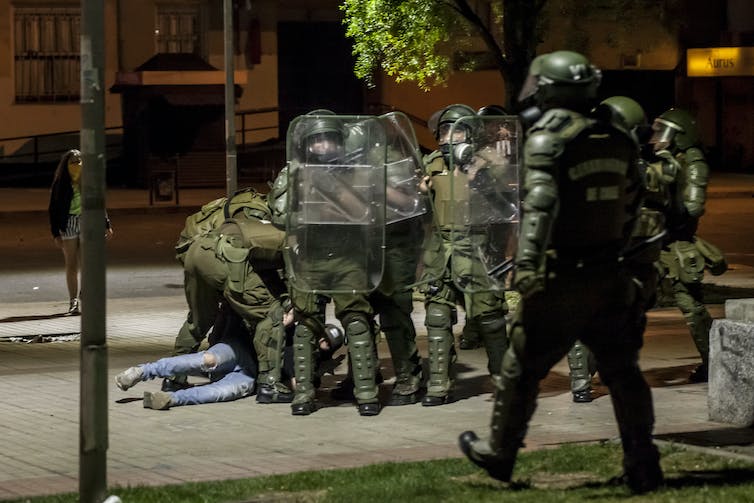 “I’m not at war with anybody,” said the general tasked with overseeing security in the capital last year, distancing himself from the president. The military also apparently resisted Piñera’s efforts to extend the state of emergency, arguing that the protests were a “political problem.”

Although Chile’s democracy has not unraveled, its political culture has been upended. Public support for democracy had already declined 20% before the protests, yet the military remained one of Chile’s most trusted institutions. The militarized repression that occurred will likely erode confidence in the armed forces, too.

This widespread distrust occurs just as Chileans decide whether, and how, to write a new constitution.

As in Chile, in the U.S. numerous officials – including former Pentagon officials and retired military officers – are raising alarm over President Trump’s threat to militarize the protest response. Yet 58% of American voters approve of his stance, according to a recent survey.

One key lesson from Latin America is that democracy rarely breaks down suddenly. Countries slide gradually into authoritarianism as leaders curtail civil rights, demonize opposition groups and muzzle the press.

Another is that professing “law and order” through militarization does not solve a country’s systemic problems. It only deepens divides – and imperils democracy.