Paul Starobin is the author of A Most Wicked Conspiracy: The Last Great Swindle of the Gilded Age, on sale from PublicAffairs Books June 30. 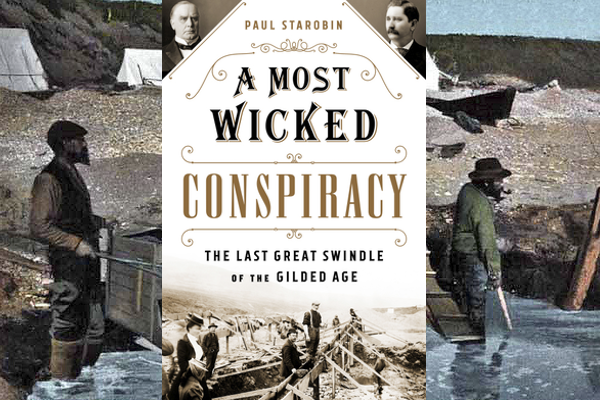 Gold! With the discovery of this treasure in bountiful quantities, the Alaska gold rush of 1900 became the maddest dash of its kind since the 49ers swarmed California a half century earlier. The gold fields of Cape Nome, jutting out into the Bering Sea, could be reached by steamer from Seattle in two weeks, icebergs permitting. Most tantalizing of all, Cape Nome’s gold could be easily found in the ruby-colored beach sands that stretched for many miles along the coast. “Few men become rich by slow economy,” a railroad flier proclaimed. “Fortunes are made by men of nerve and decision who take advantage of opportunities…WOULD YOU LIKE TO BE A MILLIONAIRE?”

But the idea that “few men become rich by slow economy” was not limited in its appeal to the honest toiler with shovel in sweaty palm. The titans of this time—the ‘Robber Barons’ of industry and finance—also cast a posessive eye on the gold bounty.

The lure of Alaska’s riches gave rise to a brazen plot involving the outright capture of a federal district court in Alaska— the takeover of nearly all the mechanisms of law and law enforcement in Cape Nome. The mastermind was Alexander McKenzie—Big Alex as his friends from the Dakotas called him. McKenzie, a former frontier sheriff, was a political boss—a mogul in the Republican Party, a maker of U.S. Senators, a man with tight connections to the Executive Mansion, as the White House was then called, and to the nation’s most powerful business magnates.

Naturally, McKenzie planned to give his friends a cut of his venture. This was, after all, the time in American life known as the Gilded Age, and the bosses operated like lords of the realm, dispensing and receiving favors as a matter of course.

Nowadays, America is in the midst of what might be called a New Gilded Age. The era is marked, as was the original gilded age, by a “rigged game” (to borrow the phrase of Senator Elizabeth Warren of Massachusetts), a system of crony capitalism and crony politics. Most recently, the new coronavirus has exposed the entrenched inequities of today, with Senators selling stock to try to ‘front-run’ the crisis, big-wigs snagging tests ahead of ordinary folks, and physicians hoarding anti-virus medicines so they can write prescriptions for themselves and family members.

Human nature, no doubt, is often selfish. A gilded age, though, is distinguished by a kind of concentrated venality, as the craving for private gain at the expense of the public interest and trust emboldens grabs for power that become almost impossible to thwart.

McKenzie, possibly through the payment of bribes to members of the Senate, got his Alaska judge. He made off for Cape Nome and had the judge appoint him legal custodian of lucrative gold properties. With this position secured, the plan was to use the court to pry the mines away from their rightful owners and deposit the assets in a shell company controlled by McKenzie. The company would then issue stock on Wall Street, with Big Alex unloading his shares (and those he kept in a secret trust for his buddies) on unsuspecting buyers in the public.

It nearly worked. But the scheme, ultimately, was foiled by indignant miners, a muckraking press, and righteous judges on a federal appeals court in San Francisco. The judges grasped what McKenzie was up to, and when the boss defied their order to stop his plundering of the gold, they sent U.S. marshals to Cape Nome to arrest him. He was convicted of contempt of court and sentenced to jail time in Oakland. Resourceful as ever, he concocted a story about how he was near death from an incurable ailment. His friend, President William McKinley, intervened and freed him from captivity. But while Big Alex lived for decades afterward, he never made it back to Alaska.

McKenzie’s plot to corner Alaska’s gold proved to be the last great swindle of the original gilded age, as this seamy chapter in our national life gave way to what become known as the Progressive Era. America enacted the Seventeenth Amendment to provide for the direct popular election of Senators, so that bosses like Big Alex could no longer use their control of state legislatures to send pet choices to Washington.

Such reforms, of course, always fall short of perfection. Still, America seldom proves as malign or feckless as critics portray the country. A gilded age, whether of the nineteenth century or of the twenty-first, dies not out of exhaustion, but because the people rise up and will its demise.