Re-stabilizing the Middle Class and the Poor: Lessons from the 1930s

David Stebenne is a specialist in modern American political and legal history, and the author of Promised Land: How the Rise of the Middle Class Transformed America, 1929-1968, which will be published by Scribner on July 14. 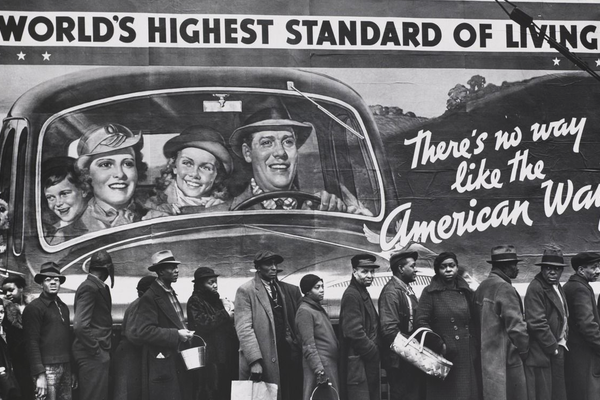 Margaret Bourke-White, "At the Time of the Louisville Flood," 1937

1940-41 were the last two years of the Great Depression, whose single most disturbing feature, economically speaking, was persistent high unemployment. Perhaps the best definition of the Depression in economic terms was a time of double-digit unemployment, something that began in 1931 and lasted until the end of 1941.  Economists now estimate that such will be the case for the remainder of 2020, and perhaps longer.

Persistent high unemployment during the 1931-41 period had profound consequences.  Suddenly, many people who thought of themselves as middle class became economically insecure and stayed that way for a long time.  And for the poor, especially those living in cities and towns, mass unemployment created a genuine crisis.  Unlike poor people living in the countryside, the poor in metropolitan areas could not grow their own food or forage for food or build their own shelter.  The sudden end of cash income typically brought immediate hunger and often dispossession (for failure to pay rent).

One major consequence of that situation was a big increase in crime, as theft became common.  By 1933, crime rates reached record highs.  Along with that came more protests, as desperate people began to demand more help from the government.  Protests at local relief offices became common in the early 1930s, often instigated by people associated with the American Communist Party.  So did direct action to block evictions and farm foreclosures.  More crime and social protests meant, of course, more clashes between the people and the police, sometimes with explosive consequences, which has also become all too familiar again.

There were racial implications to all of this during the Depression, like today, because many of the poorest people, in cities especially, were African American.  As a Darwinian struggle for what few jobs there still were began in the early 1930s, urban black people typically fared the worst.  There were issues of gender at work here, too, as a kind of job rationing mentality took hold that decreed that there should be no more than one well-paid job per household, something that tended to push married women out of the paid labor force if their husbands had work.  And when New Deal relief programs began, a similar pattern took hold, in which most of the jobs created by the WPA, the main New Deal jobs agency, went to white men.  Even many white businessmen who ran retail establishments in predominantly black neighborhoods refused to hire black people, preferring instead to keep the jobs for their own (white) friends and relatives.

In Harlem, the nation's most heavily populated black neighborhood, those conditions produced an uprising in 1935, which was triggered by a false rumor that a black teenager picked up for shoplifting at a dime store had been beaten to death by employees there.  Only in the aftermath of that event, which produced an estimated $2 million in damages to white-owned businesses, three deaths, and hundreds of serious injuries, did the government begin opening more WPA jobs to black applicants.  New York City mayor Fiorello La Guardia also began pressuring white business leaders in Harlem to begin integrating their workforces.  That combination created more opportunity in Harlem and was duplicated in other places like it.

Those changes marked a major shift in how the establishment of that time addressed the plight of urban black people.  During the 1920s, the emphasis had been on increasing support for black artists and intellectuals, something that helped encourage what became known as the Harlem Renaissance.  By the end of the 1930s, the emphasis had shifted to creating more employment opportunities, for black men especially.  That approach wasn't unique to the black community.  An emphasis on creating more well-paid jobs, for white, male breadwinners especially, was part of the New Deal vision from the start of the Roosevelt presidency and was its preferred route to re-stabilizing the middle class and the poor.

For a long time it seemed as though the 1930s era of high unemployment was a kind of “great exception” in American history, but now it has appeared again, suddenly and unexpectedly, just as it did in the early 1930s.  So, too, has higher crime, more social protest, increased clashes with the police, and a grim competition for what few good jobs there are to be found.  All of these things are related, as they were in the Great Depression.  One key difference, however, is that the racial dimension is more widespread this time, reflecting a major shift in where black people now live.  In the early 1930s, almost 80% of African Americans lived in the South, which at that time was still a predominantly rural place with few cities.  None of that is true today.  Over 40% of the black population lives in the North now, mostly in major metro areas, and the South has become much more urban.  Today, statistically speaking, the typical black person lives in a major metropolitan area, in either the central city or a nearby suburb, meaning that high unemployment now has an even greater impact on the African American community in some ways than it did during the Depression because many poor black people today cannot engage in the kinds of self-help that they could when more of them lived in rural areas.

A second key difference today has to do with gender.  A much higher fraction of women are in the paid labor force now than was the case when the Great Depression began.  The fraction of all women who are unmarried is also higher now. Thus, taking a New Dealish approach of prioritizing employment for men would have much more socially explosive consequences today.  Like the changes in where black people live, changes in the status of women mean that an effective response to high unemployment is not only urgently needed – it also needs to be updated to reflect new social realities.