The Hate-Mongers: Characterizing Racism in Comics 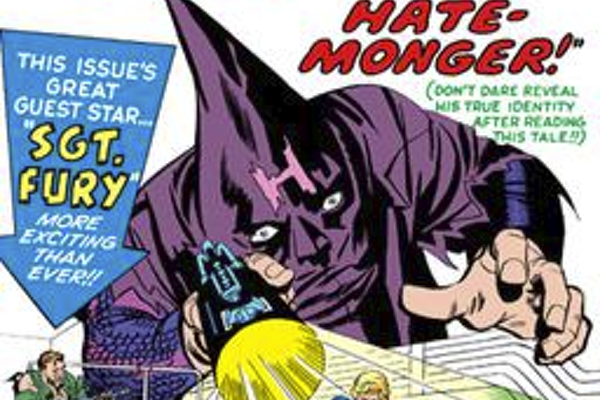 In 1963, as the Civil Rights Movement was making its presence increasingly felt, writer Stan Lee and penciler Jack Kirby introduced the Hate-Monger in the pages of Fantastic Four #21. Wearing purple KKK-style robes, inciting xenophobic outbreaks with his hate speech, and wielding an H-ray that could transform even peaceful heroes into unthinkingly enraged combatants, the Hate-Monger stokes the American animosities towards nonwhites that civil rights activists struggled against. Ultimately defeated by the Fantastic Four, the Hate-Monger is unmasked as… a clone of Adolf Hitler! The big reveal at story’s end affords Mr. Fantastic—and, through him, Lee—the opportunity to deliver a brief but clear sermon on the importance of building a world like that the activists at the time were fighting for, one in which “men truly love each other, regardless of race, creed, or color…”

However, Lee’s broader critique—that Americans had racial issues even before the arrival of the Hate-Monger—was ultimately obscured by the conventions of superhero narratives: a villain has tried to divide Americans along racial and ethnic lines, but the heroes thwart his nefarious plans. Readers don’t, in other words, depart worried (or even thinking) about fixing deeper ills in American society; they leave instead with a warm sense of triumph that reinforces their faith in their country. This takeaway allows readers to feel good about American ideals without spending much time pondering the more troubling truths surrounding systemic problems in the American populace and their institutions that both Lee and the Civil Rights Movement signaled.

In the early 1990s, within the context of an ascending multiculturalism, a second version of the Hate-Monger arrived in Avengers courtesy of writer Fabian Nicieza and artists Steve Epting and Tom Palmer. This version, a pale-skinned energy being clad in black leather, is essentially a living version of the original’s H-ray, both fueling and feeding off people’s hatred. As before, racism and xenophobia external to the story but endemic to US society manifests, as the Rodney King beating serves as the story’s backdrop. New York City finds itself divided after videotaped evidence surfaces of three cops beating a defenseless 15-year-old Latino, a situation that likewise resonates today. The Avengers are drawn into the unrest, battling white supremacists in league with this new Hate-Monger. Though this story ends less concretely than the earlier one—the Hate-Monger simply dematerializes, to return sometime in the future—it remains steeped in the Manichean conventions of the superhero. Good, to the extent it triumphs over evil, does so because of individual rather than systemic change. To that point, the black Avenger Rage is convinced by Captain America not to succumb to his own anger in combatting the Hate-Monger’s, a climax that unfortunately puts an onus for change on nonwhites as well as a damper on more direct action in the name of fostering such change. It’s as if Captain America tells Rage, again echoing King, that it is his—and through him, all black people’s—responsibility for “all” to “get along.” The message is muddied further by an epilogue depicting the Hate-Monger incarnated as a black agitator, suggesting, to use the parlance of today, that there are bad people on “both sides.”

These Hate-Mongers tell us quite a bit more about ourselves than Americans want to acknowledge to this day. An obvious analogy presents itself: President Trump is another in a long line of real-life Hate-Mongers, playing to underlying American racism to build his power. But to leave the analysis there—tempting as that may be—paints entirely too simplistic and rosy a picture. It might be comforting to tell ourselves that Trump is the root cause of our current troubles. He will, eventually, leave office. But our racial problems won’t just exit with him. The Hate-Mongers’ repeated (and perhaps repetitive) returns teach us at least this much. As protestors take to the streets today, asserting the basic truth that Black Lives Matter and demanding, for instance, that we “defund” the police (by reinvesting some of that money into social service programs), they are in fact demanding that we not only have a real conversation about the system but that we then act to change its inequities.

Americans, however, still largely want to think about the problem in individual terms: it’s the president, or a few “bad apples” among the police, or the occasional racist person that pops up in American society. Conveniently, then, they don’t have to think about larger, systemic issues. Nor do they have to think about how that very system fosters this kind of thinking in the way it limits their choices. To wit: the upcoming Presidential election. It would be comforting to believe that electing Joe Biden will fix our problems, even if such thinking requires Americans to ignore his past record on criminal justice reform. Putting a kinder, gentler face on neoliberal policies not all that far removed from the current president’s, in reality, amounts to little more than a shuffling of deck chairs. Protestors are demanding that we reframe the issue as a systemic one, and, in so doing, present us with an authentic option that the November election seems unlikely to provide. They insist that Americans recognize that the “choice” offered by the system (both in the fall and more generally) doesn’t allow for significant changes in that very system. And without such changes, meaningful reform can’t happen.