The 1976 Election: Why We Can't Predict Vice Presidential Selections in Advance

Daniel K. Williams is a professor of history at the University of West Georgia and the author of The Election of the Evangelical: Jimmy Carter, Gerald Ford, and the Presidential Contest of 1976 (University Press of Kansas, 2020). 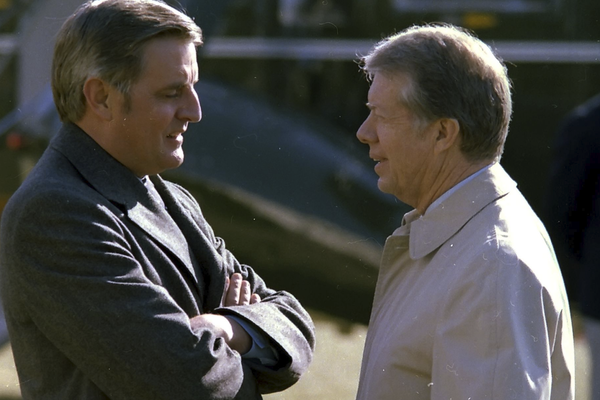 There’s a reason why vice presidential picks are impossible to predict: Even the presidential candidate who makes the decision rarely knows the choice in advance, because the final selection usually depends on an eleventh-hour turn of events that no one can fully anticipate.  This was the case in the 1976 election, a rare moment when not two, but three, major-party candidates selected running mates.  And in each of the three cases, the choices were eleventh-hour selections that pundits did not expect.

The vice presidential selection process held more importance than usual in 1976, because when the primaries ended in early June, neither the Republican incumbent Gerald Ford nor the Democratic frontrunner Jimmy Carter had enough delegates to secure his party’s nomination.  Though Ford held a slight lead over his challenger, California governor Ronald Reagan, a grueling neck-and-neck primary race had left neither the conservative insurgent Reagan nor the centrist Ford with enough delegates to claim the nomination outright.  Carter had a much more formidable lead over his primary opponents than Ford did, but a divided Democratic Party – with delegates split between multiple liberal candidates who still refused to concede after the last primary – meant that it was still theoretically possible for the party liberals to deprive the centrist Carter of the nomination if they could agree on a single alternative candidate.  Fortunately for Carter, they did not, but the divisions in their parties meant that for both Carter and Ford, picking a running mate was about more than personal preference or general election considerations; it was also about uniting a fractured party in order to win over some wavering convention delegates and appease disgruntled party activists who had supported another candidate in the primaries.

To the surprise of almost everyone, Reagan was the first to announce his choice of running mate.  Traditionally, candidates had waited until they were assured of their party’s nomination to pick a potential vice president, but Reagan’s campaign manager, John Sears, thought that the California conservative’s best chance of winning the nomination was to shake up the process by selecting Ford delegate Richard Schweiker, a moderately liberal Republican senator from Pennsylvania who, Sears hoped, would bring the rest of the Pennsylvania Republican delegation into the Reagan camp and maybe peel off a few Ford delegates from the New York delegation as well – which would be enough to give the nomination to Reagan.

The gambit failed badly.  The other Pennsylvania delegates refused to back Reagan.  And Reagan lost support from conservative southern delegates who felt betrayed that their candidate had picked a northern moderate liberal in apparent opposition to his conservative principles.

For the Ford campaign, Reagan’s selection of Schweiker was a lesson in what not to do.  Ford resolved to spend the next few weeks carefully vetting each potential vice presidential candidate and selecting someone who would unify the party while also remaining fully compatible with the ideology of his own centrist Republican campaign.  Yet ultimately, the selection process ended up becoming far less organized or predictable than Ford anticipated.

Ford already had a vice president, of course: Nelson Rockefeller, the former governor of New York who for more than a decade had been the unofficial leader of the liberal wing of the Republican Party.  When Ford had assumed the presidency after Richard Nixon’s resignation in August 1974, he had selected Rockefeller because of his nearly unparalleled executive experience as governor of one of the nation’s largest states.  But to Ford’s dismay, the reaction from the conservative wing of the party was so vociferous that it fueled Reagan’s primary challenge and threatened to divide the GOP.  Faced with the possibility that it might be impossible to win his party’s nomination with Rockefeller on the ticket, Ford reluctantly notified Rockefeller in the fall of 1975 that he would not be the president’s running mate again the next year.  While Ford had never said who exactly would replace him, many both inside and outside of his campaign assumed that it would be someone more conservative.

But this was not Ford’s desire.  Even after doing weeks of interviews, public opinion polling, and vetting of potential candidates, Ford arrived at his party convention without having selected a running mate.  All but one of the finalists on his list were either party centrists or moderate liberals – not conservatives in the Reagan mold.  Those closest to Ford believed he was leaning toward one of the most liberal on the list – William Ruckelshaus, a former head of the Environmental Protection Agency (EPA) and deputy attorney general who had earned a reputation for honesty when he resigned rather than carry out Nixon’s orders during the Watergate scandal.  Years later, Ford said that he had actually wanted to select Anne Armstrong, an ambassador who was opposed by some of the president’s advisors who noted that public opinion polling indicated that placing a woman on the ticket would result in a net loss of votes.

Among delegates, there was strong support for Reagan as a vice presidential candidate, a move that would have created a Republican unity ticket that would presumably help Ford in the conservative South, a region that would otherwise likely go to Carter.  But Reagan insisted that he would never accept the number-two spot, and Ford, who was angry with Reagan for challenging an incumbent president in his own party, was not eager to offer it to him.  Instead, Ford met with Reagan at the convention and asked him which candidate he would accept.  Reagan mentioned Bob Dole, a moderately conservative senator from Kansas who had not been on Ford’s list of finalists.  Ford was not immediately inclined to accept Reagan’s suggestion, but after mulling it over throughout the night and talking with his advisors, he decided that Dole would be the best candidate.  He could mollify party conservatives, solidify Ford’s support in the farm states (a normally Republican region that was threatening to break for Carter), and perhaps even help the campaign make inroads in the South.  On the morning of the final day of the convention, Ford announced that Dole was his choice.  Dole barely had time to write an acceptance speech.

Compared to Ford’s eleventh-hour selection of Dole, the Carter campaign’s vice presidential selection process was supposed to be much more orderly.  The campaign determined early on that Carter needed to select a northern senator to balance a ticket headed by a southern governor without Washington experience, and there was a general assumption that Carter’s running mate would probably be more liberal than he was (since nearly all northern Democratic senators were to the left of the fiscally conservative, socially moderate Carter).  Some of Carter’s advisors encouraged him to pick a Catholic, since he was initially not polling well among northern Catholics.  Carter ignored some of this advice.  He allowed his campaign aides to draft a list of potential candidates and oversee the vetting process, but he insisted that his highest priority would be to find someone who could be a potential governing partner – which meant, in his view, that the person had to be temperamentally compatible and, above all, share his values.

Carter did agree to interview one senator who seemed to fulfill all of the criteria set by his advisors: Senator Edmund Muskie of Maine, a Catholic with strong working-class roots who had been Hubert Humphrey’s running mate in 1968.  But the interview with Muskie did not go well.  Carter was disturbed by Muskie’s temper, and he crossed the Maine senator off his list.

At the start of the Democratic convention, some journalists assumed that the frontrunner for the number-two position was John Glenn of Ohio, a former astronaut who was serving his first term as senator.  But Glenn’s bland keynote address at the convention sank his prospects.  By contrast, Representative Barbara Jordan of Texas gave such a rousing address highlighting issues of race and social justice that some African American delegates insisted that she be selected for the vice presidency – a move that would have made her not only the first woman, but also the first Black American, selected for a major-party ticket.  But Carter, in the end, settled for someone much more traditional.

Carter’s advisors had not initially considered Senator Walter Mondale of Minnesota the best candidate for the position.  After tentatively exploring a presidential bid a year earlier, Mondale had ended his campaign almost as soon as it began, saying that he did not want to spend the next year “sleeping in Holiday Inns.”  Some in the party questioned his stamina.  And within the Carter campaign, pollsters noted that Mondale would likely be a net negative for the ticket by costing the campaign votes among moderates who distrusted his liberalism.

But Carter, despite his ideological differences with the Mondale, appreciated the Minnesota senator’s impeccable reputation for honesty.  As a Baptist deacon and Sunday school teacher with a strong faith, Carter also felt comfortable with Mondale’s background as a Methodist minister’s son.  His interview with Mondale sold him on the candidate, and he selected him in spite of the warnings from his pollsters – just in time for the end of the convention.

How well did these eleventh-hour vice presidential choices turn out?  Both Mondale and Dole proved themselves to be loyal, hard-working campaigners who avoided scandal and consistently championed the ideals of their party.  Mondale’s lack of ideological compatibility with Carter’s conservative-leaning centrism resulted in tensions once Carter was elected president, but this was not evident on the campaign trail.  And Dole’s acerbic wit alienated some voters and made some Republicans regret his place on the ticket.  In the end, Dole’s place on the ticket did not win over enough southern conservatives to allow Ford to make significant inroads in the South.  But he did help keep the farm states in the Ford column.

Mondale had much less pull in the northern states than Carter’s campaign had hoped.  If Muskie had been on the ticket, Carter would likely not have lost Maine and the rest of northern New England (as he did with Mondale), and if Glenn had been selected, Ohio might not have been such a nail-biter for the Carter campaign.  (Carter carried Ohio in the end, but only by the slimmest of margins.)  But if Mondale’s presence on the ticket did not give Carter as much of a boost in the North as he had anticipated, neither did it hurt him in the South as much as some of his campaign aides had feared; Carter carried every southern state except for Virginia, even with Mondale as his running mate.  And, despite not being selected, both Muskie and Glenn continued to play important roles in national politics – Muskie as Carter’s Secretary of State and Glenn as a senator and, eventually, presidential candidate.

So, perhaps, in the end, the 1976 election shows that even if eleventh-hour vice presidential selections hinge on factors that are impossible to predict in advance, the types of candidates who emerge from these selections are usually reliable – assuming that a well conducted vetting process occurs before the final selection.  The press may not have been able to predict that Dole would be Ford’s running mate or that Mondale would be Carter’s, but both candidates generally fit the profile for the type of candidate that a vetting process might have produced.  So, although no one can know in advance the name of Joe Biden’s running mate, whoever he does select for this position is likely to look in retrospect like an obvious choice, regardless of who she may be.